MARTLs - Saco Middle School Learning Commons. A Jewish Literary Map of New York City. Visible City, Tova Mirvis “In a city that never stops changing, a glass apartment tower is slowly being built among the brownstones and pre-wars, and the paths of three couples intersect in its shadow.” 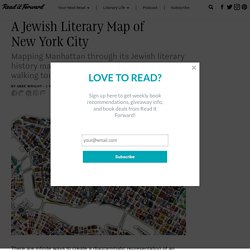 Seize the Day, Saul Bellow “Along Broadway in the Seventies, Eighties, and Nineties, a great part of New York’s vast population of old men and women lives. Unless the weather is too cold or wet they fill the benches about the tiny railed parks along the subway gratings from Verdi Square to Columbia University, they crowd the shops and cafeterias, the dime stores, the tearooms, the bakeries, the beauty parlors, the reading rooms and club rooms.” The Man in the White Sharkskin Suit, Lucette Lagnado. 10 Of Our Favorite Literary TED Talks From 2016. In 2015, our favorite literary TED talks covered everything from poems about prime numbers to fantastical book art. 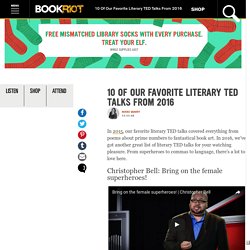 In 2016, we’ve got another great list of literary TED talks for your watching pleasure. From superheroes to commas to language, there’s a lot to love here. Christopher Bell: Bring on the female superheroes! I mean, yes. Just yes to all this. Library Journal's Best Books 2016. A Mighty Girl's Ultimate Guide to Girl-Empowering Graphic Novels for Kids. Amazon's Best Books of the Year: Critical Linking, November 16, 2016. We’re giving away a brand-new, top-of-the-line Kindle Voyage. 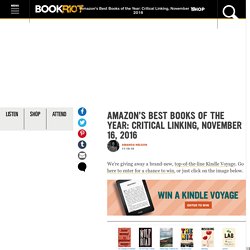 Go here to enter for a chance to win, or just click on the image below. Amazon’s Best Books of the Year lists are here, and it’s a good-looking bunch. Actress Tika Sumpter says her mother was arrested and taken into custody on Monday — all because of a $10 late fee at her local library. I’m sorry, WHAT? Dreamed up by JK Rowling, quidditch is played in the Harry Potter novels by characters who fly through the air on broomsticks. The UK now has a Quidditch Premier League! 8 Books with Queer Polyamorous Characters. We all know how important it is for readers of all kinds to see themselves reflected in the books that they read. 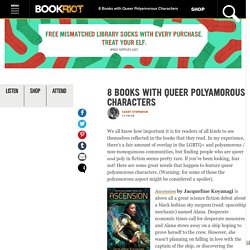 In my experience, there’s a fair amount of overlap in the LGBTQ+ and polyamorous / non-monogamous communities, but finding people who are queer and poly in fiction seems pretty rare. If you’ve been looking, fear not! Here are some great novels that happen to feature queer polyamorous characters. (Warning: for some of these the polyamorous aspect might be considered a spoiler). Ascension by Jacqueline Koyanagi is above all a great science fiction debut about a black lesbian sky surgeon (read: spaceship mechanic) named Alana.

Dreyd by Daniel Heath Justice is the third book in this Cherokee writer’s queer feminist Indigenous fantasy trilogy, so you’ll have to read the first two before getting to the polyamory bits in Dreyd. 8 YA Reads to Spark Authentic Discussions About Drugs and Alcohol. If you’ve tried talking to teens about the dangers of drugs and alcohol by using statistics alone, you have probably noticed that after 10 minutes or so, the signs of Teenage Tune-Out begin to emerge: glazed expressions, drooping eyelids, shoulders slowly slouching to the surface of the desk. 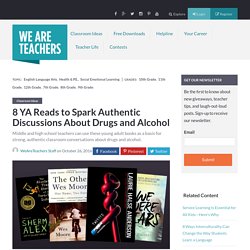 That’s because facts, data and statistics, though important, aren’t relatable enough. Students (and really, all of us) need a face, a personality, a context. We need stories. The following titles are young adult books that middle and high school teachers can use as a basis for strong, authentic classroom conversations about drugs and alcohol. These are stories about realistic, complex characters who are facing risks, tough decisions and the influence of their peers—stories that will spark discussions about the development and vulnerability of the teen brain and subsequent risk-taking behavior, the influence an environment can have on the choices a person makes, and more. Out of the Attic: Nonfiction about the Holocaust. In many of my posts, I write about how books bring me comfort (as they do for most bibliophiles). 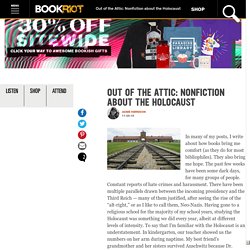 They also bring me hope. The past few weeks have been some dark days, for many groups of people. Harry Potter Book Night - Harry Potter Event Kit. Teacher Librarian Resources. Edutopia. 8 Reasons Libraries Still Matter. Do we even need libraries anymore? 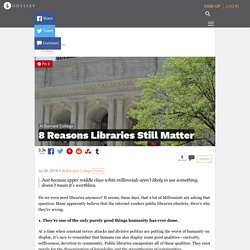 It seems, these days, that a lot of Millennials are asking that question. Many apparently believe that the internet renders public libraries obsolete. Here's why they're wrong. 1. They’re one of the only purely good things humanity has ever done. At a time when constant terror attacks and divisive politics are putting the worst of humanity on display, it’s nice to remember that humans can also display some good qualities-- curiosity, selflessness, devotion to community. 2. There aren’t many places that you can go without spending money or being enticed to do so. 3. Where can you meet and hear from Nobel laureates, respected academics, and best-selling authors? 4. This ties into the “free space” factor. 5. Another valuable facet of being a free space: public libraries are a place where homeless people can stay without fear of violence, harsh conditions, or being told to move along. 6. 7. 8.

Edutopia. Why You Should Talk To a Librarian Today.