Radical Spirituality. When you think of the Quakers, it might bring to mind porridge oats, or pacifism, or perhaps prison reform. 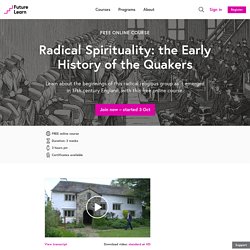 But there is much much more to the Quakers than any of these things. Agincourt 1415 - University of Southampton. The Battle of Agincourt, in 1415, is one of the most famous battles in the history of warfare, and one of the most important and memorable English victories. 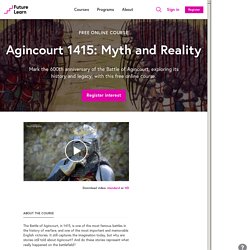 It still captures the imagination today, but why are stories still told about Agincourt? And do these stories represent what really happened on the battlefield? This free online course will explore the myths and realities about the battle, which marked its 600th anniversary on 25 October 2015. The three weeks will be led by the foremost academic expert on the battle, Professor Anne Curry. Hadrian's Wall: Life on the Roman Frontier - Newcastle University. Explore the archaeology of the most heavily fortified frontier in the Roman Empire, its people and their lives. 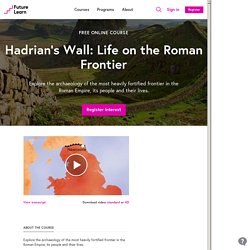 Hadrian’s Wall stretches over 73 miles (117 km), from coast to coast in what is now Northern England. The Wall, complemented by a sophisticated system of outposts and coastal watch stations, offers a remarkable glimpse of ancient society. In addition to housing one of the largest concentrations of Roman soldiers anywhere in the Empire’s provinces, Hadrian’s frontier system was home to an incredibly cosmopolitan array of civilians. This six week course offers a comprehensive introduction to Hadrian’s Wall and its people and raises fascinating issues concerning colonisation, cultural transformation, immigration, integration and imperialism. The American South - Free online course. The American South is arguably the most important, yet frequently most misunderstood section of the United States. 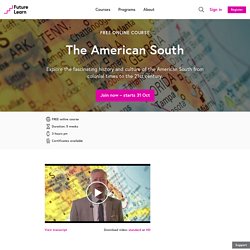 On this course you will unwrap the paradoxes of this complex region and get to grips with its fascinating history. Discover the history and culture of the American South Through this course you’ll develop a keen understanding of debates around the sources, extent, nature, and even existence of something we call “The American South”. England in the Time of King Richard III - University of Leicester. Superpowers of the Ancient World: the Near East - University of Liverpool. 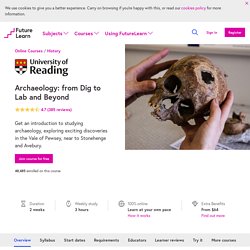 Take a virtual field trip to the Vale of Pewsey We’ll be showing you around our field school – a month-long excavation at the Vale of Pewsey, which is a relatively untouched site compared to its world-famous neighbours, Stonehenge and Avebury. The Vale of Pewsey is an archaeological treasure chest and the jewel of its crown is Marden. Built around 2,400 BC, Marden is the largest henge in the country and one of Britain’s most important but least understood prehistoric monuments. Every object has a tale to tell and we’ll investigate how archaeologists paint a vivid picture of what life was like in Neolithic times through the astounding assortment of discoveries made in this beautiful part of England. 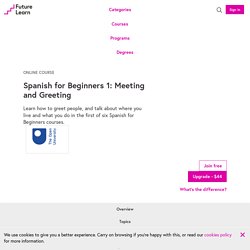 It will introduce you to the basic language, so that you are able to: greet people and introduce yourself and others; talk about where you live and where you come from; talk about what you do; talk about the languages you speak; ask for clarification or repetition when you don’t understand. Start to speak, listen, read and write in Spanish During the four weeks of the course, you will learn some of the vocabulary and phrases you need to help you interact with people at a basic level.

You will start to develop the four language skills of speaking, listening, reading and writing through a range of activities that introduce the language in authentic settings, and the audio and video resources will show you the language in action. There are some activities when you will also practise your speaking skills, as it is important that you start speaking as soon as possible! In the Night Sky: Orion - Free online course. Homo Floresiensis Uncovered - Free online course.