Adding to an online repertoire

The digital student often has to decide whether to adopt or ignore a particular application. Sometimes students are expected to adopt something as part of their course. Pearltrees is an app for curating and indeed assembling - I signed up for it nearly two years ago but had never used it.

The Digital Student Experience. Beyond the reading and discussion, we only have one activity for this block: you will have the chance to build and develop the work you do here in a sustained way over the three weeks, and this work will form the basis of much of the blogging that takes place in this block of study.

The students on this course have produced some fabulous Pearltrees – christinesinclair

The aim of the activity is to begin to map and chart something of the sociomaterial complexity of being a (digital) student, to attempt to start to visualise and think-through the social and material entities which converge around the act of learning, and the state of ‘being a student’. 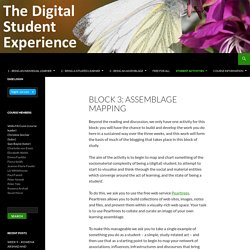 To do this, we ask you to use the free web service Pearltrees. Pearltrees allows you to build collections of web sites, images, notes and files, and present them within a visually-rich web space. Your task is to use Pearltrees to collate and curate an image of your own learning assemblage. and so on…. In terms of technical guidance for completing this task, Pearltrees is pretty straightforward:

This is the company that offered her cheaper calls. The router arrives in a week or so. I rig it all up temporarily. This will be my first Pearltree! It's on my laptop. MacBook. This article is about the Apple Inc. computer called "MacBook". 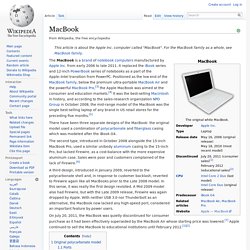 For the MacBook family as a whole, see MacBook family. The MacBook is a brand of notebook computers manufactured by Apple Inc. from early 2006 to late 2011. It replaced the iBook series and 12-inch PowerBook series of notebooks as a part of the Apple–Intel transition from PowerPC. And on my iPad too. iPad 2. Not to be confused with iPad Air 2 or iPad Mini 2. 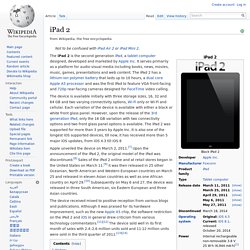 The iPad 2 is the second generation iPad, a tablet computer designed, developed and marketed by Apple Inc. It serves primarily as a platform for audio-visual media including books, news, movies, music, games, presentations and web content. The iPad 2 has a lithium-ion polymer battery that lasts up to 10 hours, a dual core Apple A5 processor and was the first iPad to feature VGA front-facing and 720p rear-facing cameras designed for FaceTime video calling. The device received mixed to positive reception from various blogs and publications. Although it was praised for its hardware improvement, such as the new Apple A5 chip, the software restriction on the iPad 2 and iOS in general drew criticism from various technology commentators.[11][12] The device sold well in its first month of sales with 2.4–2.6 million units sold and 11.12 million units were sold in the third quarter of 2011.[13][14] History[edit] Features[edit] Software[edit]

And failed to update on my iPhone 3G (too old!) The iPhone 3G is a smartphone that was designed and marketed by Apple Inc. 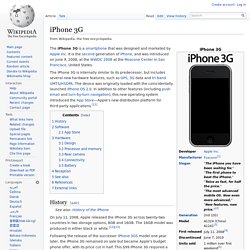 It is the second generation of iPhone, and was introduced on June 9, 2008, at the WWDC 2008 at the Moscone Center in San Francisco, United States. History[edit] On July 11, 2008, Apple released the iPhone 3G across twenty-two countries in two storage options, 8GB and 16GB. The 16GB model was produced in either black or white.[12][13] Following the release of the successor iPhone 3GS model one year later, the iPhone 3G remained on sale but became Apple's budget phone offer, with its price cut in half.

Software[edit] The iPhone 3G came preloaded with the latest version of iPhone OS, and continued to receive updates to its software for over two years, with major iterations released on an annual basis. At launch in July 2008, the iPhone 3G came preloaded with iPhone OS 2.0. In June 2010, Apple released the iOS 4.0 software update. App Store[edit] Hardware[edit] I'd looked at Pearltrees before… When I came to use it, it had changed… Pearl Tree Tutorial.

Interesting that I can't link to this blog page. I'd have liked to. – christinesinclair