Take a Stand for Whistleblower Protections: Tell Your Rep. to Defend Robert MacLean: WikiLeaks, whistleblowers and wars. San Francisco, CA - On February 24, the Washington Post ran a prominent story on a "top-secret" State Department cable that warned of Pakistani safe-havens for militants that were allegedly putting the "US strategy in Afghanistan in jeopardy". 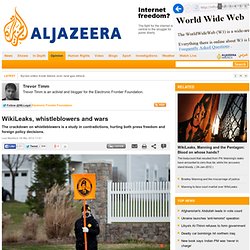 The cable was so secret, the Post reported, the US Ambassador to Afghanistan "sent it through CIA channels rather than the usual State Department ones". Yet somehow, it still ended up on the pages of one of the biggest newspapers in the United States of America. While many might have assumed this was the work of WikiLeaks and their alleged source Bradley Manning, it wasn't. "Several" US officials described the cable's contents to the Post in a seemingly coordinated effort to affect Afghanistan war policy. Will those "several officials" be investigated, arrested and aggressively prosecuted for leaking such highly sensitive information? "There just seems to be disconnect here," Tapper remarked.

Obama’s War on Whistleblowers. Many comedians consider stand-up the purest form of comedy; Doug Stanhope considers it the freest. 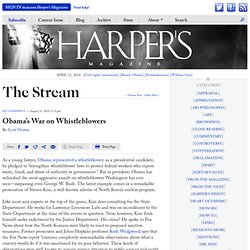 “Once you do stand-up, it spoils you for everything else,” he says. “You’re the director, performer, and producer.” Unlike most of his peers, however, Stanhope has designed his career around exploring that freedom, which means choosing a life on the road. Perhaps this is why, although he is extremely ambitious, prolific, and one of the best stand-ups performing, so many Americans haven’t heard of him. Many comedians approach the road as a means to an end: a way to develop their skills, start booking bigger venues, and, if they’re lucky, get themselves airlifted to Hollywood. Because of the present comedy boom, civilians are starting to hear about Doug Stanhope from other comedians like Ricky Gervais, Sarah Silverman, and Louis CK. Bradley Manning vs the US military - Listening Post. It has been more than 17 months since Private Bradley Manning was arrested for allegedly leaking classified US military documents to Julian Assange and his whistleblowing website WikiLeaks. 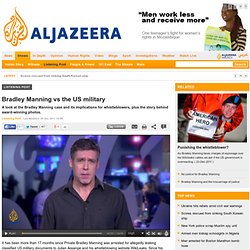 Since his detention, there has been news of torture, solitary confinement and mistreatment by prison guards. The information leaked by Manning to WikiLeaks made front page news around the world. But Manning's case and the grim conditions of his detention have not attracted as much press. In this week's News Divide, we look at the case of Bradley Manning and the implications it could have on whistleblowers in the US.

Quick hits from the media world in our Newsbytes: an update on bloggers in detention in Syria and Egypt; a controversial media law in Hungary is partially blocked by the country's constitutional court; Iranian state TV airs an alleged confession by an alleged US spy; and the media spectacle from North Korea - the masses mourn the death of Kim Jong-Il. The story behind news pictures. In Support of Imprisoned Wikileaks Whistleblower Pvt. Bradley Manning. August 8, 2010 | Like this article? 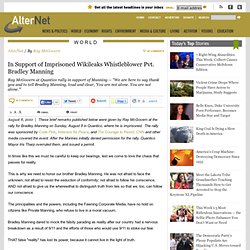 Join our email list: Stay up to date with the latest headlines via email. These brief remarks published below were given by Ray McGovern at the rally for Bradley Manning on Sunday, August 8 in Quantico, where he is imprisoned. The rally was sponsored by Code Pink, Veterans for Peace, and The Courage to Resist. In times like this we must be careful to keep our bearings, lest we come to love the chaos that passes for reality.

This is why we need to honor our brother Bradley Manning. Bradley Manning deserves a medal. After 17 months of pre-trial imprisonment, Bradley Manning, the 23-year-old US army private and accused WikiLeaks source, is finally going to see the inside of a courtroom. 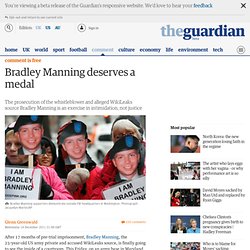 This Friday, on an army base in Maryland, the preliminary stage of his military trial will start. He is accused of leaking to the whistleblowing site hundreds of thousands of diplomatic cables, war reports, and the now infamous 2007 video showing a US Apache helicopter in Baghdad gunning down civilians and a Reuters journalist. Though it is Manning who is nominally on trial, these proceedings reveal the US government's fixation with extreme secrecy, covering up its own crimes, and intimidating future whistleblowers. Since his arrest last May in Iraq, Manning has been treated as one of America's most dastardly traitors.

The UN's special rapporteur on torture has complained that his investigation is being obstructed by the refusal of Obama officials to permit unmonitored visits with Manning. Whistle Blower Threatened with 35 Years in Prison, Warns of Developing Tyranny.