EURO/DNL. The Politics of Protectionism - Harvard Political Review. While we as a nation confront the spread of a novel coronavirus within the United States, the easiest path is to blame others and turn our backs on the rest of the world. 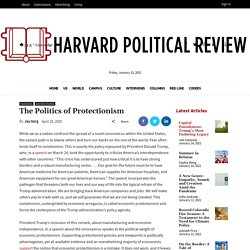 Fear often lends itself to isolationism. This is exactly the policy espoused by President Donald Trump, who, in a speech on March 24, took the opportunity to criticize America’s interdependence with other countries: “This crisis has underscored just how critical it is to have strong borders and a robust manufacturing sector. … Our goal for the future must be to have American medicine for American patients, American supplies for American hospitals, and American equipment for our great American heroes.” The speech incorporates the pathogen that threatens both our lives and our way of life into the typical refrain of the Trump administration. We are bringing back American companies and jobs. We will make others pay to trade with us, and we will guarantee that we are not being cheated. Here's what key US trading partners stand to lose from Trump's tariffs. Canada, the European Union, South Korea and Mexico stand to lose the most from Trump’s steel tariffs, although Canada and Mexico may be ruled exempt.Research from the Peterson Institute for International Economics also speculates on how US trade partners may retaliate. 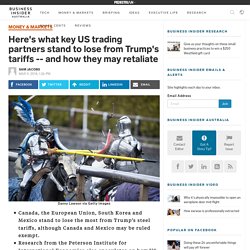 Trump’s import tariffs are here. The President confirmed this morning that the US will roll out tariffs on steel and aluminum — of 25% and 10% respectively — effective from March 23. Research from Chad Brown at the Peterson Institute for International Economics (PIIE) provides a useful summary of which countries will be most affected. Brown also speculated on how those countries may choose to retaliate, in accordance with World Trade Organisation (WTO) guidelines.

Brown based his calculations on data which showed the dollar value of US imports in 2017 — $US29 billion for steel and $US17 billion for aluminium. Charting the US-China trade battle. Daily chart - America’s trade spats are rattling markets. WHEN Donald Trump declared on March 22nd that he planned to impose a 25% tariff on $50bn a year of imports from China, the prospect of a trade war between the world’s two largest economies briefly spooked stock markets. 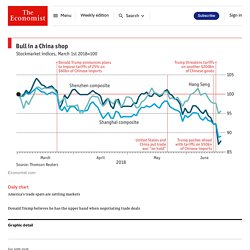 China's Shanghai composite index, which includes the shares of many companies that would be hurt by the levies, fell by 3%. In America, the S&P 500 and Dow Jones Industrial average dropped by 2.5% and 2.9% respectively. However, it did not take long for investors to get used to the threat. For nearly three months following the announcement, China's three major stock exchanges—whose collective market capitalisation exceeds $10trn—traded in a fairly narrow range. Today that looks complacent. Leaders in America and China now face a standoff that is likely to leave both sides worse off. In focus - Trade protectionism and the global outlook. A number of trade barriers have been introduced since mid-2018, the most significant of which have been higher tariffs on bilateral trade between the US and China. 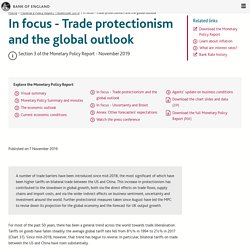 This increase in protectionism has contributed to the slowdown in global growth, both via the direct effects on trade flows, supply chains and import costs, and via the wider indirect effects on business sentiment, uncertainty and investment around the world. Further protectionist measures taken since August have led the MPC to revise down its projection for the global economy and the forecast for UK output growth. For most of the past 50 years, there has been a general trend across the world towards trade liberalisation. Tariffs on goods have fallen steadily: the average global tariff rate fell from 8½% in 1994 to 2½% in 2017 (Chart 3.1). Since mid-2018, however, that trend has begun to reverse. U.S. Collected $63 Billion in Tariffs Through June. Charting the US-China trade battle. Free trade or protectionism? – the Keynesian dilemma – Michael Roberts Blog.

The trade war that has broken out has confused mainstream macroeconomics. 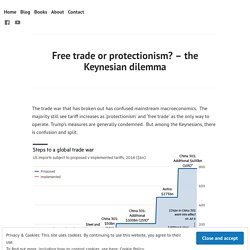 The majority still see tariff increases as ‘protectionism’ and ‘free trade’ as the only way to operate. Trump’s measures are generally condemned. But among the Keynesians, there is confusion and split. Martin Wolf, the Keynesian economic journalist, who writes for the FT, reckoned that the trade war would be costly for global capital: “Global co-operation would surely be shattered” Nevertheless, he argued for UK retaliation against Trump’s measures “more because the alternative looks weak than in the belief that it would work. Another thing the rest of the world should do is to strengthen their co-operation.” While Wolf looks for ways to ‘save globalisation and free trade’ through retaliation, another Keynesian Dani Rodrik actually advocates protectionism as a good idea for economies with weak domestic growth: “US protectionism surely will generate some beneficiaries as well in other countries.” Like this: GLOBAL TRADE RELATIONS ……………………… Trade News & Legal Commentary — FOCUS ON U.S. & GLOBAL TRADE LAW. 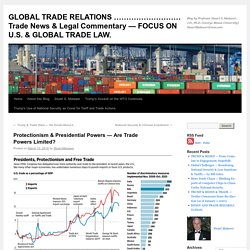 Yes, Presidential trade powers are very broad. But they are delegated powers by the Congress. They are limited by the U.S. Constitution Article 1, Section 8, Clause 3. This gives exclusive authority to the Congress to regulate global trade.