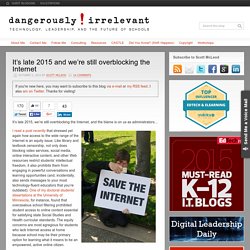 Like library and textbook censorship, not only does blocking video services, social media, online interactive content, and other Web resources restrict students’ intellectual freedom, it also prohibits them from engaging in powerful conversations and learning opportunities (and, incidentally, also sends messages to your most technology-fluent educators that you’re outdated). One of my doctoral students’ dissertations at the University of Minnesota, for instance, found that overzealous school filtering prohibited student access to online content essential for satisfying state Social Studies and Health curricular standards. There are numerous reasons why we overblock the Internet. Should Students be Allowed to use iPads at School?

Should Students be Allowed to use iPads at School? 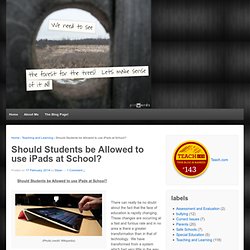 (Photo credit: Wikipedia) There can really be no doubt about the fact that the face of education is rapidly changing. About the ubermix. The ubermix is an all-free, specially built, Linux-based operating system designed from the ground up with the needs of education in mind. 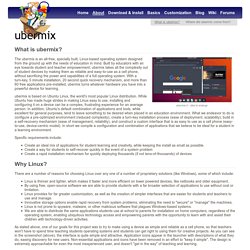 Built by educators with an eye towards student and teacher empowerment, ubermix takes all the complexity out of student devices by making them as reliable and easy-to-use as a cell phone, without sacrificing the power and capabilities of a full operating system. With a turn-key, 5 minute installation, 20 second quick recovery mechanism, and more than 60 free applications pre-installed, ubermix turns whatever hardware you have into a powerful device for learning. ubermix is based on Ubuntu Linux, the world's most popular Linux distribution. While Ubuntu has made huge strides in making Linux easy to use, installing and configuring it on a device can be a complex, frustrating experience for an average person. Specific requirements include: In the spirit of community fostered by open-source, we make ubermix available to anyone who would like to use it. The Top 10+ Sites for a Successful 1:1 Laptop Program: Experiences from the Trenches.

Greetings from Rock Valley, Iowa, the land of cows and corn! 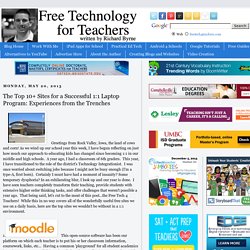 As we wind up our school year this week, I have begun reflecting on just how much our approach to educating kids has changed since becoming 1:1 in our middle and high schools. A year ago, I had a classroom of 6th graders. Main Menu - iPad Bootcamp for Teachers. Rebirth of the Teaching Machine through the Seduction of Data Analytics: This Time It's Personal. Notions of mechanized teaching machines captured the imagination of many in the late 19th and 20th century. 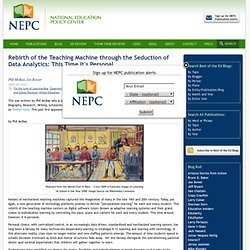 Today, yet again, a new generation of technology platforms promise to deliver “personalized learning” for each and every student. This rebirth of the teaching machine centers on digital software tutors (known as adaptive learning systems) and their grand claims to individualize learning by controlling the pace, place and content for each and every student. 10 Steps to a Successful School iPad Program. The following is a guest post by Sam Gliksman, one of SimpleK12's presenters. 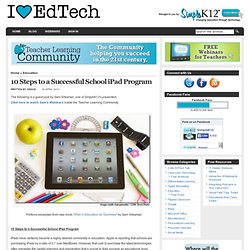 Click here to watch Sam's Webinars inside the Teacher Learning Community. Portions excerpted from new book, "iPad in Education for Dummies" by Sam Gliksman 10 Steps to a Successful School iPad Program iPads have certainly become a highly desired commodity in education. iClassroom iManagement – tips for managing an iPad classroom. So, every school now is rolling out their own BYOD and 1-to-1 programs. 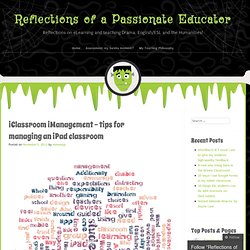 Mobile learning (mLearning) is the new black! Whether it is just a fad or not, mobile devices change the way the class runs, and they change the way students learn. Many teachers, from my experience, cite too many problems with using iPads in their classroom, most of them related to classroom management. The new Chromebook v. The iPad. Small School Big Tech: The 1:1 Challenge.

When Digital Goes Wrong: E-Textbook Experiment Hits a $2 Million Snag. Fairfax County, Virginia schools will be purchasing traditional textbooks for their students after a short trial with web-based mathematics texts hit a snag. The district chose to proceed with the web-based books for math after an abbreviated pilot program that employed the digital texts for social studies proved to be a success. However, shortly after deploying math e-textbooks, parents complained that some students lacked access to a computer outside of school — something required for the use of digital texts. Parents also raised concerns with the books necessitating the purchase of an expensive broadband internet package. In addition, students were having issues with usability of the new texts, saying they were difficult to understand and confusing. Compatibility issues also plagued the texts; sometimes they wouldn’t work with some of the most popular digital gadgets like Apple’s iPhone and iPad tablet.