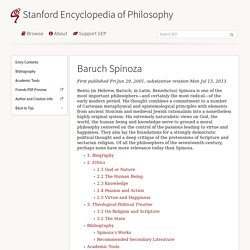 Biography Bento (in Hebrew, Baruch; in Latin, Benedictus: all three names mean "blessed") Spinoza was born in 1632 in Amsterdam. He was the middle son in a prominent family of moderate means in Amsterdam's Portuguese-Jewish community. As a boy he had undoubtedly been one of the star pupils in the congregation's Talmud Torah school. He was intellectually gifted, and this could not have gone unremarked by the congregation's rabbis. And then, on July 27, 1656, Spinoza was issued the harshest writ of herem, or excommunication, ever pronounced by the Sephardic community of Amsterdam; it was never rescinded. To all appearances, Spinoza was content finally to have an excuse for departing from the community and leaving Judaism behind; his faith and religious commitment were, by this point, gone. 2. The Ethics is an ambitious and multifaceted work. 2.1 God or Nature “On God” begins with some deceptively simple definitions of terms that would be familiar to any seventeenth century philosopher.

Spinoza: the first modern pantheist. A history of pantheism and scientific pantheism by Paul Harrison. 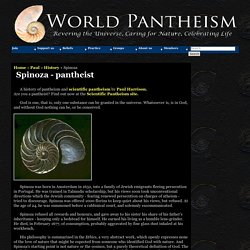 Are you a pantheist? Find out now at the Scientific Pantheism site. God is one, that is, only one substance can be granted in the universe. Whatsoever is, is in God, and without God nothing can be, or be conceived. Spinoza was born in Amsterdam in 1632, into a family of Jewish emigrants fleeing persecution in Portugal. Spinoza refused all rewards and honours, and gave away to his sister his share of his father's inheritance - keeping only a bedstead for himself. His philosophy is summarized in the Ethics, a very abstract work, which openly expresses none of the love of nature that might be expected from someone who identified God with nature. Spinoza believed that everything that exists is God. 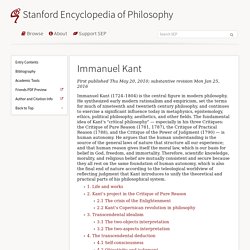 Life and works Immanuel Kant was born April 22, 1724 in Königsberg, near the southeastern shore of the Baltic Sea. Today Königsberg has been renamed Kaliningrad and is part of Russia. But during Kant's lifetime Königsberg was the capital of East Prussia, and its dominant language was German. Though geographically remote from the rest of Prussia and other German cities, Königsberg was then a major commercial center, an important military port, and a relatively cosmopolitan university town.[1] Kant was born into an artisan family of modest means.

Kant's parents were Pietist and he attended a Pietist school, the Collegium Fridericianum, from ages eight through fifteen. Kant attended college at the University of Königsberg, known as the Albertina, where his early interest in classics was quickly superseded by philosophy, which all first year students studied and which encompassed mathematics and physics as well as logic, metaphysics, ethics, and natural law. Kant, Immanuel: Metaphysics. Immanuel Kant (1724-1804) is one of the most influential philosophers in the history of Western philosophy. His contributions to metaphysics, epistemology, ethics, and aesthetics have had a profound impact on almost every philosophical movement that followed him. This article focuses on his metaphysics and epistemology in one of his most important works, The Critique of Pure Reason. 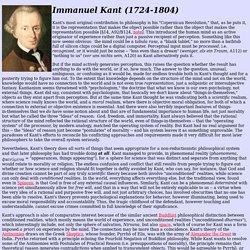 This introduced the human mind as an active originator of experience rather than just a passive recipient of perception. Something like this now seems obvious: the mind could be a tabula rasa, a "blank tablet," no more than a bathtub full of silicon chips could be a digital computer. Perceptual input must be processed, i.e. recognized, or it would just be noise -- "less even than a dream" (weniger, als ein Traum, A112) or "nothing to us" (vor uns nichts sein, A120) as Kant alternatively puts it. But if the mind actively generates perception, this raises the question whether the result has anything to do with the world, or if so, how much. The problems that must be sorted out with Kant are at the same time formidable. 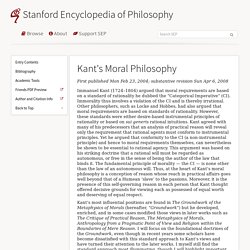 Aims and Methods of Moral Philosophy The most basic aim of moral philosophy, and so also of the Groundwork, is, in Kant's view, to “seek out” the foundational principle of a metaphysics of morals. Kant pursues this project through the first two chapters of the Groundwork. He proceeds by analyzing and elucidating commonsense ideas about morality. The point of this first project is to come up with a precise statement of the principle or principles on which all of our ordinary moral judgments are based.

Plato - Philosopher, Writer. Ancient Greek philosopher Plato founded the Academy and is the author of philosophical works of unparalleled influence in Western thought. 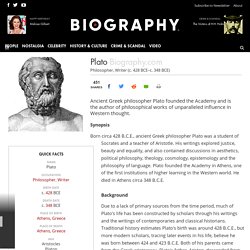 Synopsis Born circa 428 B.C.E., ancient Greek philosopher Plato was a student of Socrates and a teacher of Aristotle.