Complete relationship chart between psychological ("personality") types. Introduction to Socionics. Socionics is a theory of human interaction based on fixed patterns of information processing known as “socionic types.” 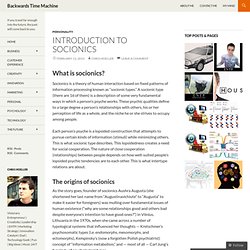 A socionic type (there are 16 of them) is a description of some very fundamental ways in which a person’s psyche works. These psychic qualities define to a large degree a person’s relationships with others, his or her perception of life as a whole, and the niche he or she strives to occupy among people.

Each person’s psyche is a lopsided construction that attempts to pursue certain kinds of information (stimuli) while minimizing others. This is what socionic type describes. This lopsidedness creates a need for social cooperation. The origins of socionics As the story goes, founder of socionics Aushra Augusta (she shortened her last name from “Augustinavichiute” to “Augusta” to make it easier for foreigners) was mulling over fundamental issues of human existence (“why are some relationships good and others bad despite everyone’s intention to have good ones?”)

Like this: Who Wants to Build a Startup with Me and Get Super Rich While Changing the World? I have the concept and the knowledge… I need a small team who want to change the world. 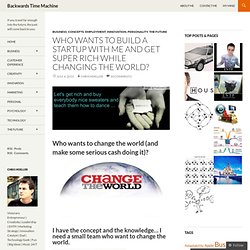 I really want to develop a new Personality Type testing system, more advanced than the standard MBTI (Myers-Briggs Type Indicator). There is so much useful information scattered about the internet, it’s just that you have to look in a million different places and put the pieces together yourself. As an ENTP, I’m super excited about this challenge and am very knowledgeable about the subject. I’ve even studied up on Socionics, which is like twice as complicated as the MBTI. I want to build the test, and then make a website, perhaps even an app that: Allows you to take a real test, and then has detailed, complete information about your type.

I need a few people that can help me out. I think if we could build an app for iOS and Android, we could perhaps even turn this whole thing into a startup company. This is the future, ladies and gentleman… But, I absolutely need a few good people to help me with this. Blog - December 2006. One of the difficulties of socionics is that one keeps encountering different "strains" of the typology. 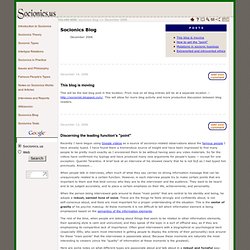 In the Russian speaking socionics world, one can get the impression that there is no consensus on how to define the types, and that everyone types as he or she pleases. This was my impression as well until I came across the celebrity benchmark project that convinced me of the existence of a socionics "mainstream," as well as the fact that I was securely in that mainstream myself, since I found I could agree with the vast majority of the types in the celebrity benchmark list. Until this moment I was not completely sure of my belonging to the "mainstream," since I had personally experienced a number of more peripheral groups and tried in vain to correct their mistakes, and had had less direct contact with mainstream socionists. 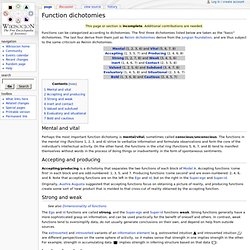 The first three dichotomies listed below are taken as the "basic" dichotomies. The last four derive from them just as Reinin dichotomies derive from the Jungian foundation, and are thus subject to the same criticism as Reinin dichotomies. Mental and vital Perhaps the most important function dichotomy is mental/vital, sometimes called conscious/unconscious. The functions in the mental ring (functions 1, 2, 3, and 4) strive to verbalize information and formulate observations and form the core of the individual's intellectual activity. Accepting and producing. Subtype. Clarifying Quadra Values. I have written elsewhere that the suggestive function can become a source of compensatory activities to temporarily take the strain off the leading function. 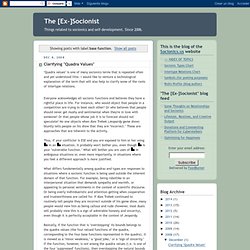 The explanation I gave is that the areas of the brain being used for a certain kind of activity associated with the leading function begin to use up their energy resources after a period of time (generally several hours), producing tiredness, apathy, or irritability. I hypothesized that a shift in focus (not just dabbling, but a real, full-fledged shift) to the suggestive function essentially turned off the neurons that had been active and activated those that were least connected to the worn-out neurons. This would create optimal conditions for the brain to recuperate and beef up its reserves in the depleted areas. Presumably, over time this exercise would enhance the "firepower" of the leading function, much like weight training strengthens the muscles. 1.

And . 2. Introverted Intuition Semantics. Interplay between Leading and Suggestive Function in Self-Realized Individuals. I have written elsewhere that the suggestive function can become a source of compensatory activities to temporarily take the strain off the leading function. 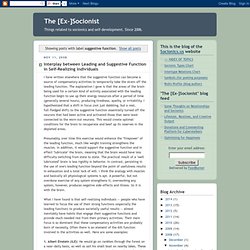 The explanation I gave is that the areas of the brain being used for a certain kind of activity associated with the leading function begin to use up their energy resources after a period of time (generally several hours), producing tiredness, apathy, or irritability. I hypothesized that a shift in focus (not just dabbling, but a real, full-fledged shift) to the suggestive function essentially turned off the neurons that had been active and activated those that were least connected to the worn-out neurons.

This would create optimal conditions for the brain to recuperate and beef up its reserves in the depleted areas. Presumably, over time this exercise would enhance the "firepower" of the leading function, much like weight training strengthens the muscles. 1. And . 2. Theory. Free Encyclopedia of Socionics. The Psyche and Reality: Augusta's Understanding. Socionic Model of the Psyche. According to socionics, all eight information elements are perceived by the psyche, but "with different degrees of differentiation and awareness" (Augusta, The Socion, or Socionics Basics). 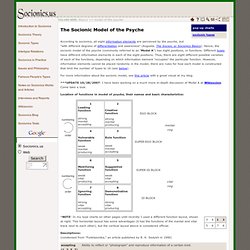 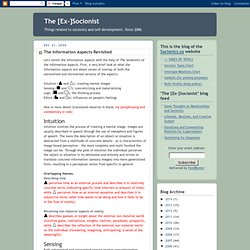 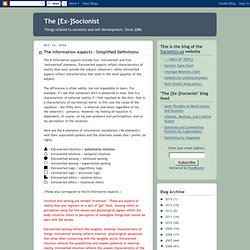 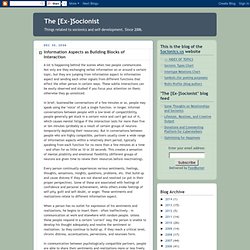 Not only are they exchanging verbal information on or around a certain topic, but they are jumping from information aspect to information aspect and sending each other signals from different functions that affect the other person in certain ways. These subtle interactions can be easily observed and studied if you focus your attention on them; otherwise they go unnoticed.

In brief, businesslike conversations of a few minutes or so, people may speak using the "voice" of just a single function. In longer, informal conversations between people with a low level of compatilibility, people generally get stuck in a certain voice and can't get out of it, which causes mental fatigue if the interaction lasts for more than five or ten minutes (probably as a result of certain groups of neurons temporarily depleting their resources). "Openness" of the Mental Functions. If you look at the mental functions (1 through 4), there is a clear tendency for each function to be more restrictive than the previous one, with the 1st function most open to new information and the 4th function most closed. The base function is open to new experience and is willing to consider pretty much any information that comes its way, even though this function forms opinions quickly and often categorically (and loves to exaggerate).

The creative function has a considerably more restrictive view of reality and doesn't want to consider "useless" information corresponding to this aspect. The role function is more restrictive yet and "tries" to operate just enough to avoid major risks to one's well-being and social reputation. Characteristics of the Creative Function. The creative (or 2nd) function is comparatively less important to the individual than the base function. How I Look for Extraverted Intuition. This topic goes back to the post on tacit knowledge in socionics. I wrote that I would try to explain the things that usually go unsaid when I am typing people. Up till now the only thing I had written on the subject was a short chart called "Overall Type Moods.

" Here is what I expect to see in people with base :(theoretical backing provided below each point in red)Relaxed, nonjudgmental, non-aggressive look and demeanor. Person is easily intrigued, starts new things very easily, and always has energy for new beginnings. Simplifying Reality Through the Weak Functions. This topic came to me while working on a translation of Augusta's The Dual Nature of Man. Augusta's type was ILE. She had a definite tendency to simplify factors affecting relationships and interaction between people. Today her theoretical understanding of socionics and intertype interaction still lies at the foundation of socionics, but they have been fleshed out and are widely recognized to be not as clear-cut as she originally described them.

Subtype. System of accepting and producing subtypes. 2 Subtype Theory. Visual Identification of Subtypes. System of DCNH Subtypes. System of DCNH SubtypesViktor Gulenko, 2006. Original text: Теория подтипов: система DCNH. Function dichotomies. Functions can be categorized according to dichotomies. Socionic Types of Famous People. ANNOUNCEMENT (12 NOV 2011): ALL TYPINGS OF FAMOUS PEOPLE HAVE BEEN PERMANENTLY MOVED TOMY PAGE AT WIKISOCION. The format there allows for much quicker updates and greater ease of productive discussion. Be sure to READ THE DISCLAIMER AT MY WIKISOCION PAGE REGARDING TYPING CONFIDENCE. More lists of famous people: Celebrity Benchmark List and Benchmark List 2007 A total of 190 famous people whose types socionists more or less agree on. Celebrity Benchmark List. Dual-type theory. Duality and Dual Relations.