9 Last Names on the Brink of Extinction - MyHeritage. Is your last name Miracle, Tumbler or Villan? 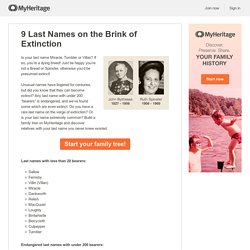 If so, you’re a dying breed! Just be happy you’re not a Bread or Spinster, otherwise you’d be presumed extinct! Unusual names have lingered for centuries, but did you know that they can become extinct? Any last name with under 200 “bearers” is endangered, and we’ve found some which are even extinct. You Won't Believe How Your Ancestors Made Money - MyHeritage. 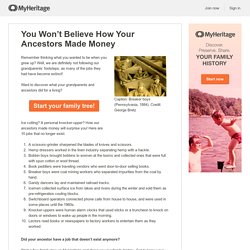 Credit: George Bretz Remember thinking what you wanted to be when you grew up? Well, we are definitely not following our grandparents’ footsteps, as many of the jobs they had have become extinct! Want to discover what your grandparents and ancestors did for a living? This Man Found Out He Was Royalty. You’ll Never Guess How! - MyHeritage. “I was thrilled to find that my 9th Great-Grandfather was in fact The Duke of Argyll!” 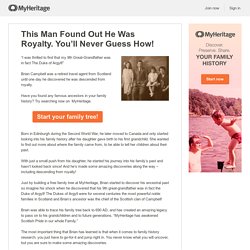 Brian Campbell was a retired travel agent from Scotland until one day he discovered he was descended from royalty. Have you found any famous ancestors in your family history? Try searching now on MyHeritage. Start your family tree! Born in Edinburgh during the Second World War, he later moved to Canada and only started looking into his family history after his daughter gave birth to his first grandchild. With just a small push from his daughter, he started his journey into his family’s past and hasn’t looked back since! Just by building a free family tree at MyHeritage, Brian started to discover his ancestral past so imagine his shock when he discovered that his 9th great-grandfather was in fact the Duke of Argyll! Brain was able to trace his family tree back to 690 AD, and has created an amazing legacy to pass on to his grandchildren and to future generations. You'll Never Guess Who Taylor Swift is Related To - MyHeritage.

We all know that Taylor Swift wanted to be a Kennedy, but just because her relationship with Connor didn’t work out, doesn’t mean she’s not part of the family! 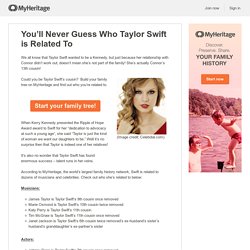 She’s actually Connor’s 13th cousin! (Image credit: Celebdial.com) Surname Database: Last Name Origins. There Are 7 Types of English Surnames — Which One Is Yours? Posted by Ancestry.com on July 1, 2014 in Surnames [Photo credit: Shutterstock] Many of us have surnames passed down to us from ancestors in England. 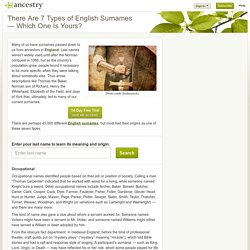 Last names weren’t widely used until after the Norman conquest in 1066, but as the country’s population grew, people found it necessary to be more specific when they were talking about somebody else. Thus arose descriptions like Thomas the Baker, Norman son of Richard, Henry the Whitehead, Elizabeth of the Field, and Joan of York that, ultimately, led to many of our current surnames. There are perhaps 45,000 different English surnames, but most had their origins as one of these seven types. Occupational Occupational names identified people based on their job or position in society.

This kind of name also gave a clue about whom a servant worked for. Describing a personal characteristic Some names, often adjectives, were based on nicknames that described a person. From an English place name From the name of an estate Signifying patronage. Explore Countries of the World. Coats of Arms (Family Crests) & Surname Histories. PA Obituary Search. Castle Garden (Before ELLIS) RootsWeb.com. FamilySearch.org. 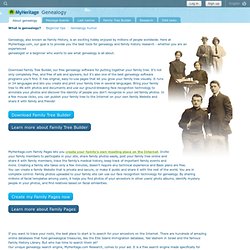 Here at MyHeritage.com, our goal is to provide you the best tools for genealogy and family history research - whether you are an experiencedgenealogist or a beginner who wants to see what genealogy is all about. Download Family Tree Builder, our free genealogy software for putting together your family tree. It's not only completely free, and free of ads and spyware, but it's also one of the best genealogy software programs you'll find. It has original, easy-to-use pages that let you grow your family tree visually. It runs in 34 languages and lets you create and print your family tree in several languages.