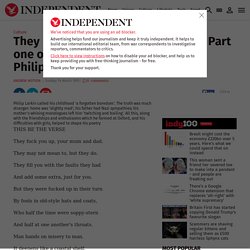 The truth was much stranger: home was 'slightly mad'; his father had Nazi sympathies; his mother's whining monologues left him 'twitching and boiling'. All this, along with the friendships and enthusiasms which he formed at Oxford, and his difficulties with girls, helped to shape his poetry They fuck you up, your mum and dad. Philip Larkin deserves his spot in Poets' Corner, says A.N. WILSON  Flawed character: Philip Larkin with a toy rabbit in 1964 when the poet was 42 He’s been pilloried as a racist and a misogynist. 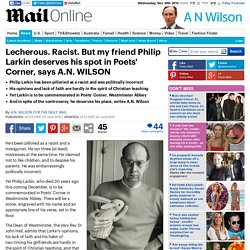 He ran three (at least) mistresses at the same time. Philip Larkin: Misogynist, racist, miserable? Or caring, playful man who lived for others? Affection for Philip Larkin's work is almost universal. 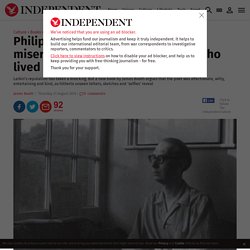 He is more frequently quoted than any other poet of his time: "Sexual intercourse began/In nineteen sixty-three"; "What will survive of us is love"; "Never such innocence again", "The sure extinction that we travel to". His poems evoke the widest range of moods, from the heart-warming celebration of The Whitsun Weddings to the bloody-minded zest of Toads; from the yearning of An Arundel Tomb to the despair of Aubade. Larkin's Predicament. By Marcus Herold University of Cologne English Department Cologne, July 15, 1996 Comments appreciated! 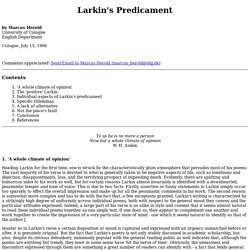 Send Email to Marcus Herold (marcus_herold@idg.de) Contents 1. Shabnumlarkinpoems1final. Philip Larkin, the Impossible Man. In May 1941, Philip Larkin was the treasurer of the Oxford University English Club and in that capacity had to take the visiting speaker George Orwell out to dinner after he had addressed the membership on the subject of “Literature and Totalitarianism.” 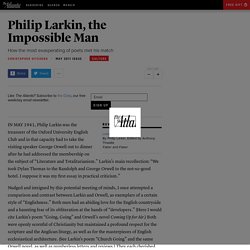 Larkin’s main recollection: “We took Dylan Thomas to the Randolph and George Orwell to the not-so-good hotel. I suppose it was my first essay in practical criticism.” Nudged and intrigued by this potential meeting of minds, I once attempted a comparison and contrast between Larkin and Orwell, as exemplars of a certain style of “Englishness.” Both men had an abiding love for the English countryside and a haunting fear of its obliteration at the hands of “developers.” Martin Amis on Larkin. Philip Larkin, the Impossible Man. Martin Amis on Larkin. Philip Larkin Bald Grouchy and Old Roddy Lumsden. Philip Larkin Man Myth Juliet Harrison. Larkin Jazz and The Whitsun Weddings Andrew Green.