A Conversation with Adam Broomberg & Oliver Chanarin. What is photojournalism? - Ed Kashi. Ed was asked recently by Whitney Johnson at the New Yorker magazine how he defined photojournalism today. 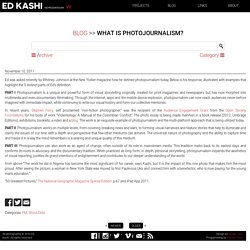 Below is his response, illustrated with examples that highlight the 3 distinct parts of Ed’s definition. PART I: Photojournalism is a unique and powerful form of visual storytelling originally created for print magazines and newspapers but has now morphed into multimedia and even documentary filmmaking. Through the internet, apps and the mobile device explosion, photojournalism can now reach audiences never before imagined with immediate impact, while continuing to write our visual history and form our collective memories. Journalists Killed in 2014. Sameh al-Aryan Al-Aqsa TV Israel and the Occupied Palestinian Territory Rami Rayan Palestine Network for Press and Media Israel and the Occupied Palestinian Territory. 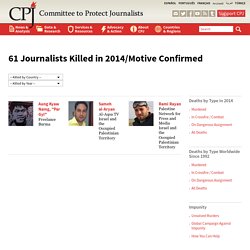 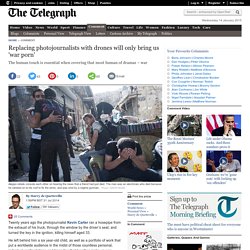 An unmanned drone has no fear, no family, and no doubts. It will fly into the most dangerous, openly hostile environment and capture the best, most incredible images that us ‘real’ reporters could ever hope for.” I have to disagree. No doubt the images themselves will be fabulous. But photojournalism is about more than just the image itself. Magazine Features. The Real Thing: Photographer Luc Delahayeby Bill Sullivan Luc Delahaye, "History," Feb. 13-Mar. 22, 2003, at Ricco-Maresca Gallery, 529 West 20th Street, New York, N.Y. 10011 "He was dead a few minutes lying in a ditch," Luc Delahaye said, indicating a 1994 photograph of a Taliban soldier stretched out on the ground. 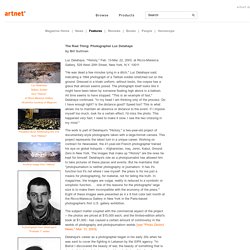 Dressed in a khaki uniform, without boots, the corpse has a grace that almost seems posed. The photograph itself looks like it might have been taken by someone floating high above in a balloon. Journalism Ethics > Online Journalism Ethics > Photojournalism. Code of Ethics. The National Press Photographers Association, a professional society that promotes the highest standards in visual journalism, acknowledges concern for every person's need both to be fully informed about public events and to be recognized as part of the world in which we live. 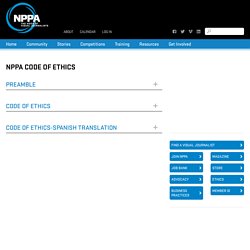 Visual journalists operate as trustees of the public. Our primary role is to report visually on the significant events and varied viewpoints in our common world. Our primary goal is the faithful and comprehensive depiction of the subject at hand. Photojournalism and Documentary Photography - Nieman Reports. Time in photography isn’t only about its passage, whether measured in hours, days or months. 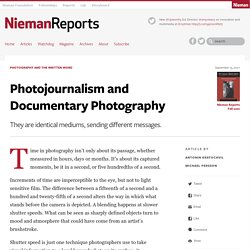 It’s about its captured moments, be it in a second, or five hundredths of a second. Increments of time are imperceptible to the eye, but not to light sensitive film. The difference between a fifteenth of a second and a hundred and twenty-fifth of a second alters the way in which what stands before the camera is depicted. A blending happens at slower shutter speeds. What can be seen as sharply defined objects turn to mood and atmosphere that could have come from an artist’s brushstroke.

Shutter speed is just one technique photographers use to take visual information to a level beyond what, on its surface, it represents. In photography, these captured moments aren’t the only vehicles in which time works to bring about feeling. Photographs by Iraqi Civilians. By now it is a truism that “The first casualty of war is truth.” 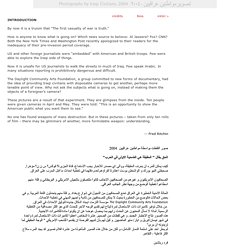 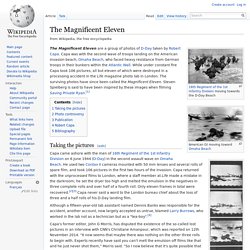 Capa was with the second wave of troops landing on the American invasion beach, Omaha Beach, who faced heavy resistance from German troops in their bunkers within the Atlantic Wall. Interview: John Morris on his friend Robert Capa. John Morris, former picture editor of Life, talks about the great photographer and his most historic roll of film – of D-Day ©Abbas/Magnum Photos. 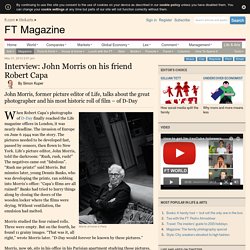 Robert Capa’s Iconic D-Day Photo of a Soldier in the Surf. Twitter, Facebook and Flickr leave photojournalism struggling. Click to play video MULTIMEDIA: The Reportage Festival brings together some of the world's finest photographers. 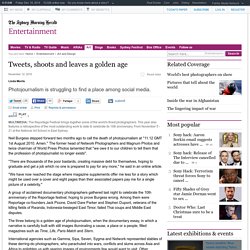 This year also features a retrospective of the most outstanding work to date to celebrate its 10th anniversary. From November 5 - 21 at the National Art School in East Sydney. Neil Burgess stepped forward two months ago to call the death of photojournalism at ''11.12 GMT 1st August 2010. Amen.'' ''There are thousands of the poor bastards, creating massive debt for themselves, hoping to graduate and get a job which no one is prepared to pay for any more,'' he said in an online article. “For God’s sake, somebody call it!” For the last thirty-odd years, I’ve been listening to people talk about, or predict the death of photojournalism. John Szarkowski, the legendary curator of photography at MOMA New York even said that photojournalism stopped being interesting after 1958; I was just out of nappies then.

Yet, somehow I’ve devoted just about all my working life to social documentary photography and nearly 25 years to photojournalism. Photojournalism Dead, Declares Former Magnum Head. Newspapers are fading. Dead or alive? The state of photojournalism. Photography has always been associated with death. The French painter Paul Delaroche is supposed to have proclaimed, “From today, painting is dead” after he saw his first daguerreotype. Whatever the provenance of that quote, miniature portrait painting was replaced by new photographic technologies, even though their long exposure times meant, as Geoffrey Batchen has written, “if one wanted to appear lifelike in a photograph, one first had to act as if dead.”

And with the rise of digital technologies in the 1980s and 1990s the discourse of photography’s death gained new life, as various commentators declared that the ease of image manipulation meant that photography’s documentary status had come to a terminal end. As a specific practice within the broad field of photography, photojournalism has had its death proclaimed on numerous occasions too. Geerst van Kesteren. For the first in a new series of interviews on photography, film and politics, Mark Durden talks to the Dutch photojournalist Geert van Kesteren about his photo books Why Mister, Why? , 2004 and Baghdad Calling, 2008.

Perspectives - FOTO8. Pictures from Ben Lowy’s Iraq | Perspectives I and II have been widely shown in recent years, both online and in exhibitions. A Look Into the Life of Conflict Photographer Benjamin Lowy. Recently, Ben Lowy's book, Iraq | Perspecitves was awarded the Duke University Center for Documentary Studies/Honickman First Book Prize by photography legend William Eggleston. Benjamin Lowy. Benjamin Lowy. War Through an iPhone Lens. Q&A with Ben Lowy. Photojournalism in the Age of New Media. 5 of the most captivating photojournalists on Instagram. Photojournalists on Instagram: a more inclusive list. Www.cepic.org/sites/cepic/assets/Photojournalist_An_Endangered_Species_In_Europe.pdf. Chicago Sun-Times Lays Off All Its Full-Time Photographers. The union representing many of the laid-off photographers plans to file a bad-faith bargaining charge with the National Labor Relations Board, a union leader said.

The Sun-Times Media company didn’t immediately comment on how many jobs were affected, but the national Newspaper Guild issued a statement saying 28 employees lost their jobs. Lytro camera tech has caught NASA's fancy: Here's what the space agency intends to do. Lytro’s $1,600 light field camera Illum may not be very popular with consumers, but NASA has already seen the potential in Lytro’s light field technology in developing high-tech cameras for future space missions. (Photo : Facebook | Lytro) New Orleans after the Flood: A Photo Gallery. Robert Polidori traveled to New Orleans four times between September 2005 and April 2006, capturing the haunting postdiluvial destruction and the still-in-place domestic lives of the city’s residents. About.

Smartphone Users Worldwide Will Total 1.75 Billion in 2014. 90% of People Have Only Taken a Photo with a Camera Phone in Their Lifetime? Sprint Commercial - Sprint iPhone 5 I am unlimited Picture Perfect commercial. What Does This Video Mean For The Future of Photojournalism? Photographer Ron Haviv's best shot. Ron Haviv-Photojournalist-Photographer. Pictures That Change History: Why the World Needs Photojournalists. At Visa pour l'Image, proof that photojournalism isn't dead.