Australia-China Trade War - Deeper Globalism. Its rapid development had brought Australia to be the country with the highest average wealth per person in 2018, overtaking Switzerland. 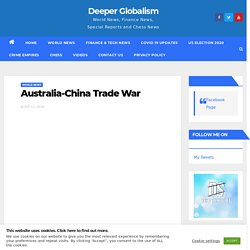 Australia’s outstanding growth has been achieved also thanks to the rise of China as an economic superpower and its need of raw materials and minerals. China, by far the world’s largest manufacturer of goods, is hungry for minerals and found Australia, a country extremely rich in natural resources such as iron, gold, uranium and many more to be a perfect business partner to satisfy China’s needs.

Economic partnership between China and Australia is not limited just to minerals. Agricultural and livestock exports from Australia also play an important role. While a large portion of these exports include cattle and sheep, exports of wheat and barley have also grown steadily over the years. Philippines pushes deals with Chinese State-owned enterprise blacklisted by the United States - Deeper Globalism.

The Philippines will push ahead with infrastructure projects backed by Chinese companies that have been blacklisted by the U.S., President Rodrigo Duterte‘s spokesperson said on Tuesday. 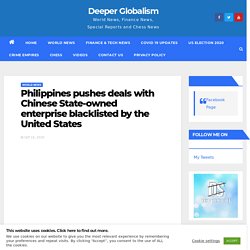 A consortium led by China Communications Construction Company, which includes CCCC Dredging Group, recently sanctioned by the United States due to their involvement in Beijing’s reclamation and militarization of disputed areas of the South China Sea, as well as MacroAsia, controlled by Philippine billionaire Lucio Tan, has been selected for the Sangley airport project in the province of Cavite, south of Manila. The estimate cost of the project is approximately $10 billion. President Duterte stated through his presidential spokesperson Harry Roque that the Philippines is an “independent” country and needs investors from China.

Therefore, the Sangley airport project would go ahead. Australia - China Tensions: The Trade War Continues - Deeper Globalism. Some regulators in Australia had already approved the deal. 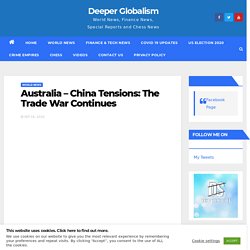 Last February, the Australian Competition and Consumer Commission stated that it had investigated the matter and would not oppose the transaction. However, a few days ago, the Australian Government has adamantly opposed to this acquisition threating not to give the necessary approvals in order to accomplish the transaction. This sudden change of mind lies in the fact that recently relationship between Australia and China totally collapsed due to the Covid pandemic. Last April, the Government of Australia called for an international investigation to determine the responsibility of China in relation to the Covid-19 pandemic.

As a result, the Chinese Government has retaliated implementing trade sanctions on few Australian agricultural and livestock products such as beef, barley, and so on. Will you board a plane which goes to... nowhere? - Deeper Globalism. We are not pulling your leg and we are not about to come up with a brand new conspiracy theory. 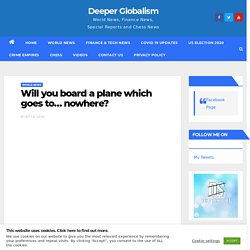 It is all real. On October 10, 2020 there will be a flight operated by Qantas to depart Sydney and come back to… Sydney. The plane will not be allowed to stop anywhere in the middle of this weird Sydney to Sydney flight. However, the 134 passengers on board of this Boeing 787 aircraft will enjoy the amazing landscapes of Australia. Ayers Rock, also known as Uluru, the scenic Great Barrier Reef, as well the beautiful Sydney Opera House are among the landmarks about to be overflew by the Qantas flight. Ironically, according to a spokesperson at Qantas, this has been the fastest selling flight in Qantas history. Cheng Lei, a small pawn in the Australia-China trade war? - Deeper Globalism. Born in August 26, 1971 in Shanghai, Cheng Lei is an Australian citizen. 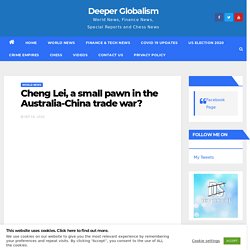 Cheng Lei migrated with her family to Melbourne, Australia, when she was 10, only to go back to China, a decade later, to commence her career as journalist and TV presenter. Last August, Cheng Lei suddenly disappeared from screens and all contact with friends and family were interrupted. Her profile and previous materials were deleted from CGTN’s website and Australian diplomats were only allowed to see her via video conference call.

Woman accused of poisoning Pres. Donald Trump arrested - Deeper Globalism. Germany about to "ban" Huawei from 5G Telecom Network? - Deeper Globalism. A few days ago the hopes of Chinese President Xi Jinping for a trade agreement with the European Union were shattered on the Berlin Wall raised by German Chancellor Angela Merkel, president on duty of the 27 European Union members, committed to achieving trade reciprocity and respect for human rights. 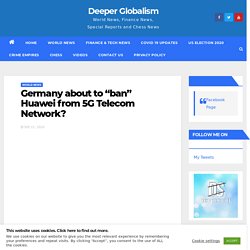 The different approach of Germany, China’s first trading partner in the Old Continent, could also involve a strategic sector for the future such as 5G. Full transcript of Xi Jinping at 75th session of the United Nations General Assembly - Deeper Globalism. Mr. 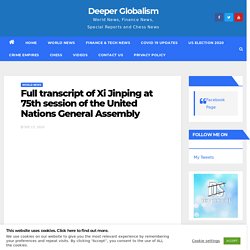 We have waged a fierce battle against the invisible enemy, the China virus, which has claimed countless lives in 188 countries. In the United States, we launched the most aggressive mobilization since the second world war, we rapidly produced a record supply of ventilators, creating a surplus that allowed us to share them with friends and partners all around the globe. We pioneered lifesaving treatments, reducing our fatality rate 85% since April.

Thanks to our efforts, three vaccines are in the final stage of clinical trials. We are mass producing them in advance so they can be delivered immediately upon arrival, we will distribute a vaccine. Ren Zhiqiang sentenced to 18 years in prison - Deeper Globalism. “I saw not an emperor standing there exhibiting his ‘new clothes,’ but a clown who stripped off his clothes and insisted on continuing being an emperor,”. 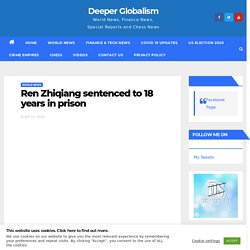 Those are the words used by Ren Zhiqiang last 23 February when the billionaire openly challenged President Xi Jinping for the way the President has handled the coronavirus pandemic, especially in the early stages when he clumsily tried to hide the true extent of the disaster in China. Zhiqiang is the son of a real estate developer close to the Communist Party and formerly part of the so-called “red nobility” that supports the same party, yet he is a voice out of the chorus that has made itself known as “the Cannon”. Last April 2020, Ren Zhiqiang went missing for few days before the announcement of the Chinese authorities which confirmed that Zhiqiang was held in custody. The last blow against President Xi Jinping cost him dearly.

First he was suspended for “anti-communist conduct” and then he was put under investigation. Gilgit Baltistan: a spark which may ignite a nuclear conflict? - Deeper Globalism. Pakistan’s federal minister on Kashmir and Gilgit Baltistan Affairs, Ali Amin Gandapur, announced in a press conference that “Government of Pakistan has decided to elevate Gilgit Baltistan to the status of a fully-fledged province with the inclusion of all constitutional rights with its rightly representation in the National Assembly and Senate”. 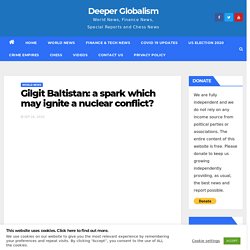 Gandapur added “Government has also announced elections for Gilgit Baltistan assembly in mid-November this year. Besides the constitutional rights and the provincial setup, important steps will also be taken for the development of the Region”. Pakistan’s Foreign Minister Shah Mehmood Qureshi in news briefing at Foreign office in Islamabad said “Furniture will be provided to all schools.

Rest houses will be set up at about 70 places to promote tourism. Armenia-Azerbaijan Conflict: Season of Risks and Military Confrontations - Deeper Globalism. In the early 1920s, the predominantly Armenian-populated Nagorno-Karabakh became an autonomous region within (the then) Soviet Republic of Azerbaijan. Decades later, as the Soviet Union started to crumble, it became apparent that Nagorno-Karabakh would come under the direct rule of the Government in Baku.

The ethnic Armenians did not accept this decision. In 1988, the Nagorno-Karabakh legislature voted to join the Armenian Republic. After the collapse of the Soviet Union in 1991, Yerevan-backed Armenian separatists seized the territory, home to a significant Azerbaijani minority, as well as seven adjacent Azerbaijani districts. According to Al Jazeera, “At least 30,000 people were killed, and hundreds of thousands were forced from their homes in the fighting”. Armenia-Azerbaijan conflict today could mean Russia-Turkey war tomorrow - Deeper Globalism. As reported yesterday on this website, that things were going badly was understood two days ago, when Turkish President Recep Tayyip Erdogan had accused Armenia of recruiting “Pkk terrorists” and preparing to attack his ally Azerbaijan. Something to say about The Philippines and Facebook - Deeper Globalism. In the Duterte’s speech, the President has simply made clear that nobody can replace the Government as a final speaker to Filipino people.

In other words, it was clear that the message from the President to Facebook was there is no highest authority in Manila that the democratically elected Government of the Philippines to implement or to communicate what we are planning to do. However, the point of this brief article is not to defend the President Duterte. He has shown during his mandate to be a smart and genuine leader and capable of defending himself much better that what we can do. In addition, we do not want to teach Facebook how to control posts, images, contents online. They have much better tools and artificial intelligence means as well as thousands of people deployed for this scope. The point of this article is to highlight how people are on sale for likes, comments or other virtual reactions. Dr. Abdullah Abdullah’s visit to Pakistan may set tone for peace - Deeper Globalism. This visit has provided an opportunity to both countries for exchanging an extensive range of views on the Afghan peace talks with Taliban, fostering the Pak-Afghan relations and improving the public interaction between both countries.

Following his arrival in Islamabad, Dr. Abdullah Abdullah met up with Pakistan’s Foreign Minister Shah Mehmood Qureshi at the Foreign Ministry. Both officials shed light on the Taliban-Afghan peace talks happening in Doha, Qatar, which, unfortunately, did not go as expected. The bilateral relations between Pakistan and Afghanistan and political solutions to the Afghan conflict also came under discussion.

Pakistan and Afghanistan’s relationship has gone through a very gnarled pathway over the years. He said, “After many troubling years, we now need to go beyond the usual stale rhetoric and shadowy conspiracy theories that have held us back. Sino-Indian Rift: from border dispute to border rejection - Deeper Globalism. In his recent press conference, Wang Wenbin said that “China does not recognize the so-called Union Territory of Ladakh illegally established by India, and opposes infrastructure construction in disputed border areas for military control purposes”.

French Environment Minister bans wild animals in circuses and marine parks - Deeper Globalism. As reported by ABC News, Barbara Pompili, France’s Minister of Ecological Transition, announced the decision of the French Government to gradually ban bears, tigers, lions, elephants and other wild animals in traveling circuses and marine parks. Say goodbye to the "King of the Skies" - Deeper Globalism. Manufacturing station number 40 is officially out of work. The conflict continues. Shot down an Armenian Su-25 by Turkish F-16? - Deeper Globalism. Nagorno-Karabakh is a conflictual region that lies between Armenia and Azerbaijan and it came under Azerbaijan’s rule after Soviet disintegration in 1991. But the massive ethnic Armenian population residing in this area completely rejected Azeri rule on them and they control this area which has made it problematic ever since. According to Al-Jazeera, at least 100 people have been killed. Among them both civilian and military men from Armenia were included whereas Azerbaijan does not release any data from its side.