Anatomy For Sculptors - anatomy. Making hollow casts in open or ‘closed’ moulds – Part 1. This post follows directly from the last one in which I featured one of the simplest ways of making a complete mould for a puppet head .. making a 2-piece block mould in silicone rubber.

At the end of the post I included a couple of photos of a hollow casting using filled polyurethane resin and now I want to explain how to do this in more detail. I will also deal in later posts with making hollow casts using other materials such as Jesmonite and the advantages of being able to make a hollow cast in a ‘closed’ mould .. i.e. without having to set up a pouring hole at the mouldmaking stage. Jumping forward for the moment above and below, the hollow resin cast is almost finished and just needs a little cleaning up on the seam line. Polyurethane resin normally cures a white-to-beige colour dependent on the type and this cast is light grey because I added a filler called Fillite when mixing it. The oceans are full of our plastic – here's what we can do about it. By 2050, 95% of seabirds will have plastic in their gut. 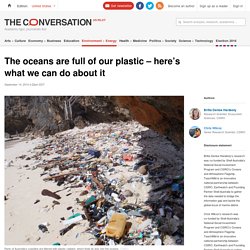 That is just one finding from our national marine debris research project, the largest sample of marine debris data ever collected anywhere in the world. The statistic is just one prediction of what’s in store if we don’t come to grips with the growing problem of rubbish at sea. The issue of marine debris was recently brought to the world’s attention by the search for missing Malaysian Airlines flight MH370, which was reportedly hampered by objects that look similar to aircraft remains. When you consider that six million tonnes of fishing gear is lost in the oceans each year, yet derelict fishing gear doesn’t even crack the top ten most common items found during coastal clean-ups, you begin to grasp the scale of the problem. Plastic not so fantastic. Project Vortex - Home. Hand-Dyed Plastic Bag Yarn Tutorial - Alpaca Direct Blog. Reusing & recycling may seem like a hot topic, but when I find a creative (often crafty!) 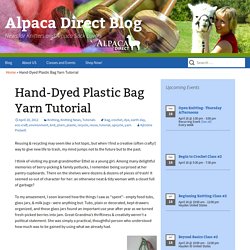 Way to give new life to trash, my mind jumps not to the future but to the past. FLTV10021 Interactive Art Media 1 - 2015. Study 1 Week 3/Class 3 15% Create an Interactive Media program integrating audio and vision. 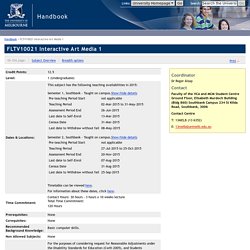 Edward_ winkleman: Advice for Artists Seeking Gallery Representation. Studio. Sustainable Luxury. How can we grow the world we want? 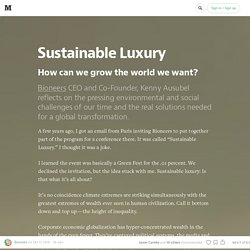 Bioneers CEO and Co-Founder, Kenny Ausubel reflects on the pressing environmental and social challenges of our time and the real solutions needed for a global transformation. Mixographics: Katharina Fritsch: A Sense of the Uncanny. Katharina Fritsch is a contemporary German artist famous for her large-scale polyester sculptures. 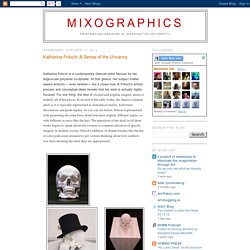 At first glance, her subject matter seems eclectic— even random— but a closer look at Fritsch's artistic process and conceptual ideas reveals that her work is actually highly focused. For one thing, the idea of clichéd and popular imagery seems to underly all of her pieces. In several of her early works, she depicts a human skull as it is typically represented in anatomical studies, halloween decorations and punk regalia. Grants & Funding Data for Visual arts. Environmental education. Call for Expressions of Interest The 2015 round of the Environmental Education grants program opened to Expressions of Interest on 2 March 2015 and closes 10 April 2015. 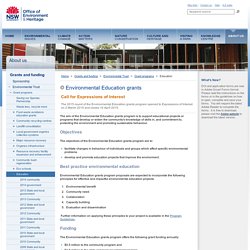 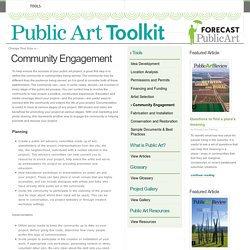 The community may be different than the audience being served, so it is good to consider both of these stakeholders. Fraction - ARTS - STRUCTURE WORKSHOP. CombustusSeeing the Extraordinary In the Ordinary: Khalil Chishtee's plastic bag sculptures - Combustus. Your Success My Failure. 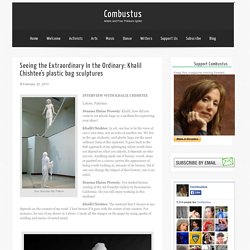 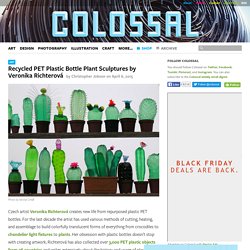 Everyone knows it’s important to recycle, but it’s often hard to realize the consequences of forgetting about one little bottle; maybe we should consider not buying this stuff in the first place. (I drink out of the tap all the time, heck, I’d drink out of the hose.) Without getting on a soapbox, the following artists have made powerful statements about the ways in which we waste…. by re-using materials that would otherwise be thrown away, and removing paper and plastics completely from the recycling loop…. as even the act of recycling uses massive amounts of energy.

Aurora Robson. Eveline Kolijn. SCIENCE & TECHNOLOGY. Killer Whales and Marine Pollutants. PCBs are a family of compounds that were widely used as insulating oils in electrical transformers and capacitors, and also as ingredients in adhesives and caulking compounds. Although known to be dangerous to humans for a long time, PCBs were used in the US from the 1920’s until they were banned in 1977. During this time, many PCB manufacturing plants nationwide carelessly dumped PCBs into nearby marine waters, and attempts to dispose of it by burning sent it into the atmosphere, dispersing it worldwide. Urban bays in Seattle, Tacoma and Bremerton, WA have some of the highest levels of PCBs on the west coast. Elliot Bay, Sinclair Inlet and Commencement Bay are particular PCBs hotspots. Plastic bags creations. I use all sorts of plastic bags to make carpets, bags, cushions, toys….. ++ More information at Just plastic bags website ! Idea sent by Mazaudier Brigitte !

Tags: Bag, Creative, Plastic Co-founder of Recyclart. Working hard to bring you creative recycled ideas! Follow us ! Featured Author! Author Compensation Program. CombustusSeeing the Extraordinary In the Ordinary: Khalil Chishtee's plastic bag sculptures - Combustus. Fashion From Trash. It may not be obvious, but the 3Rs of the ‘Waste Hierarchy‘ are in a particular order for a reason. ‘Reduce’ comes first, since it has zero impact. Following closely, ‘Re-use’ cuts waste and engenders no or little energy use. ‘Recycle’ comes next because it requires more energy (yet still less than to manufacture using new resources). Sarah Turner - Eco Art & Design. How to Make Anthropologie Flowers – DIY. Fun with Fused Plastic. By Becky Striepe on November 8, 2010. Dyeing Polyester with Disperse Dye.

Make your own bioplastic. Trash Into Treasure: 6 Cool Things Made From Sea Plastic, by Liz Pleasant. Photo courtesy of Studio Swine's "Sea Chair". Dishfunctional Designs: Upcycled Plastic Bottles & Bags: Unique & Beautiful Art. Who would have thought a plastic bag or a plastic water or soda bottle could be upcycled into something so unique and beautiful? How To Recycle HDPE Plastic (High Density Polyethylene) - a simple method. Precious Plastic open-source recycling machines.