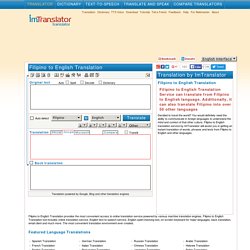 Additionally, it can also translate Filipino into over 50 other languages. Top 5 reasons to travel to Pulau Weh - Dive Weh. Relax, unwind, chat with the locals, swim in the ocean blue, are so many wonderful reasons to visit Pulau Weh. 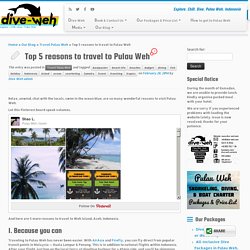 Let this Pinterest board speak volumes. Shao L.Pulau Weh, havenFollow On. Pulau Weh island guide. Indonesia off the beaten track - Travel blogTravel blog. If you like island life, tropical water, diving/snorkeling but don’t want to spend too much money and want to see more of Indonesian then just Bali, Pulau Weh is a good option. 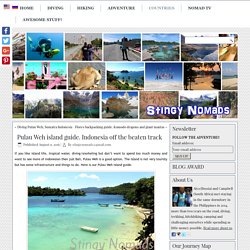 The island is not very touristy but has some infrastructure and things to do. Here is our Pulau Weh island guide. Pulau Weh island guide. Indonesia off the beaten track - Travel blogTravel blog. Hongkongclauses's Travel Blog: Banda Aceh, Indonesia - December 31, 2006. We arrived in Medan and headed for a pre-arranged rendevouz with a local travel agent who had secured all of our Sumatra air tickets and was nice enough to wait around at the office on the holiday. 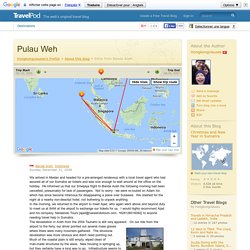 He informed us that our Sriwijaya flight to Banda Aceh the following morning had been cancelled, presumably for lack of passengers. Not to worry - we were re-routed on Adam Air, which has since become infamous for disappearing a plane over Sulawesi. We crashed for the night at a nearby non-descript hotel, not bothering to unpack anything.

Early symptoms and warning signs of carpal tunnel syndrome. Best Places to Retire Abroad: The Philippines. If you are considering retiring in another country, I am no doubt biased, but I believe it’s hard to beat the Philippines. 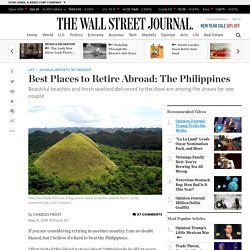 I first visited this island nation (about 7,000 islands in all) 24 years ago when I was 52 years old. At that time I was a college professor doing research, and friends introduced me to a lovely young lady who over time became my wife. I am now 76 and retired, and my wife and I plan on spending much of the rest of our lives in the Philippines. The benefits are numerous: a warm climate year round (average low temperatures are in the mid-70s); endless beaches and water activities; easy access to destinations across Asia; excellent medical care; a relatively low cost of living; and abundant opportunities to help those less fortunate. 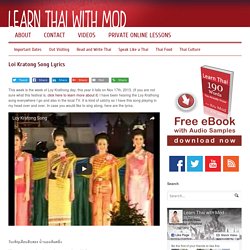 (If you are not sure what this festival is, click here to learn more about it) I have been hearing the Loy Krathong song everywhere I go and also in the local TV. It is kind of catchy so I have this song playing in my head over and over. In case you would like to sing along, here are the lyrics. วันเพ็ญเดือนสิบสอง น้ำนองเต็มตลิ่ง Wan-pen duean sìp-sŏng , náam nong dtem dtà-lìng. Loy Krathong.  Accessible Thailand. Useful Thai Phrases We have compiled a few useful phrases to help you during your stay in Thailand and to get you speaking like a local: Visitors to Thailand are commonly referred to as “Farang”. 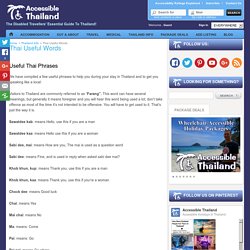 This word can have several meanings, but generally it means foreigner and you will hear this word being used a lot; don’t take offence as most of the time it’s not intended to be offensive. Loi Krathong Song Lyrics – A Woman Learning Thai…and some men too ;) The Loi Krathong song in Thai… My Thai teacher just loves to sing. 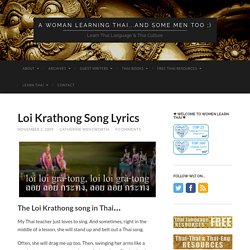 And sometimes, right in the middle of a lesson, she will stand up and belt out a Thai song. Often, she will drag me up too. Then, swinging her arms like a conductor, we prance around my sofa. In unison. Loi Krathong Song Lyrics – A Woman Learning Thai…and some men too ;) Loy Krathong Song (Thai Version) Learn to Speak, Read, and of course SING! in Thai. Singing in Thai helps one internalize the language and learn the culture, and it motivates further language learning. 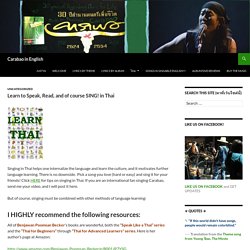 There is no downside. Pick a song you love (hard or easy) and sing it for your friends! Click HERE for tips on singing in Thai. A blog about foreigner bringing up his family in Bangkok: Learning Thai with Namewee's "Thai Love Song" and me! Click here for Part 2 of my Thai Lesson using Namewee's "Thai Sad Song". 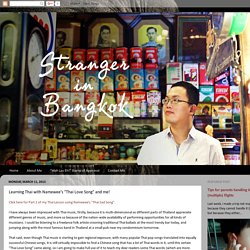 I have always been impressed with Thai music, firstly, because it is multi-dimensional as different parts of Thailand appreciate different genres of music, and more so because of the nation-wide availability of performing opportunities for all kinds of musicians. I could be listening to a freelance folk artiste crooning traditional Thai ballads at the most trendy bar today, and jumping along with the most famous band in Thailand at a small pub near my condominium tomorrow.

I will leave my admiration for Namewee (the song's singer/composer) for another day, but he has really out-done himself again with this production. The Farang Thai Song (aka The 5552)! – A Woman Learning Thai…and some men too ;) The Farang Thai Song (aka The 5552)! … Back in March there was that really cute YouTube video by Maggie Rosenberg, I Don’t Speak Thai But I Try. And now we have the pleasure of … [drum roll] … The Farang Thai Song, by Shimona Kee. Learning Thai from Songs. This site is designed for beginning readers of Thai who already know all of the Thai alphabet and writing system, and know some basic Thai. You can practice reading from the seven songs. Each song has pop-up glossary help and an audio pronunciation guide, by word and by verse. Each song is also accompanied by culture notes, grammar notes and an explanation. Also, you will have a chance to sing along or read along, with the accompanying sung vocals and pictures which are provided to help your understanding.