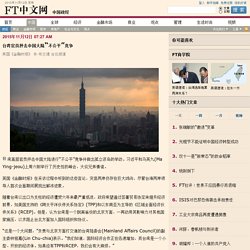 What's behind the China-Taiwan divide? Image copyright Associated Press China sees Taiwan as a break-away province that will eventually be part of the country again, but many Taiwanese want a separate nation. 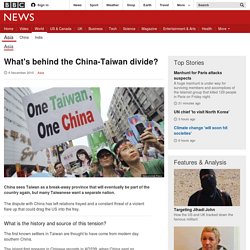 The dispute with China has left relations frayed and a constant threat of a violent flare up that could drag the US into the fray. What is the history and source of this tension? The first known settlers in Taiwan are thought to have come from modern day southern China. The island first appears in Chinese records in AD239, when China sent an expeditionary force to explore - a fact Beijing uses to back its territorial claim. After a brief spell as a Dutch colony (1642-1661) Taiwan was unquestionably administered by China's Qing dynasty from 1683 to 1895. Starting at the beginning of the 17th Century, significant numbers of migrants started arriving from China, often fleeing turmoil or hardship. In 1895, following Japan's victory in the First Sino-Japanese War, the Qing government had no choice but to cede Taiwan to Japan. Historic Xi-Ma Summit Advances China's Long Game for Taiwan. 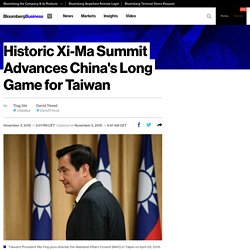 It’s been seven decades since top leaders from both sides, technically still in a state of war, have met in a formal diplomatic encounter. The planned meeting in Singapore on Saturday -- two years in the making -- is the latest remarkable twist in a geopolitical contest that stretches back to the bloody, final days of the Chinese Civil War, when Chiang Kai-shek’s Kuomintang, or KMT, fled and took residence in Taiwan in 1949 -- or, in China’s view, launched a renegade province. Ma on Thursday billed the gathering as a way to promote peace across the Taiwan Strait and maintain the "status quo. " Turns out, the status quo isn’t a bad thing for Xi right now. China hasn’t yet realized its dream of political reunification with Taiwan, but its economic gravitational pull has increased steadily during Ma’s eight years in office. Summit With Chinese Leader Spotlights Unmet Expectations in Taiwan.

Presidents from Taiwan and China moved to cement goodwill at a first-ever meeting Saturday. 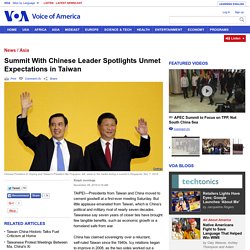 But little applause emanated from Taiwan, which is China’s political and military rival of nearly seven decades. Taiwanese say seven years of closer ties have brought few tangible benefits, such as economic growth or a homeland safe from war. China has claimed sovereignty over a reluctant, self-ruled Taiwan since the 1940s. Icy relations began to improve in 2008, as the two sides worked out a series of agreements bridging the two economies. Today in Taiwan, where the economy shrank in the third quarter of this year, people wonder where the benefits are. Liu Yi-jiun, a public affairs professor at Fo Guang University in Taiwan, said Taiwanese wanted progress Saturday when the two presidents met for the first time, after two years of planning.

“We had a high expectation, because in the past 66 years, these two highest leaders never met. He said the amount of money is extremely low. China and Taiwan: Trade has made them 'frenemies' - Nov. 5, 2015. The latest sign of change will come Saturday, when leaders of the long-time enemies are due to meet for the first time since 1949, when China's civil war ended and the then-ruling party, which lost, fled to Taiwan. 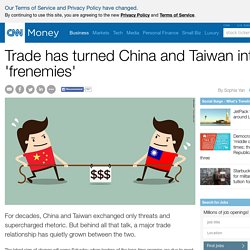 Since then, Taiwan has asserted itself as an independent democracy. But China insists the island is a renegade province. It's one complicated relationship, but in a nutshell, they're "frenemies. " Despite protests from hardliners, China is Taiwan's top trade partner, accounting for about 40% of exports or roughly $130 billion a year, according to the Taiwanese government. Trade has ballooned from about $8 billion in 1991.

Tourism on the island has also boomed since more direct flights began operating between China and Taiwan in 2009. Meanwhile, Taiwan has provided China with plenty of investment dollars, funneling nearly $11 billion in 2012 into key sectors, including technology. This close relationship means the health of both economies are intertwined. 財團法人台灣智庫 Taiwan Thinktank.