Neoclassicism: An Introduction. The English Neoclassical movement, predicated upon and derived from both classical and contemporary French models, (see Boileau's L'Art Poetique (1674) and Pope's "Essay on Criticism" (1711) as critical statements of Neoclassical principles) embodied a group of attitudes toward art and human existence — ideals of order, logic, restraint, accuracy, "correctness," "restraint," decorum, and so on, which would enable the practitioners of various arts to imitate or reproduce the structures and themes of Greek or Roman originals. 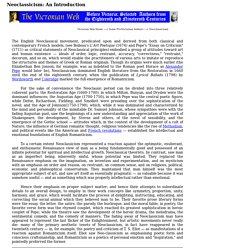 Restoration (England) Facts, information, pictures. The English Restoration - May 25, 1660. Also on this day Lead Story On this day in 1977, Memorial Day weekend opens with an intergalactic bang as the first of George Lucas’ blockbuster Star Wars movies hits American theaters. 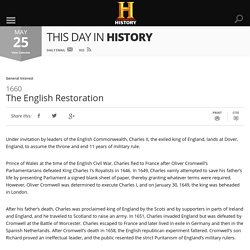 The incredible success of Star Wars–it received seven Oscars, and earned $461 million in U.S. ticket sales and a gross of close to $800 million... American Revolution With George Washington presiding, the Constitutional Convention formally convenes on this day in 1787. Automotive On this day in 1994, the ashes of 71-year-old George Swanson are buried (according to Swanson’s request) in the driver’s seat of his 1984 white Corvette in Hempfield County, Pennsylvania. Civil War. Restoration Literature. In a Nutshell The Restoration is a period in literary history full of humor and hanky-panky. 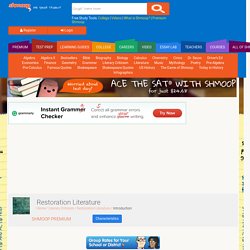 Shocking, right? We thought dudes that looked like this would be super-uptight. But nope—the most popular writers of the age wrote bawdy comedies packed with sexual innuendo. These writers loved to satirize social manners, sexual codes, and the social classes of their day. What set the literature of this period going was—history time! What's more, the theaters—which had been closed for more than a decade by those uptight Puritans who were in power before Charles II was restored to the throne—were reopened during this time. Restoration.

Restoration Literature Top 10 List. (1) Comedy of Manners This is a comic play usually centered around romantic or juicy sexual intrigue. 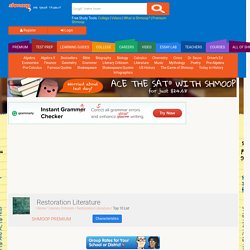 This was the most popular theatrical genre during the Restoration period. Restoration audiences loved their laughs, and writers of the period dished out jokes a-plenty in those plays. (2) Satire Making fun of someone, or something, in a way that exposes their flaws. . (3) Heroic Couplet Two rhyming lines written in iambic pentameter (with ten syllables in each line, and alternating stress on the syllables) . (4) Social Life Holy gossip, Batman: social life is a big theme in Restoration literature. . (5) Politics. Restoration Poetry Analysis. The period from 1660 to 1798, sometimes extended to 1832, known as the long eighteenth century, is the age of satire. 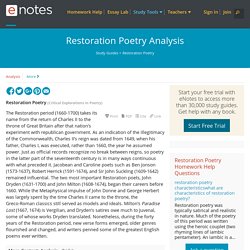 The genre traces its roots at least as far back as the fifth century b.c.e. comic playwright Aristophanes, although the models for Restoration writers are primarily the Augustan Horace and the early second century c.e. Juvenal. Learn English, IELTS, EFL,ESL Public Speaking, Grammar, Literature, Linguistics by NEO. After the Restoration in 1660, when Charles II came to the throne, there was a complete repudiation of the Puritan ideals and way of living. 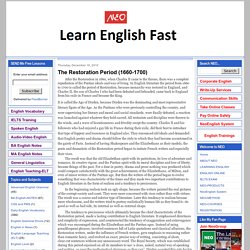 In English literature the period from 1660 to 1700 is called the period of Restoration, because monarchy was restored in , and Charles II, the son of Charles I who had been defeated and beheaded, came back to from his exile in and became the King. It is called the Age of Dryden, because Dryden was the dominating and most representative literary figure of the Age.

As the Puritans who were previously controlling the country, and were supervising her literary and moral and social standards, were finally defeated, a reaction was launched against whatever they held sacred. All restraints and discipline were thrown to the winds, and a wave of licentiousness and frivolity swept the country. Charles II and his followers who had enjoyed a gay life in during their exile, did their best to introduce that type of foppery and looseness in also. Restoration: Introduction. Restoration, in English history, the reestablishment of the monarchy on the accession (1660) of Charles II after the collapse of the Commonwealth (see under commonwealth) and the Protectorate. 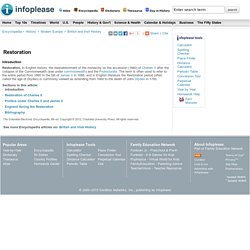 The term is often used to refer to the entire period from 1660 to the fall of James II in 1688, and in English literature the Restoration period (often called the age of Dryden) is commonly viewed as extending from 1660 to the death of John Dryden in 1700. The Columbia Electronic Encyclopedia, 6th ed. Copyright © 2012, Columbia University Press. All rights reserved. See more Encyclopedia articles on: British and Irish History. Restoration Literature. The Restoration Period in English Literature: Timeline & Overview. This lesson will explore what is known as the Restoration era of English literature, which lasted from 1660 to about 1688. 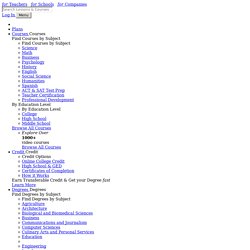 We'll look at the context, themes, and styles that define this period of literature. Explore our library of over 10,000 lessons Click "next lesson" whenever you finish a lesson and quiz. Got It You now have full access to our lessons and courses. You're 25% of the way through this course! The first step is always the hardest!