New Page 1. The True Story of Matilda Sweetfuck - FIC: Inside Spaces (QAF US, NC-17) I've been working on this one for a while, finally got it done. 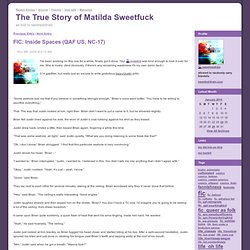 Yay! Mojokid was kind enough to look it over for me. She is lovely. (And obviously, if there's any remaining wackiness it's my own damn fault.) 314 gapfiller, but really just an excuse to write gratuitous toppy! “Some asshole told me that if you believe in something strongly enough,” Brian’s voice went softer, “You have to be willing to sacrifice everything.” That. Sunshine in LA, a queer as folk fanfic. Warnings: Brief power struggle, oral sex, marking, present tense, top! 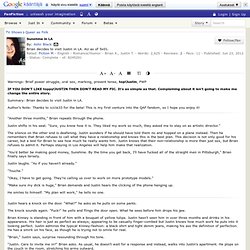 Justin, PWP. Everyone needs a little boost sometimes by hide_the_soap. "What's with the hat? 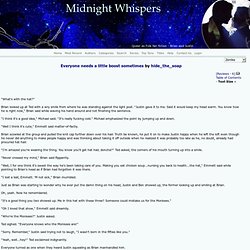 " Brian looked up at Ted with a wry smile from where he was standing against the light post. "Justin gave it to me. Said it would keep my head warm. You know how he is right now," Brian said while waving his hand around and not finishing the sentence. Walk In My Shoes - Part 2 by Wildsweet_angel. Justin's twenty-first birthday was fast approaching. 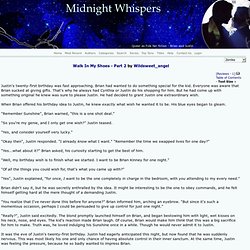 Brian had wanted to do something special for the kid. Everyone was aware that Brian sucked at giving gifts. In Sickness by museme87. Warnings: strong language, sexual situations, toppy! 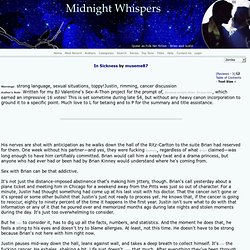 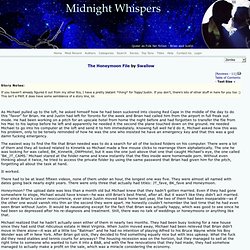 He and Justin had left for Toronto for the week and Brian had called him from the airport in full freak out mode. He had been working on a pitch for an upscale hotel from home the night before and had forgotten to transfer the file from his Mac to his laptop before he left and apparently he needed it the second the plane touched down on the ground. He needed Michael to go into his computer at the loft and send it to him immediately. Knowing full well he’d do it, Michael asked how this was his problem, only to be tersely reminded of how he was the one who insisted he have an emergency key and that this was a god damn fucking emergency. The easiest way to find the file that Brian needed was to do a search for all of the locked folders on his computer. It worked.

Honeymoon? Then he did something stupid. Leather Bound by elyxer. Summary: A 24 year old Justin meets a 36 year old Brian for the first time and introduces him to a whole new world. 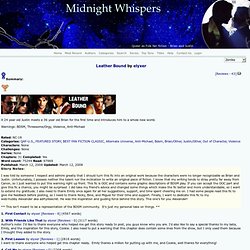 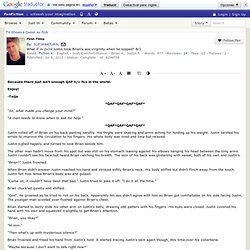 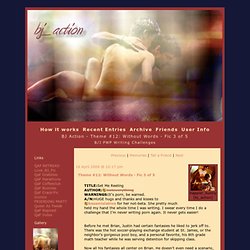 She pretty much held my hand the whole time I was writing. The fairy paid a visit. TITLE: Booty Call AUTHOR: frantic_questWARNINGS: None A/N: Sometime in late S4 Justin gets a visit by the happy homo fairy. 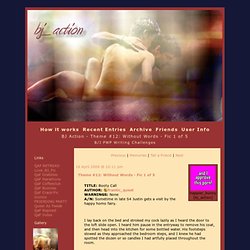 I lay back on the bed and stroked my cock lazily as I heard the door to the loft slide open. I heard him pause in the entryway to remove his coat, and then head into the kitchen for some bottled water. His footsteps slowed as they approached the bedroom steps, and I knew he had spotted the dozen or so candles I had artfully placed throughout the room. Spin and Fall. Foreverbm is responsible for this awesome banner. Her patience and grace in the face of impossible requests is truly remarkable. You could've asked. TITLE: Want AUTHOR: notreallyme10A/N: Thanks to my lovely beta _alicesprings "Jesus Christ Brian, enough already! " I put my hands on either side of his head and try to fuck his face. I can't help it, I have to come. The best thing about Jusitn. Title: The Best Thing about Justin Author: Xie Beta'd by the darling testdog65 -- THANK YOU! Timeline: S4 The best thing about Justin was the way he smelled when I was drunk and we were dancing.

I felt my heart hammering while his teeth nipped at my throat, and wondered if that's what my doctor meant when he said I could do a little light cardio. Just music and lights, noise and the crowd, Justin's thigh hard and rough against my cock. I kissed some E into his mouth, and after a little while the light got brighter and the music better, and Justin's skin felt hotter when I stroked it. Maybe it was the E, but kissing Justin on that dance floor felt like flying. We were home later, his face buried between my legs, my cock sliding past his lips into his throat, my fingers tugging at his hair. The sheets were smooth, almost slippery under my feet. I pressed down with my heels, hard, and lifted my hips off the bed. I resisted for a second.