The Holy Church of Brian and Justin. Church | Hymns | Psalms | Testify This site is not intended for those under 18 years of age. 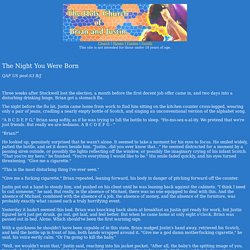 The Night You Were Born QAF US post-S3 B/J Three weeks after Stockwell lost the election, a month before the first decent job offer came in, and two days into a disturbing drinking binge, Brian got a stomach flu. The night before the flu hit, Justin came home from work to find him sitting on the kitchen counter cross-legged, wearing only a pair of jeans, cradling a nearly empty bottle of Scotch, and singing an unconventional version of the alphabet song. "A B C D E F G," Brian sang softly, as if he was trying to lull the bottle to sleep. Queer As Folk Brian/Justin "Mine" - (2 Parts) - Fanfiction - Sneeze Fetish Forum. Justin went to bed early and woke up in the middle of the night with a weird feeling that something was amiss. 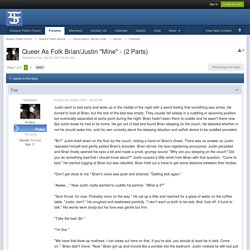 He turned to look at Brian, but the rest of the bed was empty. They usually fell asleep in a cuddling or spooning position but eventually separated at some point during the night. Brian hadn't been there to cuddle and he wasn't there now. But Justin knew he had to be home. A Rei of Writing - The Kinney Cure (PG-13; Brian/Justin)

Title: The Kinney CureAuthor: EthareiFandom: Queer as Folk (US)Characters: Brian/Justin, Debbie Novotny, Vic GrassiTimeline: mid-S1Rating: hard PG-13Summary: Justin is sick, and thinks that Brian wouldn't want to go near him.Disclaimer: Queer as Folk and all the characters and situations featured therein are the property of Showtime, Cowlip Productions and their affiliates. 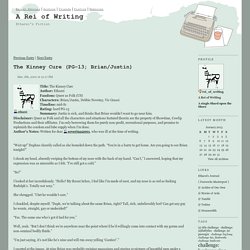 I’m only borrowing them for purely non-profit, recreational purposes, and promise to replenish the condom and lube supply when I’m done.Author's Notes: Written for dear severina2001, who was ill at the time of writing. “Wait up!” Daphne cheerily called as she bounded down the path. “You’re in a hurry to get home. I shook my head, absently swiping the bottom of my nose with the back of my hand. “So?” I looked at her incredulously. She shrugged. I chuckled, despite myself. Man's Ruin by Silverfish. Summary: Brian and Justin meet when Brian is having to undergo chemotherapy for cancer in the very same hospital in Pittsburgh that Justin Taylor works. 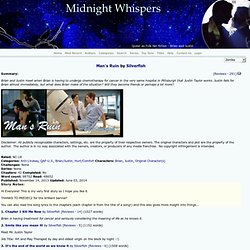 Justin falls for Brian almost immediately, but what does Brian make of the situation? Will they become friends or perhaps a lot more? Disclaimer: All publicly recognizable characters, settings, etc. are the property of their respective owners. Anomolistic by GaleandRandy. Anomalistic Justin coughed and coughed and coughed, his chest rattling and his eyes tearing up from lack of oxygen. 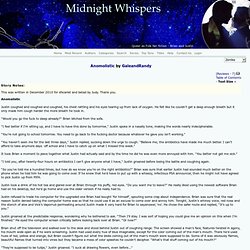 He felt like he couldn't get a deep enough breath but it only made him cough harder the more breath he took in. "Would you go the fuck to sleep already? " Brian bitched from the sofa. "I feel better if I'm sitting up, and I have to have this done by tomorrow," Justin spoke in a nasally tone, making the words nearly indecipherable. "You're not going to school tomorrow. "You haven't seen me for the last three days," Justin replied, sucking down the urge to cough. Fucking Allergies! Quitter.

The reason no one else is this way. Forever Young, a queer as folk fanfic. I have recently discovered the wonderful show of QAF and my little plot bunnies are being formed :) Please review! 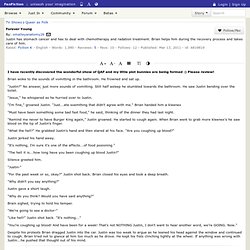 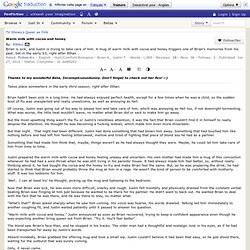 Don't forget to check out her fics! :-) Takes place somewhere in the early third season, right after Ethan. Brian hadn't been sick in a long time. He had always enjoyed perfect health, except for a few times when he was a child, so the sudden bout of flu was unexpected and really unwelcome, as well as annoying as hell. A Spoonful of Sugar - popfly - Queer as Folk (US. Justin rarely got sick. 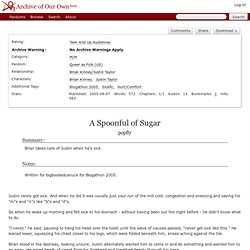 And when he did it was usually just your run of the mill cold: congestion and sneezing and saying his "m"s and "n"s like "b"s and "d"s. So when he woke up morning and felt sick to his stomach - without having been out the night before - he didn't know what to do. "I never," he said, pausing to hang his head over the toilet until the wave of nausea passed, "never get sick like this. " He leaned lower, squeezing his chest closer to his legs, which were folded beneath him, knees aching against the tile. Brian stood in the doorway, looking unsure. He stayed like that for an hour, willing his stomach to stop roiling and churning, clenching his teeth and pressing the back of his hand against his mouth. True love.