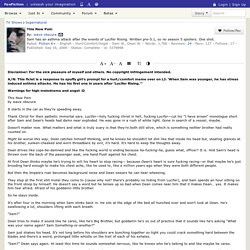 No copyright infringement intended. The Air Up There, a supernatural fanfic. The black car tore up the freeway. 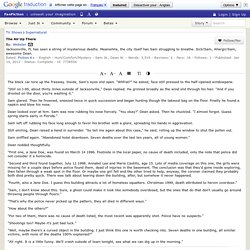 Inside, Sam's eyes slid open. "Whfrat? " he asked, face still pressed to the half-opened windowpane. "Still on I-95, about thirty miles outside of Jacksonville," Dean replied. He grinned broadly as the wind slid through his hair. Sam glared. Dean looked over at him. Sam left off rubbing his face long enough to favor his brother with a glare, spreading his hands in aggravation. Still smiling, Dean raised a hand in surrender. Sam sniffled again. Dean nodded thoughtfully. "First one, a Jane Doe, was found on March 14 1996. "Second and third found together, July 12 1998. "Fourth, also a Jane Doe. Without Penalties, a supernatural fanfic. It Starts With T, a supernatural fanfic. They're pretty sure it's a werewolf they're hunting, but after a solid week of searching, they've given up on finding any decent clues, other than the fact that it always appears in Colonial Park shortly after moonrise. 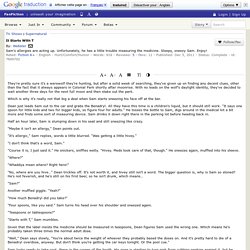 With no leads on the wolf's daylight identity, they've decided to wait another three days for the next full moon and then stake out the park. Which is why it's really not that big a deal when Sam starts sneezing his face off at the bar. Dean just leads Sam out to the car and grabs the Benadryl. All they have this time is a children's liquid, but it should still work.

"It says one spoon for little kids and two for bigger kids, so figure four for adults. " Half an hour later, Sam is slumping down in his seat and still sneezing like crazy. Something Like That, a supernatural fanfic. Summary: Season 8 – Sick Sam / Big Brother Dean – Outsider POV – Dean frowned suspiciously at the grocery store cashier before glancing at the plastic bags now loaded with his must-haves these days – the juice and the soup and the meds...and everything else. 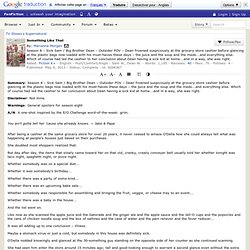 Which of course had led the cashier to her conclusion about Dean having a sick kid at home...and in a way, she was right. Disclaimer: Not mine Warnings: General spoilers for season eight A/N: A one-shot inspired by the E/O Challenge word-of-the-week: grim. You ain't gotta tell her 'cause she already knows. ~ Jake & Papa After being a cashier at the same grocery store for over 20 years, it never ceased to amaze O'Della how she could always tell what was happening at people's houses just based on their purchases.

She doubted most shoppers realized that. But day after day, the items that slowly came toward her on that old, cranky, crawly conveyer belt usually told her whether tonight was taco night, spaghetti night, or pizza night. Mr. Hiding in Plain Sight Chapter 1, a supernatural fanfic. Hiding in Plain Sight Disclaimer: I only wish I owned them. 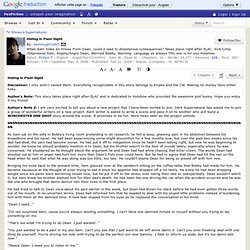 Everything recognizable in this story belongs to Kripke and the CW. Making no money here either folks. Author's Note: This story takes place right after ELAC and is dedicated to Hotshow who provided the awesome plot bunny. Fighting to Breathe Chapter 1, a supernatural fanfic. Fighting to Breathe. 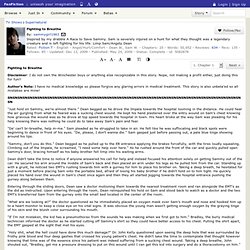 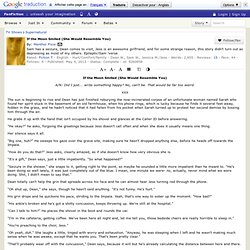 No, can't be. That would be far too weird. The sun is beginning to rise and Dean has just finished reburying the now-incinerated corpse of an unfortunate woman named Sarah who found her spirit stuck in the basement of an old farmhouse, when his phone rings, which is lucky because he finds it several feet away, hidden in the grass, and he hadn't noticed that it had fallen from his pocket when Sarah turned up to protest her second demise by tossing him through the air. 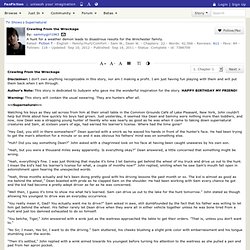 I am just having fun playing with them and will put them back when I am through. Author's Note: This story is dedicated to Judyann who gave me the wonderful inspiration for the story. HAPPY BIRTHDAY MY FRIEND! Warning: This story will contain the usual swearing. ~~Supernatural~~ Watching his boys as they sat across from him at their small table in the Common Grounds Café of Lake Pleasant, New York, John couldn't help but think about how quickly his boys had grown. Sammy's back!, a supernatural fanfic. Doctors are Dicks Chapter 1, a supernatural fanfic. Disclaimer:I own no part of Supernatural or its characters. 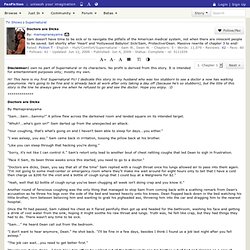 No profit is derived from this story. It is intended for entertainment purposes only; mostly my own.