Hook or Me This Time! Chapter 1: Little Bird, a criminal minds fanfic. So this is really all based on a dream I had a few nights ago; that and the new music station I created on Pandora based on the Inception movie score. 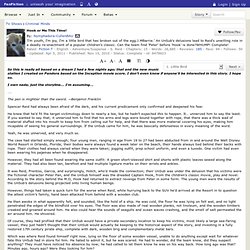 I don't even know if anyone'll be interested in this story. I hope so. I own nada; just the storyline... I'm assuming... The pen is mightier than the sword. Spencer Reid had always been afraid of the dark, and his current predicament only confirmed and deepened his fear. He knew that he'd fit the target victimology down to nearly a tee, but he hadn't expected this to happen. Yeah, he was unnerved, and very much so. The case had started simply enough; four young men, ranging in age from 19 to 27 had been abducted from in and around the Walt Disney World Resort in Orlando, Florida; their bodies were always found a week later on the beach, their hands always tied behind their backs with rope. However, they had all been found wearing the same outfit: A green short-sleeved shirt and shorts with plastic leaves sewed along the material. I Will Not Break Chapter 1, a criminal minds fanfic. Ok, here's a new idea I've had.

Reid and the team are kidnapped and Reid must act tough for the unsub and Reid has to deal with dilauded problems too no slash of any and mention of the last time Reid went through withdrawl. Story is lon when it really doesn't have to be at all – chelseabarron

Hope you guys like the little teaser I'm putting up. 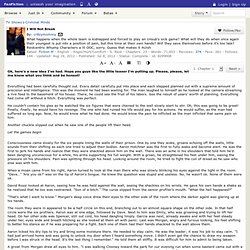 Please, please, let me know what you think and be honest! Everything had been carefully thought out. Every detail carefully put into place and each stepped planned out with a supreme amount of precision and intelligence. This was the moment he had been waiting for. He couldn't contain his glee as he watched the six figures that were chained to the wall slowly start to stir. Another chuckle slipped out when he saw one of the people lift their head. Let the games begin Consciousness came slowly for the six people lining the walls of their prison. Little Boy Lost Chapter 1, a criminal minds fanfic. Little Boy Lost By Eligent Summary: The team is called out to find a serial kidnapper and murderer who targets young boys. 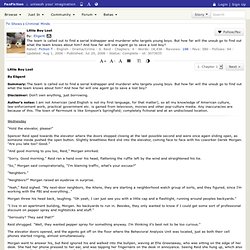 But how far will the unsub go to find out what the team knows about him? And how far will one agent go to save a lost boy? Disclaimer: Don't own anything, just borrowing. Author's notes: I am not American (and English is not my first language, for that matter), so all my knowledge of American culture, law-enforcement work, practical government etc. is gained from television, movies and other pop-culture media. Tribulations Chapter 15, a criminal minds fanfic. By hatochiisai Disclaimer: I do not own "Criminal Minds" or any of the characters of the show. 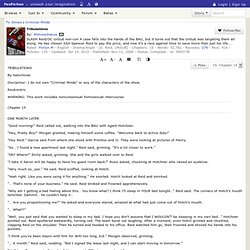 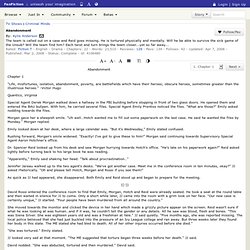 Out of Reach Chapter 1, a criminal minds fanfic. Summary: Reid is kidnapped… again.

Amazingly good Reid Whump on the rape and get over it to so embarasing for the team as they saw everything. – chelseabarron

Can the team find him in time? 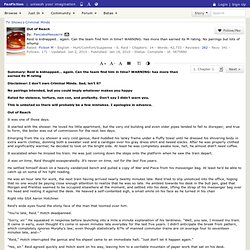 WARNING: has more than earned its M rating. Taken Chapter 1, a criminal minds fanfic. "Here are his clothes and some toys and books. 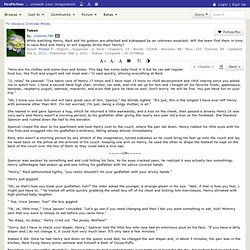 This bag has some baby food in it but he can eat regular food too, like fruit and yogurt and oat meal and—"JJ said quickly, shoving everything at Reid. "JJ, relax" he yawned. "I've taken care of Henry 17 times and I have read 13 texts on child development and child rearing since you asked me to watch him. I have a second hand high chair, stroller, car seat, and crib set up for him and I bought all his favorite foods; applesauce, bananas, raspberry yogurt, oatmeal, macaroni, and even that juice he likes so well. Don't worry. Found Chapter 1, a criminal minds fanfic. The occupants of the ambulance were greeted by a few doctors and nurses and the tearful but smiling faces of JJ, Will, and Garcia. 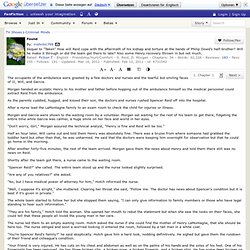 Morgan handed an ecstatic Henry to his mother and father before hopping out of the ambulance himself so the medical personnel could extract Reid from the ambulance. As the parents cuddled, hugged, and kissed their son, the doctors and nurses rushed Spencer Reid off into the hospital. After a nurse lead the LaMontagne family to an exam room to check the child for injuries or illness. Morgan and Garcia were shown to the waiting room by a volunteer. Morgan sat waiting for the rest of his team to get there, fidgeting the entire time while Garcia was calmer, a huge smile on her face and world in her eyes.

Beutifully written I kninda really hate Reilly for hurting my Reid and then the twist of him being raped by him thene sequel bbing not done is kinda killing me. – chelseabarron

Escape Chapter 1: And So It Begins, a criminal minds fanfic. Chapter 1 Rain came down in sheets, darkening the city and making it look like it was nine at night instead of nine in the morning.

Only people who had actual rain coats or umbrellas dared to poke their heads outside and the only sounds to be heard were tires splashing through puddles and raindrops hitting the road and sidewalks. 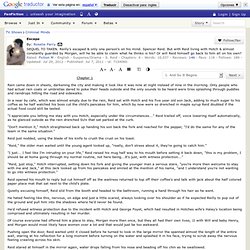 In a near by cafe, which was almost empty due to the rain, Reid sat with Hotch and his five year old son Jack, adding to much sugar to his coffee as he half watched his boss cut the child's pancakes for him, which by now were so drenched in maple syrup Reid doubted if the actual food could still be tasted. "I appreciate you letting me stay with you Hotch, especially under the circumstances... " Reid trailed off, voice lowering itself automatically, as he glanced outside as the rain drenched SUV that sat parked at the curb. Buried Chapter 1, a criminal minds fanfic. Buried by JadeScholar Not sure why I'm doing this.

Reid is buried alive and thnen as it turn out raped and also thinks he is the second man not that he himself has been raped. There wil be a second part just have to wait for it. – chelseabarron

I haven't written fanfiction since the Lord of the Rings fandom was at the height of popularity, and certainly nothing like this. 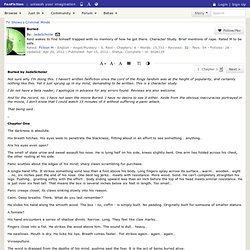 Yet it just sprung up in my mind, demanding to be written. This is a character study. I do not have a beta reader; I apologize in advance for any errors found. A Gossamer Cage Chapter 1: Prologue Ghosts, a criminal minds fanfic. A Gossamer Cage By Spense Okay, we're going to try this again, mainly because of all the private emails I've gotten.

Ok so Reid is held kidnapped for a year it long journey back he isn't hurt just that it is a long story he does get stokholme syndrome though and the story is forever long but good. PS he is not hurt and gideon comes back to track reid down cause the team cant but its a forever story – chelseabarron

Thanks for all the love. "I knew you'd be the one to find this. You must be frightened. Read and reread, the letter from Jason Gideon on his precipitous exit from the BAU, addressed to one Dr. Reid gazed at it sightlessly. The one time he had talked about it (to Prentiss of all people) she was gentle, and had made sense. "You only remember that your father left. Tribulations Chapter 15, a criminal minds fanfic.