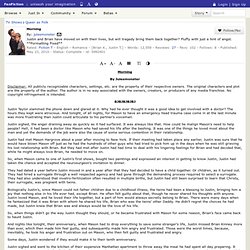 The original characters and plot are the property of the author. The author is in no way associated with the owners, creators, or producers of any media franchise. No copyright infringement is intended. Justin Taylor slammed the phone down and glared at it. Justin sighed, the anger draining away as quickly as it had surfaced. Justin had met Mason Hargrove about a year after moving to New York. So, when Mason came to one of Justin's first shows, bought two paintings and expressed an interest in getting to know Justin, Justin had taken the chance and accepted the neurosurgeon's invitation to dinner.

They had dated a year before Justin moved in and a year after that they had decided to have a child together. So, when things didn't go the way Justin thought they should, or he became frustrated with Mason for some reason, Brian's face came back to haunt Justin. 'Queer As Folk' Cast: Where Are They Now? Kiss Me, I'm Irish!, a queer as folk fanfic. Disclaimer: QAF and its characters are the sole property of Cowlip Productions and Showtime; no copyright infringement is intended.

Brian and Justin during the St. Partick holiday. – chelseabarron 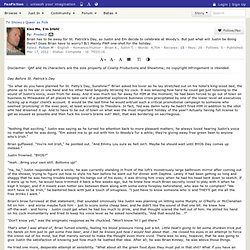 Patrick's Day "So what do you have planned for St. Patty's Day, Sunshine? " Brian asked his lover as he lay stretched out on his hotel's king-sized bed, the phone up to his ear in one hand and his other hand languidly stroking his cock. "Nothing that exciting," Justin was saying as he turned his attention back to more pleasant matters; he always loved hearing Justin's voice no matter what he was doing. Brian guffawed. Justin frowned. "Yeah...Bring your own still. "Ha, ha," Justin responded with a smile; he was currently standing in front of the loft's monstrously large bathroom mirror after coming out of the shower, trying to figure out how to style his hair before he went out for dinner with Daphne.

"Don't know yet," was the enigmatic response as he chuckled. He tried one more, desperate attempt at sensibility. "Well, you know best, Dr. GALE HAROLD IN VIDEO CLIP SOME LOVIN OF QAF. 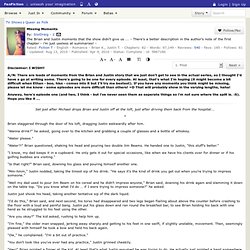 A/N: There are loads of moments from the Brian and Justin story that we just don't get to see in the actual series, so I thought I'd have a go at writing some. There's going to be one for every episode. At least, that's what I'm hoping (it might become a bit difficult when Ethan - boo, hiss - comes into it but I'll try me bestest). If you have any moments you think might be missing, please let me know - some episodes are more difficult than others! =D That will probably show in the varying lengths, haha! Anyway, here's episode one (and two, I think - but i've never seen them as seperate things so i'm not sure where the split is. Set just after Michael drops Brian and Justin off at the loft, just after driving them back from the hospital... Brian staggered through the door of his loft, dragging Justin awkwardly after him. 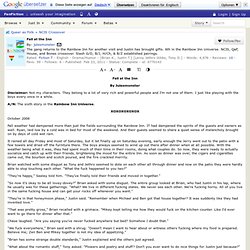 They belong to a lot of very rich and powerful people and I'm not one of them. I just like playing with the boys every once in a while. A/N: The sixth story in the Rainbow Inn Universe. October 2006 Fall weather had dampened more than just the fields surrounding the Rainbow Inn. It rained all day Friday and most of Saturday, but it let finally up on Saturday evening, early enough the Jerry went out to the patio with a few towels and dried off the furniture there. Brian watched with some disgust as Tony and Jethro seemed to dote on each other all through dinner and now on the patio they were hardly able to stop touching each other.