Bad Santa... White Collar H/C Advent Prompt: hybridshade on September 7th, 2013 03:11 am (local) Not-so nice Santa Just as Peter and Neal are heading home for the holiday, Neal is suddenly kidnapped by a couple of guys in Santa suits.

They look ridiculous but they mean business, and they make sure the FBI knows Neal is at their mercy until they get what they want. 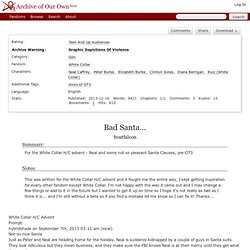 Naturally, everyone at the office is happy to postpone their vacation plans until Neal is back safe. OT3 or pre-OT3 preferred. Notes: The wrist cuffs in the story are similar to these: Frostfalcon Started on 11/11/2013 finished 12/16/2013. Dasvidaniya Chapter 1, a white collar fanfic. Dasvidaniya A/N: This is a story that wouldn't leave me alone.

Neal can get out of any situation Peter puts him in, but a new case may change that. Undercover in a notorious Russian outfit, the unthinkable happens in front of Peter's eyes. There's no way Neal is coming back from this. Neal El and Peter are taken by the russians and Neal is alive it is not a deathfic – chelseabarron 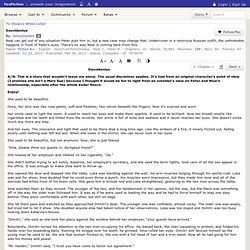 It's told from an original character's point of view (I promise she isn't a Mary Sue) because I thought it would be fun to right from an outsider's view on Peter and Neal's relationship, especially after the whole Keller fiasco. Enjoy! She used to be beautiful. Once, her skin was like rose petals, soft and flawless, like velvet beneath the fingers. Her smile used to light the room. And her eyes. She used to be beautiful, but not anymore. "Inna, please show our guests in, dorogaya moya? " She looked at her employer and inhaled on her cigarette, "Da.

" She didn't bother trying to act sultry. She opened the door and stepped into the lobby. Inna watched them as they moved. She let them pass and watched as they approached Dimitri's desk. "Dimitri," she said as she took her place against the window behind her employer, "your guests have arrived. " "Mr. The younger man nodded, "Of course. A Hopeless Passage Chapter 1, a white collar fanfic. AUTHOR'S NOTE: This story is a mainstream version of another fic I have recently begun to post on fan fic dot net. 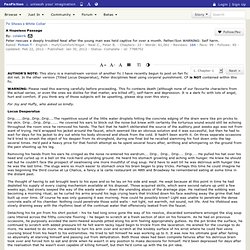 In the other version (Titled Locus Desperatus), Peter disciplines Neal using corporal punishment. A Study of Reality. Title: A Study of RealityRating: PG-13Characters: Neal, Peter, Mozzie, Diana, Jones, ElizabethWarnings: DarkSummary: Neal has a feeling he's being watched, and it only escalates from there. 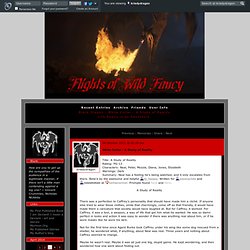 Beta'd by the awesome and helpful tj_teejay. A Confidence Sans Bound. Title: A Confidence Sans BoundRating : PG-13Characters/Pairings: Neal, Peter genSpoilers: What Happens in Burma...Warnings/Triggers/Enticements: Allusions to tortureWord Count: ~6300Summary: Neal is languishing in a prison in Myanmar and Peter comes to rescue him On AO3 A/N: This is a fill for the "Running Hot" fever meme being hosted by the lovely and talented ariadnes_string over on her LJ. 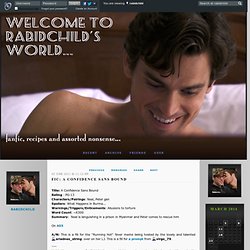 This is a fill for a prompt from virgo_79. ----Light. Vacuum Chapter 1, a white collar fanfic. (Chapter 1) Neal lay slumped against the column in the Bureau parking garage, his pale blue eyes staring glassily ahead.

There was a reddish yellowish glow reflected off his eyes and face as he lay there still, unmoving as if made of the very stone he leaned against. 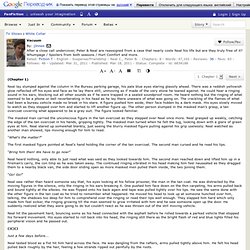 He cursed silently to himself, brow furrowed with worry, body tense. 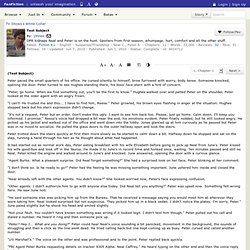 Someone knocked, opening the door. Peter turned to see Hughes standing there, his boss' face stern with a hint of concern. "Peter, go home. The Maze Chapter 9: Epilogue, a white collar fanfic. Tanner was lounging comfortably in June's living room, Mozzie sitting next to him.

Neal and Peter are kidnapped the fic is pretty amazing and a great whump machine for the maze I tip my hat. – chelseabarron

They had both received news about Neal and Peter being recovered and taken to the hospital. 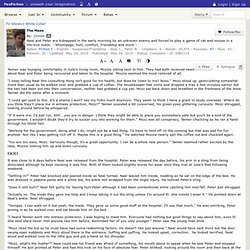 Mozzie seemed the most relieved of all. "I keep telling Neal this consulting thing isn't good for his health, but does he listen to me? Nooo. " Mozz stood up, gesticulating somewhat more than usual as he walked over and grabbed a cup of coffee. Symbiotic Chapter 1, a white collar fanfic. (Chapter 1) Neal was listening in to the feed as Peter spoke over the wire.

He had been allowed to tag along but it was a dangerous assignment and they didn't want him in the way. 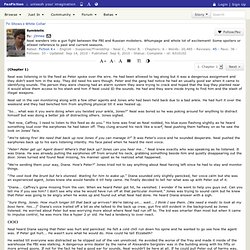 They did need his ears though. Peter and the gang had notice he had an usually good ear when it came to identifying sounds. The person they were chasing had an alarm system they were trying to crack and hoped that the bug they planted near it would allow them access to his stash and him if Neal could ID the sounds. Life is hard Chapter 1, a white collar fanfic. A/N: English is not my native language.

Special Thanks to my great betareader sandgnat10. 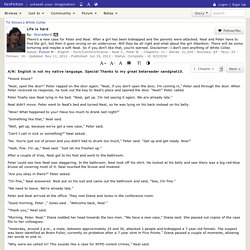 *Knock Knock* "Neal, open the door! " Peter rapped on the door again. "Neal, if you don't open the door, I'm coming in," Peter said through the door. Corrupt Chapter 1, a white collar fanfic. (Chapter 1) Neal felt the impact as he hit the concrete, the base of his skull thudding against the hard surface.

Peter and Neal are going to be possed and there is some minor whump its a very slow and long story very long! – chelseabarron

He was stunned, eyes rolling back as he tried to keep conscious. There was a vague sense that someone was nearby, the sound of something that would normally make him freeze echoing off the walls of the empty warehouse. Flotsam Chapter 1, a white collar fanfic. He was shivering but he didn't know why, an odd sensation of sitting in water making him finally open up his eyes and glance around.

Neal and Peter are kidnapped and put in the middle of a lake and are dealling with hypothermia they are rescued after a long ordeal. – chelseabarron

He was slumped in the passenger seat of a vehicle, the windows taped shut around the edges. His eyes went down slightly to see that the window and door levers were missing as were the pop up part of the lock which was filled in with something he could only describe as a clear and thick resin. All of this seemed a bit odd to him despite the fuzziness of his brain. He shifted his weight and found his arms handcuffed behind him through the head support, a soft clinking of metal when he moved to try and free himself. Now he was really confused, quickly unlocking the cuffs without any problems with help from a hidden pick in one cufflink.

Where the heck... am I? Worth it? Chapter 1, a white collar fanfic. Summary: While trying to retrieve stolen paintings from a ruthless art theif, Neal is taken hostage. Peter races to find his partner, but this time, it might be up to Neal to save himself. Rating: T to be safe. Mild whumping, some language. Disclaimer: I (unfortunately) do not own White Collar or any of the characters, except for the ones I created. This is just for fun, no copyright infringement intended. Neal Caffrey winced as another blow struck him in the torso. "If I tell you, then you'll kill me, so what purpose does that serve? " You Never Hear the Shot That Takes You Down Chapter 1, a white collar fanfic. Disclaimer: I don't own White Collar, Neal, or any of the other characters (sadly). This takes place right at the end of Point Blank, switching up the last five minutes of it. Came up with the idea before the premier, though most of it was written after.

Bloodwork Chapter 1, a white collar fanfic. (Chapter 1) He pulled at his bonds but was too weak to move, a low groan escaping his lips.

They had tied a strap of rubber around his mouth, gagging him as he lay on the long plank of wood. He had seen it from above before they had tied him there. Inner Sanctum Chapter 1, a white collar fanfic.

It is self inflected wounds of Neal caffery after he is kidnapped and brought for the testing of a new cell inthe hopes of testing its escapibilty in reality it is torture for the sake of Haiskin the warden its short and not much in detail. – chelseabarron