We Meet Again, a Criminal Minds + White Collar Crossover fanfic. On the plane to NY. 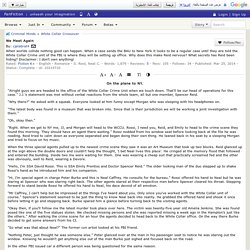 "Alright guys we are headed to the office of the White Collar Crime Unit when we touch down. That'll be our head of operations for this case. " J.J.'s statement was met without verbal reactions from the whole team, all but one member, Spencer Reid. "Why there? " "The latest body was found in a museum that was broken into. "Oh, okay then. " "Right. Creepy, a Criminal Minds + White Collar Crossover fanfic. L.J. 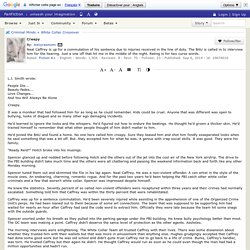 Smith wrote: People Die...Beauty Fades...Love Changes...And You Will Always Be Alone Creepy. It was a moniker that had followed him for as long as he could remember. Kids could be cruel. He'd learned to ignore the looks and the whispers. He'd joined the BAU and found a home. Color of the Business, a Criminal Minds + White Collar Crossover fanfic. A/N: I wasn't sure where to put this, as there's only mention of the CM characters, but as it's a sequel to a crossover, I decided to stick it in the crossover section. 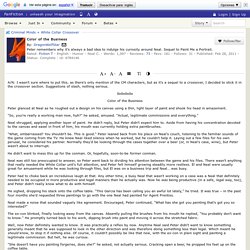 Suggestions of slash, nothing serious. 0o0o0o0o Color of the Business. Paint Me a Portrait, a Criminal Minds + White Collar Crossover fanfic. A/N: Slashy suggestions, but no actual slash here. 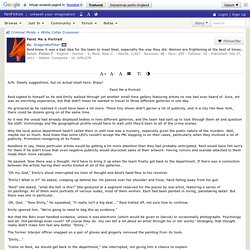 Enjoy! Paint Me a Portrait Reid sighed to himself as he and Emily walked through yet another small-time gallery featuring artists no one had ever heard of. Sure, art was an enriching experience, but that didn't mean he wanted to travel to three different galleries in one day. Busted, a Criminal Minds + White Collar Crossover fanfic. Neal let a small smirk cross his face as his phone beeped, knowing that it was his lovers response. 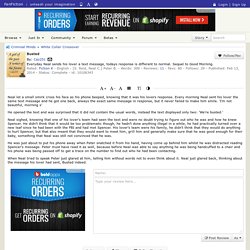 Every morning Neal sent his lover the same text message and he got one back, always the exact same message in response, but it never failed to make him smile. 'I'm not beautiful, morning x' He opened the text and was surprised that it did not contain the usual words, instead the text displayed only two: 'We're busted.' Neal sighed, knowing that one of his lover's team had seen the text and were no doubt trying to figure out who he was and how he knew Spencer. Good Morning, a Criminal Minds + White Collar Crossover fanfic. AN: Written as a comment_fic. 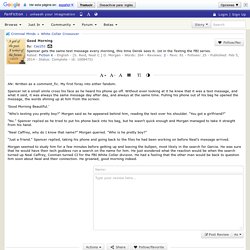 My first foray into either fandom. Spencer let a small smile cross his face as he heard his phone go off. Without even looking at it he knew that it was a text message, and what it said, it was always the same message day after day, and always at the same time. Pulling his phone out of his bag he opened the message, the words shining up at him from the screen. 'Good Morning Beautiful.' "Who's texting you pretty boy? 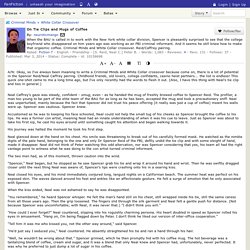 Childhood friends, old lovers, college confidants, casino heist partners... the list is endless! This quick one-shot came to me a long time ago, but I've only recently had the words to flesh it out. (Also, I have this thing with Neal's tie clip and ties in general.) Neal Caffrey's gaze was steady, confident - smug, even - as he handed the mug of freshly brewed coffee to Spencer Reid. The profiler, a man too young to be part of the elite team of the BAU for as long as he has been, accepted the mug and took a precautionary sniff. Accustomed as he was to keeping his face schooled, Neal could not help the small tug of his cheeks as Spencer brought the coffee to his lips. His journey was halted the moment he took his first step. Neal glanced down at the hand on his chest. Beautiful Things, Criminal Minds/White Collar, NC-17 - Floundering around in the dark. 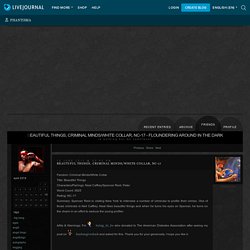 One of those criminals is Neil Caffrey. Neal likes beautiful things and when he turns his eyes on Spencer, he turns on the charm in an effort to seduce the young profiler. The List - Chapter 1 - Ardatli - Criminal Minds, Queer as Folk (US)

QAF and Criminal minds the list of the fuck off between BRiandon and BRian. Brandon the unsub in this story now is going after that list agin in the hopes of gaingin lost control. – chelseabarron

Darker Than Usual, a Supernatural + Listener Crossover fanfic. Monsters Are Real A interesting crossover with The Listener and Supernatural. 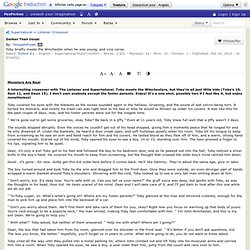 I don't own anybody except the foster parents. Unintended Consequences, a Criminal Minds + White Collar Crossover fanfic. Neal walked into the White Collar division fifteen minutes late and more than a little surprised that Peter wasn't waiting at the door ready to give him a hard time. 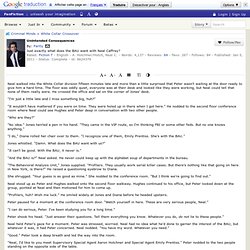 The floor was oddly quiet, everyone was at their desk and looked like they were working, but Neal could tell that none of them really were. He crossed the office and sat on the corner of Jones' desk. "I'm just a little late and I miss something big, huh? " "It wouldn't have mattered if you were on time. They were holed up in there when I got here. " "Who are they? " "No idea. " "I do," Diana rolled her chair over to them. Jones whistled. Coffee Run, a Criminal Minds + White Collar Crossover fanfic. A/N: ...I've got no explanation for this... Neal smiled, winking at the pretty new cashier behind the counter as he picked up the paper tray of coffee. Marissa blushed and smiled back, mouthing "call me" as he headed toward the entrance. Her number was on his receipt. Grinning roguishly over his shoulder at her as he walked Neal didn't notice the door swinging open until he heard the tinkling of its bell.

Unfortunately, the glass swung into him about the same time, sending his (and the team's) coffee tumbling out of his hands and all over his freshly pressed suit. "Ah…" he groaned, flicking steaming brown droplets off his fingers. "Oh, shoot. Neal glanced at the speaker, taking in mid-length brown hair and warm eyes. He smirked. That got him an embarrassed flush. Magic Chapter 1: We're Working With Who?, a Criminal Minds + White Collar Crossover fanfic. A/N: This fic has been a long time coming, considering how long ago I started planning it, but here it finally is- my Criminal Minds/White Collar crossover!

This story will focus on Reid and Neal (of course, since they are two of the most gorgeous men on the planet). This fic is gonna be dramatic and angsty and of course romantic all at once, and while the title may make no sense now, trust me- it will later! In the White Collar timeline, this is set loosely after Kate's death, and Criminal Minds- well, I haven't figured that out yet. The timelines may be out between the two shows, but oh well! This is my first foray into any fandom other than Criminal Minds, so I really hope I can do the White Collar characters justice! Dear Agony, a Supernatural + Vampire Diaries Crossover fanfic.

Kluas/Damon the gang tries to find Damon but he isn't found in time to leave for Italy with Klaus there is also the pert of Daomon's ring. – chelseabarron

Whiskey Lullaby, a Supernatural + Vampire Diaries Crossover fanfic. Title: My Side of the Story Author: Experiment 2637452 Genre: Romance/Angst Pairing: Dean/Damon Klaus/Damon plus Katherine Rating: M Summary: Dear Agony series Part 3: As the gang plots to rescue Damon, Stefan and Katherine reflect on their lives and how they intertwine with Damon. Stefan didn't know how to accurately place his feelings. He sighed in frustration. There were many reasons why Klaus would want Damon.

His older brother was strong and intelligent, and most of the time had an "I don't give a fuck" attitude. Lover After Me, a Supernatural + Vampire Diaries Crossover fanfic. Title: The Lover After Me Summary: Part 4 in the Dear Agony.

Klaus makes a decision which shocks everyone. Even though it seems like a victory, in the very end it seems Klaus in the ultimate winner. Lover After Me by Savage Garden. Paint Me a Portrait, a Criminal Minds + White Collar Crossover fanfic.

Neal has been commisoned for another painting wht happens when Peter finds out about the paintings. – chelseabarron

It is part two the boys revenge for Penelopes comissioned painting s of Dr. Reid and morgan – chelseabarron

The team has a "family dinner" together at Prentiss' apartment. T for mentions of sex, and language. NO PAIRINGS. – chelseabarron