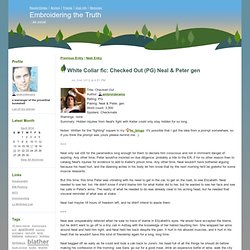 Notes: Written for the "fighting" square in my hc_bingo. It's possible that I got the idea from a prompt somewhere, so if you think the prompt was yours please remind me. :) Neal only sat still for the paramedics long enough for them to declare him conscious and not in imminent danger of expiring. But this time, this time Peter was vibrating with his need to get in the car, to get on the road, to see Elizabeth. Neal had maybe 18 hours of freedom left, and he didn't intend to waste them. Neal was unspeakably relieved when he saw no trace of blame in Elizabeth's eyes. He took one of the vicodins he'd barely touched after bruising his ribs months ago and stripped out of his clothes.

Neal woke in the dim gray of early morning. "What does that mean? " R is for Revenge Chapter 1, a white collar fanfic. Hey, so I'm a first time White Collar fanfic writer though I've read a whole lot out there and I thought I'd give it a go.

Neal is kidnapped with Elizabeth and told if he doeesn't paint the Stary night sky then Tyler Rand will hurt Elizabeth. Neal whump of left arm broken and gun shot not much recovery but nice story short. – chelseabarron

I'm an absolute sucker for Neal whump but we'll see if I'm actually any good at writing it. 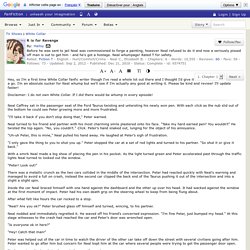 Please be kind and review! I'll update faster! Disclaimer: I do not own White Collar. If I did there would be whump in every episode! Neal Caffrey sat in the passenger seat of the Ford Taurus twisting and untwisting his newly won pen. "I'll take it back if you don't stop doing that," Peter warned. Neal turned to his friend and partner with his most charming smile plastered onto his face. "Uh-uh Peter, this is mine," Neal pulled his hand away. "I only gave the thing to you to shut you up. " With a smirk Neal made a big show of placing the pen in his pocket. "Peter! There was a metallic crunch as the two cars collided in the middle of the intersection.

Inside the car Neal braced himself with one hand against the dashboard and the other up over his head. WC Pairings ... A Fanfic Exchange Community - For angelita26 - Secondary Gain. Calis_1st - FIC: Trust Takes a Tumble. Title: Trust Takes a TumbleAuthor: calis_1stCharacters: Neal, Mozzie, Peter, DianaRating: PGWarning: Mention of canon character deathSpoilers: 4.04, Parting Shots, 4.05, Honor Among ThievesWord count: ~ 3500Disclaimer: Characters are all from the brilliant mind of Jeff Eastin. 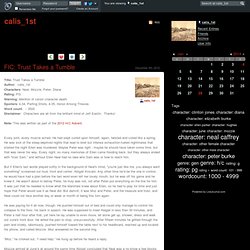 Note: This was written as part of the 2012 H/C Advent. Every joint, every muscle ached. He had slept curled upon himself, again, twisted and coiled like a spring. He was sick of the sleep-deprived nights that lead to brief but intense exhaustion-fueled nightmares that started the night Ellen was murdered. But if Ellen's last words played softly in the background of Neal's mind, "you're just like me, you always want something" screamed out loud, front and center. He was paying for it all now, though. “Moz,” he choked out, “I need help.”

Mozzie arrived at June’s at around the same time Abigail concluded that Neal was a no-show a few blocks away. “Come on, Neal,” Moz said, trying to help Neal back into bed. WC Pairings ... A Fanfic Exchange Community - For angelita26 - Secondary Gain.

Neal is hurt in the van along with Jones and Daina but Neal has been hit the worst and has to deal with back pain and seems like he might milk the sick leave. one shot – chelseabarron