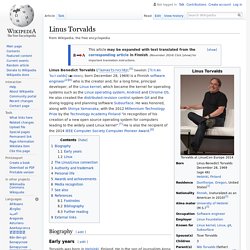 He is the son of journalists Anna and Nils Torvalds,[9] and the grandson of statistician Leo Törnqvist and of poet Ole Torvalds. Both of his parents were campus radicals at the University of Helsinki in the 1960s. His family belongs to the Swedish-speaking minority. Torvalds attended the University of Helsinki between 1988 and 1996,[11] graduating with a master's degree in computer science from NODES research group.[12] His academic career was interrupted after his first year of study when he joined the Finnish Army Uusimaa brigade, in the summer of 1989, selecting the 11-month officer training program to fulfill the mandatory military service of Finland. His interest in computers began with a Commodore VIC-20,[16] at the age of 11 in 1981, initially programming in BASIC, but later by directly accessing the 6502 CPU in machine code. Linux[edit] The Linus/Linux connection[edit] Authority and trademark[edit] 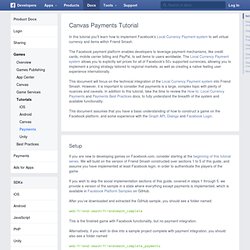 This will be a dedicated menu within the game where players will be offered to purchase Friend Smash Coins. We will present to the player a predefined list of different coin packages, each with varying price points and quantities. We'll also create a prominent 'Buy' button, which will trigger the purchase flow. Creating the store is a process involving several steps. Remember that at any time, you can always check your progress against the web-friend-smash/friendsmash_complete_payments version of the game, on GitHub. Step 3a: Creating the store button We'll broadly approach constructing the store in the same way a player will interact with it. 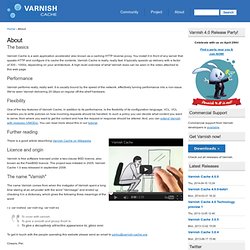 You install it in front of any server that speaks HTTP and configure it to cache the contents. Varnish Cache is really, really fast. It typically speeds up delivery with a factor of 300 - 1000x, depending on your architecture. A high level overview of what Varnish does can be seen in the video attached to this web page. Performance Varnish performs really, really well. Flexibility One of the key features of Varnish Cache, in addition to its performance, is the flexibility of its configuration language, VCL.

Further reading Licence and origin Varnish is free software licensed under a two-clause BSD licence, also known as the FreeBSD licence. The name "Varnish" The name Varnish comes from when the instigator of Varnish spent a long time staring at an art-poster with the word “Vernisage” and ended up checking it in a dictionary, which gives the following three meanings of the word: Cheers, Per. Underscore.js. 12 Top of the class Drupal tutorials for beginners, developers and intermidiates.

Here are some Free Drupal tutorials available on the web. 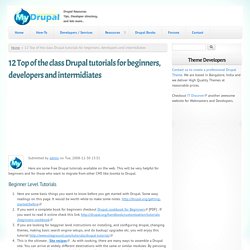 This will be very helpful for beginners and for those who want to migrate from other CMS like Joomla to Drupal. Beginner Level Tutorials Here are some basic things you want to know before you get started with Drupal. Some easy readings on this page. It would be worth while to make some notes. Intermidiate and Developer Tutorials Once you have got started and have your websites up. Other Interesting Tutorials / Resources Drupal Podcasts (link is external) from Lullabot - A great podcast for those who are really into Drupal Some resources on this site 20+ Drupal Videos for Beginners, Drupal How-to for selected topics. 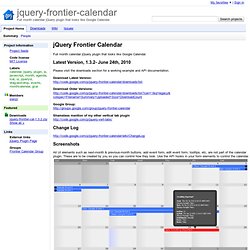 Latest Version, 1.3.2- June 24th, 2010 Please visit the downloads section for a working example and API documentation. Download Latest Version: Download Older Versions: Google Group: Shameless mention of my other vertical tab plugin Change Log Screenshots All UI elements such as next-month & previous-month buttons, add event form, edit event form, tooltips, etc, are not part of the calendar plugin. When there are too many agenda items to fit within a day cell a "more" link appears. You may change the background image via the CSS file.