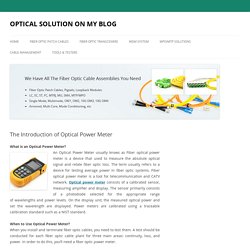 An Optical Power Meter usually knows as Fiber optical power meter is a device that used to measure the absolute optical signal and relate fiber optic loss. The term usually refers to a device for testing average power in fiber optic systems. Fiber optical power meter is a tool for telecommunication and CATV network. Optical power meter consists of a calibrated sensor, measuring amplifier and display. The sensor primarily consists of a photodiode selected for the appropriate range of wavelengths and power levels. OPTICAL SOLUTION ON MY BLOG. MTP technology with multi-fiber connectors offers ideal conditions for setting up high-performance data networks in data centers to handle future requirements. 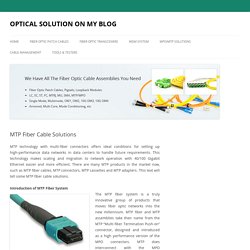 This technology makes scaling and migration to network operation with 40/100 Gigabit Ethernet easier and more efficient. There are many MTP products in the market now, such as MTP fiber cables, MTP connectors, MTP cassettes and MTP adapters. Fiber Optic Enclosures In Cabling Systems. Just like copper-based cabling systems, fiber-optic cabling systems have a few specialized components, including enclosures and connectors. 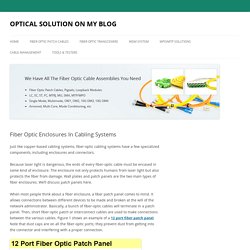 Because laser light is dangerous, the ends of every fiber-optic cable must be encased in some kind of enclosure. The enclosure not only protects humans from laser light but also protects the fiber from damage. Wall plates and patch panels are the two main types of fiber enclosures. We’ll discuss patch panels here. The Latest Generation of PON – NG-PON2. To meet the large demand for high capacity transmission in optical access systems, 10G-PON (10G Passive Optical Network) has already been standardized by IEEE (Institute of Electrical and Electronics Engineers) and ITU (International Telecommunication Union). 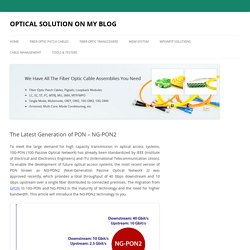 To enable the development of future optical access systems, the most recent version of PON known as NG-PON2 (Next-Generation Passive Optical Network 2) was approved recently, which provides a total throughput of 40 Gbps downstream and 10 Gbps upstream over a single fiber distributed to connected premises. The migration from GPON to 10G-PON and NG-PON2 is the maturity of technology and the need for higher bandwidth. This article will introduce the NG-PON2 technology to you. What Is NG-PON2? NG-PON2 is a 2015 telecommunications network standard for PON which was developed by ITU. Splicing enclosures and Cable terminations. The splicing trays are not designed to be left in the open environment and must be placed in some type of enclosure. 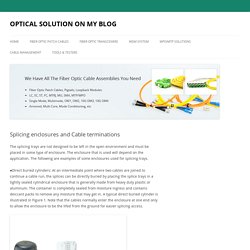 The enclosure that is used will depend on the application. The following are examples of some enclosures used for splicing trays. ●Direct buried cylinders: At an intermediate point where two cables are joined to continue a cable run, the splices can be directly buried by placing the splice trays in a tightly sealed cylindrical enclosure that is generally made from heavy duty plastic or aluminum. The container is completely sealed from moisture ingress and contains deiccant packs to remove any moisture that may get in. A typical direct buried cylinder is illustrated in Figure 1. ●Termination cabinets: At junction points where a lot of cables meet, the splicing trays are stored in a larger wall-mounted cable (approximately 500 × 100 mm) with a hinged door. How Will Fiber Optic Transceivers Evolve for Future Data Centers. In the modern data center, fiber optic transceivers always play an important role. 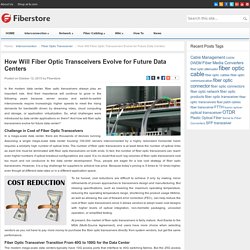 And their importance will continue to grow in the following years because server access and switch-to-switch interconnects require increasingly higher speeds to meet the rising demands for bandwidth driven by streaming video, cloud computing and storage, or application virtualization. So, what challenges were introduced by data center applications on them? From O to L: The Evolution of Optical Wavelength Bands. In optical fiber communications system, several transmission bands have been defined and standardized, from the original O-band to the U/XL-band. The E- and U/XL-bands have typically been avoided because they have high transmission loss regions. The E-band represents the water peak region, while the U/XL-band resides at the very end of the transmission window for silica glass.

Ribbon optical cables are now being deployed to meet this need, as they provide the highest fiber density relative to cable size, maximize utilization of pathway and spaces and facilitate ease of termination. Differences Between 40G QSFP LRL4 and PLRL4 Modules. Data centers regularly undertake their own great migration, to ever-higher-speed networks. 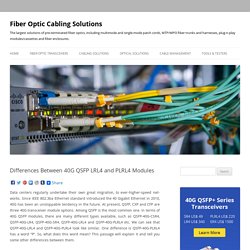 Since IEEE 802.3ba Ethernet standard introduced the 40 Gigabit Ethernet in 2010, 40G has been an unstoppable tendency in the future. At present, QSFP, CXP and CFP are three 40G transceiver module options. Among QSFP is the most common one. Knowledge of SFP Auto-Negotiation. We usually see fiber optic transceiver with descriptions like “10/100/1000 copper SFP” shown in the picture below. 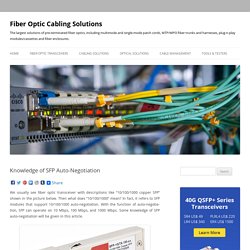 Then what does “10/100/1000” mean? In fact, it refers to SFP modules that support 10/100/1000 auto-negotiation. With the function of auto-negotiation, SFP can operate on 10 Mbps, 100 Mbps, and 1000 Mbps. What’s the Difference Between UPC and APC Connectors? We usually hear about descriptions like “LC/UPC multimode duplex fiber optic patch cable”, or “ST/APC single-mode simplex fiber optic jumper”. 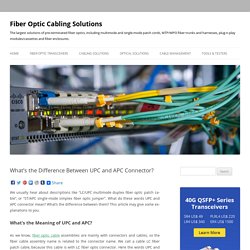 What do these words UPC and APC connector mean? What’s the difference between them? This article may give some explanations to you. What’s the Meaning of UPC and APC? As we know, fiber optic cable assemblies are mainly with connectors and cables, so the fiber cable assembly name is related to the connector name. Whenever a connector is installed on the end of fiber, loss is incurred. Three Types Physical Media Systems For 10 Gigabit Ethernet. Overview Dramatic growth in data center throughput has led to the increasing usage and demand for higher-performance servers, storage and interconnects. 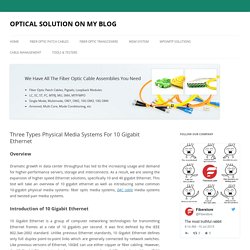 Are there any differences between LX, LH and LX/LH? We usually see LX SFP, LH SFP and LX/LH SFP on many websites, and many people show their confusion about them. Whether they are the same or different? If they are dissimilar, what differences between them on earth? The Commonly Used 1000BASE-X Standards about Ethernet Ethernet was the result of the research done at Xerox PARC in the early 1970s.

However, increasing the number of channels in such systems will eventually result in the usage of optical signal demultiplexing components with greater values of optical attenuation. Besides, when transmitted over long distances, the optical signal is highly attenuated. Therefore, to restore the optical power budget, it is necessary to implement optical signal amplification. Understanding Wavelengths in Fiber Optics. The light we are most familiar with is surely the light we can see. Our eyes are sensitive to light whose wavelength is in the range of about 400 nm to 700 nm, from the violet to the red. But for fiber optics with glass fibers, we use light in the infrared region which has wavelengths longer than visible light. Do You Know About Mode Conditioning Patch Cord? The great demand for increased bandwidth has prompted the release of the 802.3z standard (IEEE) for Gigabit Ethernet over optical fiber.

As we all know, 1000BASE-LX transceiver modules can only operate on single-mode fibers. However, this may pose a problem if an existing fiber network utilizes multimode fibers. When a single-mode fiber is launched into a multimode fiber, a phenomenon known as Differential Mode Delay (DMD) will appear. This effect can cause multiple signals to be generated which may confuse the receiver and produce errors.

To solve this problem, a mode conditioning patch cord is needed.