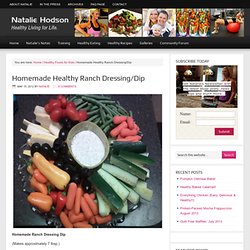 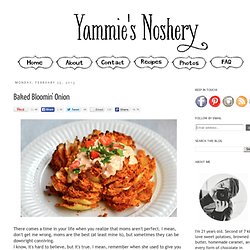 I mean, don't get me wrong, moms are the best (at least mine is), but sometimes they can be downright conniving.I know, it's hard to believe, but it's true. I mean, remember when she used to give you the prized soggy french fries at McDonald's? Well that was only because she actually wanted the crispy ones. And you know when she risked her life countless times to make sure your candy, cookie, or other such delicacy wasn't poison? 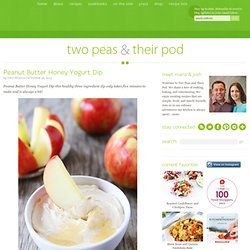 I think I’ve eaten an apple every day of my life since college. Well, besides my early pregnancy months. I couldn’t stomach much, not even apples. I am just testing out the old theory, “an apple a day keeps the doctor away.” Jessica Alba's Turkey Meatballs, Recipe from The Martha Stewart Show, Cauliflower Pizza Crust Recipe. Low carb, low calorie and gluten free cauliflower crust pizza that can take on any of your favourite toppings. 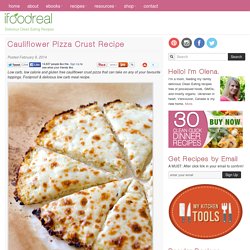 Foolproof & delicious low carb meal recipe. Cauliflower crust pizza has gained a huge popularity in the past few years among low carb dieters and mainly fitness enthusiasts. Because you are indulging with pizza, America’s favourite comfort food, and not wrecking your nutrition numbers. I held off making cauliflower pizza because I simply was confused by various cooking methods and knew it would take me some time to come up with a foolproof recipe. And I was right, it took me 3 pizzas and 2 days (on and off) and here we are. This cauliflower crust pizza is foolproof. Because I made all these pizza at various times, you will see different pans and crusts.

So, let’s make our low carb cauliflower pizza, shall we?! Firs, you need one large head of cauliflower, 7″ – 8″ in diameter. Place cauliflower florets in a food processor and process until “rice” texture. Ingredients. Fluffy Biscuits Recipe. Swedish Meatballs. Nothing beats homemade meatballs smothered in a creamy gravy sauce, and yes, they taste so much better than the IKEA version! 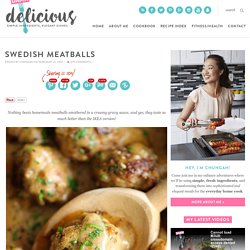 Remember those trips to Ikea where the budget-friendly furniture finds are the last things on your mind but all you can think about are those amazing swedish meatballs? Well, that was always me. But since we’ve moved to the Bay Area, our nearest Ikea is in the middle of the most trafficked area in the entire city so it’s really hard to get my swedish meatball fix when needed. Thankfully, I’ve found a homemade version that tastes even better than the original. These swedish meatballs have been on my bucket list for nearly 3 years, and I’m so glad to finally cross this off my list. And the sauce – you can’t forget about that creamy, heavenly gravy sauce that these meatballs are smothered in with the browned up meatball bits. Nothing beats homemade meatballs smothered in a creamy gravy sauce, and they taste much better than the IKEA version!

Ingredients: For the gravy. Skinny Crab and Artichoke Dip with Jalapeño. Forget the game; I’ll be neck-deep in the mini crockpot. 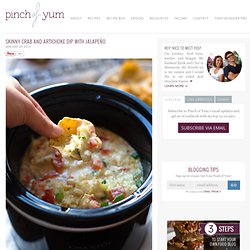 Except true thing –> we actually don’t really watch the Superbowl. Not that we’re anti or anything, and we love to go to Superbowl parties (not saying, just saying), but we just don’t have a TV. Kinda need one of those for the Superbowl. One time we tried to stream a live football game from the interwebs and somehow we ended up with a very scrachy, blippy, fuzzy NFL game with the audio all in Spanish. We also had a similar problem for the Olympics last summer. But you know what happens in the Philippines? But the Superbowl. Sorry, guys. Zucchini Parmesan Crisps. A healthy snack that’s incredibly crunchy, crispy and addicting! 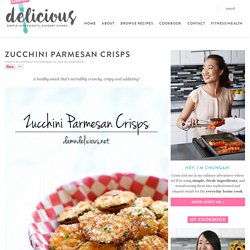 I have always been somewhat of a compulsive snacker. It’s how I get through my day. I’ll even skip through dinner so I can have more of a calorie allocation to snacks. But instead of the usual donut holes I snack on during the day, I decided to try something a little more healthier and something that included veggies and greens.

Hawaiian Pulled Pork Skillet Nachos with Pineapple Guacamole (Crock Pot Recipe!) I am an official spokesperson for The Laughing Cow® in 2014. 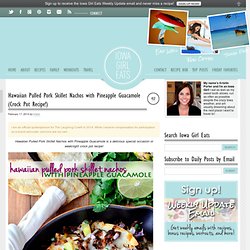 While I receive compensation for participation as a brand advocate, opinions are my own. Hawaiian Pulled Pork Skillet Nachos with Pineapple Guacamole is a delicious special occasion or weeknight crock pot recipe! Howdy, all! Mini Pizza Quinoa Bites. Change up pizza night with poppable, gluten-free Mini Pizza Quinoa Bites! 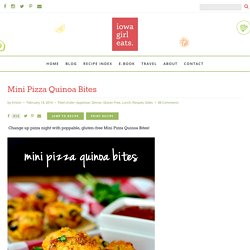 In addition to being excited that it’s Friday (and Valentine’s Day!) I’m also jazzed that warmer weather is on the way. We’re only talking 35 degrees here, give or take a few degrees, but up until this week we haven’t been above freezing since January. Wretched. However, like a friend recently mused on Facebook – what the hell would we talk about if the weather was just average? Aaanyway, I’ve got an extremely difficult recipe for you today. Toss some pizza-themed ingredients in bowl, scoop the mixture into mini muffin tins, and then bake. Mini Pizza Quinoa Bites are a riff on a couple of my favorite quinoa cups recipes, Mini Ham and Cheese Quinoa Cups and Mini BLT Quinoa Cups. Fresh Zucchini Guacamole. Pumpkin Peanut Butter Dip!