Eye-mites that hide and eat in our brows as we sleep finally pictured. They've got eight legs, feast on oily dead skin cells - and are living on your face right now. 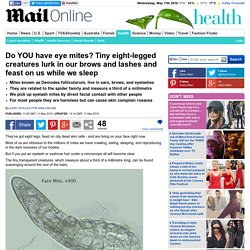 Most of us are oblivious to the millions of mites we have crawling, eating, sleeping, and reproducing in the dark recesses of our bodies. But if you put an eyelash or eyebrow hair under a microscope all will become clear. The tiny transparent creatures, which measure about a third of a millimetre long, can be found scavenging around the root of the hairs. While it's enough to - and literally does - make your skin crawl, the good news is eyelash mites are harmless.

Unless you're one of the unlucky few to get an allergic reaction, most of us will never know they are there. A recent study found the mites, which are invisible to the naked eye, were present in 100 per cent of the people they tested. We pick up eyelash mites by direct facial contact with other people – and they seem to prefer older hosts because they tend to have more oily skin. The forest in your mouth: Psychedelic images reveal the bacteria lurking on your teeth. The human mouth is a breeding ground for germs - and as these stunning images show, a huge range of bacteria grows inside all our mouths. 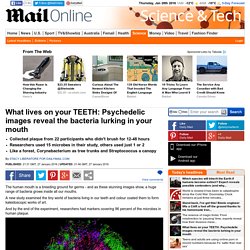 A new study examined the tiny world of bacteria living in our teeth and colour coated them to form kaleidoscopic works of art. Blame your parents for the microscopic MITES that live on your face. They are tiny eight legged mites, related to spiders and look rather like an ice cream cone with stubby legs at one end. 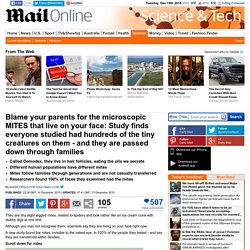 Although you may not recognise them, scientists say they are living on your face right now. A new study found the mites, invisible to the naked eye, in 100% of the people they tested - and say they are transferred within families. Scroll down for video Mites follow families through generations and are not casually transferred, researchers found. Pictured, D. folliculorum, tiny arachnids found in everyone. Dubbed 'face mites,' D. folliculorum are actually tiny arachnids that inhabit hairs throughout the human body and consume skin cells and oils. Mites exist in human ears, eyebrows, and eyelashes as well as hairs that cover nipples and genitals. For most people, mites are harmless. For some, however, mites can be associated with various skin and eye disorders including rosacea and blepharitis. Human microbiome. A diagram of the microbiome of the skin Bacteria[edit] Populations of microbes (such as bacteria and yeasts) inhabit the skin and mucosa. 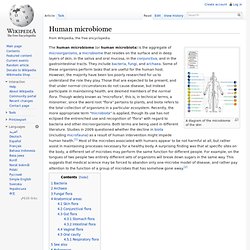 Their role forms part of normal, healthy human physiology, however if microbe numbers grow beyond their typical ranges (often due to a compromised immune system) or if microbes populate atypical areas of the body (such as through poor hygiene or injury), disease can result. In 2012, some 200 researchers from some 80 research institutions comprising the Human Microbiome Project (HMP) Consortium have used advanced DNA-sequencing to identify and catalogue the thousands of microorganisms co-existing with humans. This study examined, amongst other things, the carbohydrate active enzymes from microbial populations from twelve sites on and in the human body, and concluded that microbes colonise each site to utilise the available sugars.

Escherichia coli (a.k.a. The vaginal microflora consist mostly of various lactobacillus species. The Human Microbiome. Structure, function and diversity of the healthy human microbiome. Microbes: The Trillions of Creatures Governing Your Health. Human Microbiome Project DACC - Home. Check out every single kind of microbe in your body online — all 5 million of them.

List of human flora. From Wikipedia, the free encyclopedia This article lists some of the species recognized as human flora in humans. 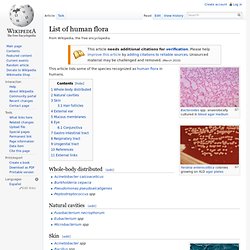 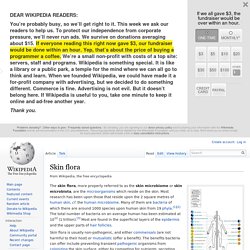 Species variety[edit] Bacteria[edit] The estimate of the number of species present on skin bacteria has been radically changed by the use of 16S ribosomal RNA to identify bacterial species present on skin samples direct from their genetic material. Previously such identification had depended upon microbiological culture upon which many varieties of bacteria did not grow and so were hidden to science.[1] Staphylococcus epidermidis and Staphylococcus aureus were thought from cultural based research to be dominant. Our Microbiomes, Ourselves. Happy Summer. You’re Covered in Fungus. Ten years before the brutal genocide, a religious fervor gripped Kibeho as dozens claimed the Virgin Mary had appeared to them. 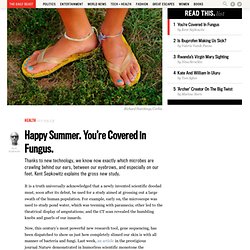 One of the chosen recalls her disturbing prophecy. Before Kibeho, a village spiraling up one of the area’s many hills, became a notorious killing ground during the Rwandan genocide, it was the country’s most celebrated holy spot. For nine years in the 1980s, it gained worldwide fame after a streak of schoolgirls claimed the Virgin Mary appeared to them with messages, including one that foreshadowed the country’s devastating genocide. Your Changing Microbiome. Aagaard, K., Riehle, K., Ma, J., Segata, N., Mistretta, T. 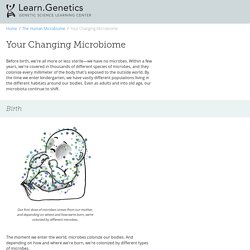