Scientology in the News 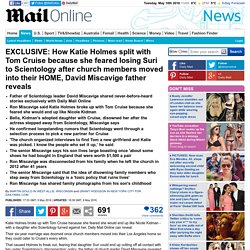 Their six-year marriage was doomed once church members moved into their Los Angeles home so they could cater to Cruise’s every whim. That caused Holmes to freak out, fearing that daughter Suri could end up cutting off all contact with her under Scientology’s ‘disconnection’ policy, the father of church leader David Miscavige revealed in an exclusive interview with Daily Mail Online. ‘It’s a toxic policy that ruins lives,’ said Ron Miscavige, 80, whose scathing memoir about his son, Ruthless, was published last week.

‘Katie just didn’t want that to happen so she left.’ Scroll down for video. 'It was like a scene out of Tom Cruise’s Mission Impossible.' How estranged father of Scientology leader David Miscavige escaped from the Church is revealed in the memoir his son is trying to BAN. David Miscavige, the Scientology leader who was Tom Cruise’s best man at two of his weddings, is engaged in a new war with his own father over a new book, Daily Mail Online has learned exclusively. 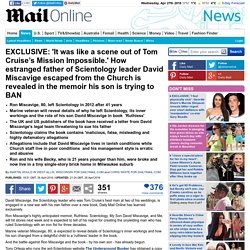 Ron Miscavige's highly anticipated memoir, Ruthless: Scientology, My Son David Miscavige, and Me, will hit stores next week and is expected to tell of his regret for creating the unyielding man who has ruled Scientology with an iron fist for three decades. Marine veteran Miscavige, 80, is expected to reveal details of Scientology’s inner workings and how his son changed from a delightful child to a 'ruthless' leader in the book. And the battle against Ron Miscavige and the book - by his own son - has already begun.

Tony Ortega,who runs the ant-Scientology website The Underground Bunker has obtained a copy of a letter from the Church of Scientology demanding that that the book not be published by Silvertail Books in Great Britain. Ortega says that US publisher St. Ruthless will be released May 3. Going Clear review: 'an ocean of weirdness' Scientology: what to read. Church of Scientology Head Spied on Father, Left Him to Die from Apparent Heart Attack: Report. The head of the Church of Scientology, David Miscavige, hired detectives to spy on his father who he feared could leak out information about the secretive organisation. 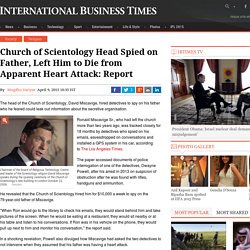 Chairman of the board of Religious Technology Centre and leader of the Scientology religion David Miscavige speaks during the opening ceremony of the Church of Scientology's new building in London October 22, 2006. Reuters Ronald Miscavige Sr., who had left the church more than two years ago, was tracked closely for 18 months by detectives who spied on his emails, eavesdropped on conversations and installed a GPS system in his car, according to The Los Angeles Times. Our big fat Scientology wedding: An eternal soul called a Thetan, 'E-meters' that scan thoughts and 'granting beingness' to their new baby... Meet the British couple who insist they are NOT part of a cult. By Elizabeth Sanderson Published: 22:45 GMT, 29 March 2014 | Updated: 15:42 GMT, 30 March 2014 At first glance, it appears the same as any modern wedding. 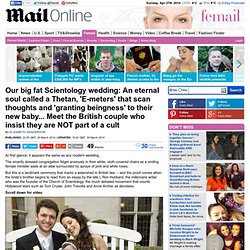 The smartly dressed congregation fidget anxiously in their white, cloth-covered chairs as a smiling female minister waits at an altar surrounded by sprays of pink and white roses. But this is a landmark ceremony that marks a watershed in British law – and the proof comes when the bride’s brother begins to read from an essay by the late L Ron Hubbard, the millionaire writer who was the founder of the Church of Scientology, the much debated movement that counts Hollywood stars such as Tom Cruise, John Travolta and Anne Archer as devotees. Scroll down for video Scientology wedding: Louisa and Alessandro Calcioli, pictured with their daughter Ayla, married last month at the Scientology chapel in Blackfriars, London The couple began a legal fight to have their faith recognised in law after becoming engaged six years ago.

The book Scientologists kept you from reading for 27-years: Banned biography of L. Ron Hubbard reveals the bizarre sex-rituals, phony war record and racist writings of church founder. Bare-Faced Messiah was first published in 1986 but the Church of Scientology has successfully kept it off the shelves for 27-yearsWritten by British journalist Russell Miller about Scientology founder L. 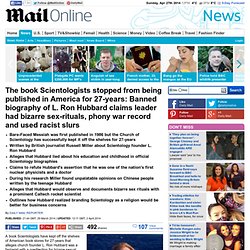 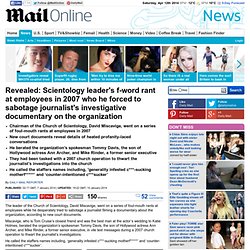 The house that Scientology built: Tom Cruise and John Travolta are in the front row to see $145m cathedral where members will be trained to develop 'super powers' Less than 6,000 turned out for the unveiling of Scientology's new Flag Building in Clearwater, Florida yesterdayActors Tom Cruise, John Travolta and Kelly Preston were in attendanceIt is the tallest building in Clearwater, Florida and the home to Scientology's 'Super Power' programThe church broke ground on the building in 1998 but construction has been off and on for the past 15 years By Ashley Collman. 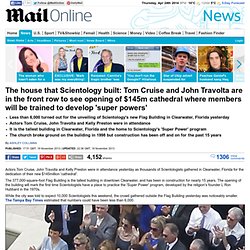 Scientology Alien Space Cathedral Revealed? Lee Rannals for redOrbit.com — Your Universe Online A gigantic symbol etched into the desert in New Mexico holds below it a secret “alien space cathedral” built by Tom Cruise’s Scientology church, according to one man’s account. 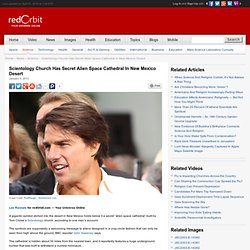 The symbols are supposedly a welcoming message to aliens designed in a crop-circle fashion that can only be seen from high above the ground, BBC reporter John Sweeney says. The cathedral is hidden about 30 miles from the nearest town, and it reportedly features a huge underground bunker that was built to withstand a nuclear holocaust. Sweeney says that deep inside sealed vaults within the alien space cathedral are titanium caskets that hold the original texts of founder L Ron Hubbard on gold discs.

These are considered to be the religion’s most sacred scriptures. Jenna Miscavige Hill, niece of Scientology leader, exposes Church of Scientology in new book. At age 9, Jenna was living at a Scientologist compound in the California desert called the Ranch. ( ) Jenna Miscavige Hill as a tot with her parents, who, as Sea Org members, left many child-rearing duties to church members. ( ) At the age of 6, most kids are learning their numbers and playing with blocks. 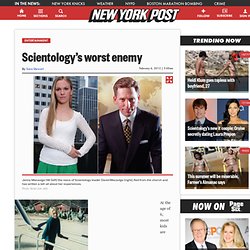 According to Jenna Miscavige Hill, she was hauling rocks on a chain gang in the desert. “We would get the rocks out of a running creek,” says the slight, 29-year-old blonde. “And it was freezing cold. Jenna Miscavige Hill: Church Of Scientology Forced Women Into Abortions, Abuse, Manual Labor. Former Scientologist Jenna Miscavige Hill joined HuffPost Live Thursday to share her personal story of growing up in the church and to explain how she escaped from it. 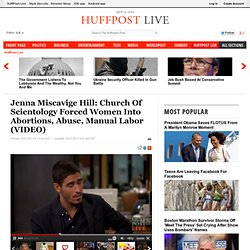 Hill, the niece of church leader David Miscavige and author of Beyond Belief, told HuffPost Live host Ahmed Shihab-Eldin about the oppressive practices of the church, which include forced abortion and abuse. "If you do become pregnant when you're there, you get kicked out," she said. "Or many of my friends were actually coerced into having abortions. " Hill also described tales of forced labor and abusive teachers, and said she knew she had to leave the church after being exposed to the outside world on a mission trip abroad. "When we went back to LA after that mission, it was like, everything was in plain view," she said.

The religion, which believes a sinister extraterrestrial being called Xenu brought billions of people to earth in spaceships similar to DC8 airliners, operates a giant underground base hidden deep within the New Mexico desert. Scientology leader¿s niece tell-all memoir entitled ¿Beyond Belief: My Secret Life inside Scientology and My Harrowing Escape¿

William Sweeney sues Scientology-based detox clinic after he jumped off balcony following treatment. William Sweeney accuses 'non-medical' clinic of weaning him off prescribed drugs too fastHe says he was left unsupervised and not asked if he was having withdrawal symptomsSuffered multiple fractures after throwing himself off third floor at centreThere have been five deaths at another Scientology-linked rehab clinic since 2005 By Emma Reynolds Published: 08:38 GMT, 20 September 2012 | Updated: 12:05 GMT, 20 September 2012 A former drug and alcohol addict is suing a Scientology-based clinic after he jumped off a third-floor balcony and suffered 'severe injuries'. William Sweeney has accused the Pur Detox clinic in Dana Point, California, of negligence, medical malpractice and negligent supervision.

He claims that the clinic tried to wean him off his prescribed medication - which included an anti-psychotic and an anti-opiate - too quickly, following only a 20-minute interview. Great-grandson of 'conman' L Ron Hubbard claims Scientology was destined to destroy Tom and Katie's family just like his own. By Daily Mail Reporter Published: 21:02 GMT, 26 July 2012 | Updated: 23:09 GMT, 26 July 2012 Jamie DeWolf, the great-grandson of Scientology founder L. Ron Hubbard, has come out with new explosive claims against the church, claiming it is nothing more than a 'well-funded psychotic beast' that 'destroyed' his family, and Tom Cruise and Katie Holmes' marriage was just the controversial religion's latest casualty. The Bay Area resident is the grandson of Ron DeWolf, L. Tom Cruise is believed to 'have telekinetic and telepathic powers', according to Scientologists. By Daily Mail Reporter PUBLISHED: 00:40 GMT, 11 July 2012 | UPDATED: 18:10 GMT, 12 July 2012 The Church Of Scientology allegedly believes it's most famous celebrity convert Tom Cruise has telekinetic and telepathic powers, it has been reported.

Tom, 50, is the most famous follower of the religion and an investigation by Rolling Stone back in 2006 revealed that he had reached an advanced level of Scientology and was known as an ‘Operating Thetan’ or an ‘OT’. The author of the investigation, Janet Reitman, explained that OTs ‘have total control over themselves and their environment. Scroll down for video... Terrorised by Tom's cult: As a war reporter JOHN SWEENEY was gassed, shot at and shelled ¿ but nothing scared him as much as being hounded by the Scientologists. Scientology: Pinching, purification and finding The Bridge to Total Freedom: My very sinister induction at the Scientology HQ... just three days ago on July 4. Scientology: Son of Church president Heber Jentzsch had troubled life.

Scientology: Karen de la Carriere former wife of Church president Herber Jentzsch 'not allowed to see son's body in morgue' SCIENTOLOGY PRESIDENT'S SON DIES; DEATH OF ALEXANDER JENTZSCH KEPT FROM MOTHER, AN EX-MEMBER. President Of Scientology's Son Dies After Having A High Fever, Mother Says 'I'm Not Allowed To See My Own Son's Body' By Jen Heger – Radar Assistant Managing Editor Scientologist Alexander Jentzsch — the 27-year-old son of the president of the organization Heber Jentzsch, who hasn’t been seen in public since 2004 — died on July 2 in the San Fernando Valley, allegedly of a high fever, and his mother, Karen de la Carriere, a former church member, tells RadarOnline.com exclusively that she isn’t going to be allowed to see her son’s body, which is at the Los Angeles County Morgue.

Karen de la Carriere — who was formerly married to Alexander’s father Heber — told RadarOnline.com in an extremely emotional telephone interview, “My daughter-in-law, Alexander’s wife, isn’t allowing me to view my own son’s body. My son’s wife, and her parents are Scientologists, and I sent a friend of mine over to their house today with a letter for his wife.