Netflix update now lets you download episodes to watch OFFLINE. The update is now available for iOS 8.0 or later, and Android 4.4.2 or laterNot all programmes and films are available yet, but some of Netflix's biggest hits such as 'Orange is The New Black' are includedThe move follows similar strategies by Netflix's rivals, including Amazon By Shivali Best For Mailonline Published: 15:34 GMT, 30 November 2016 | Updated: 01:49 GMT, 1 December 2016 When you are in the middle of your favourite series, it can be painful having to step away from your computer. 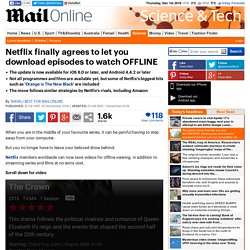 The Crown's real stars revealed as 20,000 costumes were designed with attention to detail. Very few people can claim to have handled the Queen’s undergarments, let alone laced a young Princess Elizabeth into her corset, arranging her petticoats and rolling sheer stockings up the royal calves. 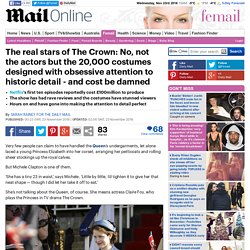 But Michele Clapton is one of them. ‘She has a tiny 23 in waist,’ says Michele. ‘Little by little, I’d tighten it to give her that neat shape — though I did let her take it off to eat.’ Netflix hidden gems. The Crown: the Royal family are 'nervous' about Netflix's new £100 million series. Stranger Things: Is Millie Bobby Brown missing season two, and everything else you need to know.

Stranger Things creators Matt and Ross Duffer: 'Winona Ryder's never had a part like this before' The Crown: the Royal family are 'nervous' about Netflix's new £100 million series. King of cinema Baz Luhrmann on taking over Netflix, fatherhood and working with his Oscar-winning wife. Uk.businessinsider. Stranger Things: Winona Ryder stars in Netflix's love letter to classic sci-fi. Netflix hidden gems. Top 10: New to Netflix UK, May 2016 - On demand. StumbleUpon. The 80 best movies on Netflix UK. Better Call Saul doesn't have to be Breaking Bad and 4 other things we learned from the latest episode  The best TV shows on Netflix - TV. Unogs tool helps you easily find ANYTHING on Netflix in any country.

If you struggle to think of something to watch on Netflix on a Saturday night and don't fancy scouring the recently released list of codes, this tool could be for you. 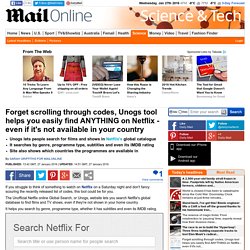 Although Netflix offers its own built-in search option, it doesn't feature as many specific filters as the Unogs site. Here are some examples: Asian Action Movies (77232) Netflix - Regardez des séries TV en ligne, Regardez des films en ligne. NetFlix Streaming by Alternate Genres. Revealed: The secret codes that can find what you REALLY want to watch on Netflix  Searching for a movie to stream on Netflix can take forever if you don’t know exactly what you’re looking for. 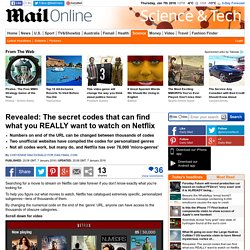 To help you figure out what movies to watch, Netflix has catalogued extremely specific, personalized subgenres—tens of thousands of them. By changing the numerical code on the end of the ‘genre’ URL, anyone can have access to the thousands of obscure categories. Scroll down for video Searching for a movie to stream on Netflix can take forever if you don’t know exactly what you’re looking for.

To help you figure out what movies to watch, Netflix has catalogued extremely specific, personalized subgenres—tens of thousands of them Two unofficial websites have compiled the codes for thousands of these personalized subgroups, so you can browse the lists to see what suits your interests, and plug in the code that matches up. Each of the genres are categorized numerically, so the code at the end of the genre URL can be changed to switch between them.

Marvel gets gritty in Netflix's 'Daredevil,' and it's glorious. Warning: This post contains mild spoilers from the first 5 episodes of Marvel's Daredevil. 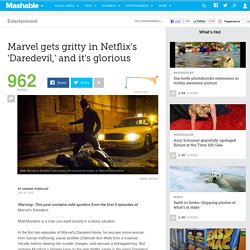 Matt Murdock is a man you want around in a sticky situation. In the first two episodes of Marvel's Daredevil alone, he rescues some woman from human trafficking, saves another (Deborah Ann Woll) from a masked intruder before clearing her murder charges, and rescues a kidnapped boy. But perhaps Murdock's biggest save on the new Netflix series is the name Daredevil itself. Prior to the TV series, which premiered Friday in a big Netflix-style episode dump, the name Daredevil had been pretty sullied.

Sorry, Ben Affleck, but it's true. The 2003 film left a cheesy aftertaste that, even after more than a decade, seemed to followed the name. Excellent news: 'Marvel's Daredevil' renewed at Netflix. David Tennant cast as villain in Marvel's Netflix series 'A.K.A. Jessica Jones' LONDON — Fans of the popular former time lord David Tennant will be very happy to hear he's been cast as the villain in Marvel's forthcoming series, A.K.A. 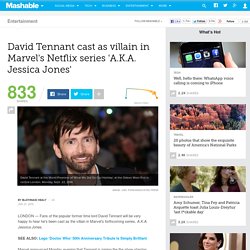 Jessica Jones. Marvel announced Monday evening that Tennant is joining the the show starring Krysten Ritter (Don't Trust the B—— in Apartment 23) and Mike Colter (The Good Wife), who will play Jessica Jones and Luke Cage. Marvel has found its star for Netflix's 'Jessica Jones' UPDATE, 12/5/14: Marvel has confirmed the casting. 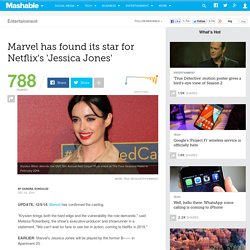 "Krysten brings both the hard edge and the vulnerability the role demands," said Melissa Rosenberg, the show's executive producer and showrunner in a statement. "We can't wait for fans to see her in action, coming to Netflix in 2015. " EARLIER: Marvel's Jessica Jones will be played by the former B—— in Apartment 23. Krysten Ritter will, according to Deadline, topline the forthcoming superhero series for Netflix.

Netflix and reps for Ritter have not yet responded to requests for comment. Jessica Jones is the second of a four-series (+ 1 miniseries) deal in progress between Marvel and Netflix, who will debut Daredevil, starring Charlie Cox as the title character, early next year. The character, meanwhile, will be the second female character to lead a Marvel TV project. Mike Colter (The Following) is rumored to be in the running for male lead for Luke Cage for the series, which will consist of a 13-episode first season. Netflix to run 'Unbreakable Kimmy Schmidt' in March. Netflix has scooped up Unbreakable Kimmy Schmidt, a Tina Fey and Robert Carlock collaboration that was supposed to run on NBC — until NBC's "drama-heavy mid-season schedule" got in the way. 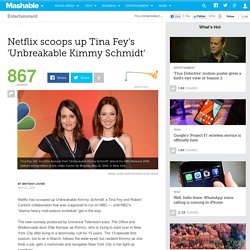 The new comedy produced by Universal Television stars The Office and Bridesmaids alum Ellie Kemper as Kimmy, who is trying to start over in New York City after living in a doomsday cult for 15 years. The 13-episode first season, set to air in March, follows the wide-eyed, but resilient Kimmy as she finds a job, gets a roommate and navigates New York City in her light-up sneakers. 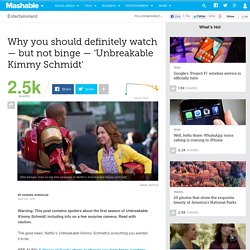 Read with caution. Emmys: How will Netflix perform? Forgive us for getting the sense that Netflix, with its spiraling momentum and zero creative restraints, wasn't just crashing the Emmys party — it was strutting in, ordering a round for everyone, taking over the DJ booth and lighting up the dance floor. Well, if last year's Emmys ceremony was the moment it got past the bouncer, this year it got too drunk and fell on its face. SEE ALSO: Emmys 2014: The Complete Winners List Streamed shows first became eligible for certain categories in 2008, and five years later, House of Cards cracked TV's 64-year hold on the trophies with three wins: directing, casting and cinematography.

Netflix Launches Site Dedicated to Spoilers. Everyone hates spoilers, right? Nothing worse than someone blabbing out the murders in yesterday's episode of Game of Thrones, which you haven't had time to see yet. Netflix, however, seems to think that spoilers can be fun, so it launched a special section of its site dedicated to showing you the pivotal moments in many popular films and TV shows. Besides spoiling yourself in a Russian roulette-styled app, which randomly chooses from a database of spoilers, you can also take a quiz to see what type of spoiler you are, or vote on which spoilers should be in the public domain — that is, which are so common that they can be considered harmless.

10 Countries With the Fastest Netflix Speeds [CHART] What's coming to Netflix in February and what's disappearing. February will be another month of Netflix playing fast and loose with our hearts thanks to its constantly rotating catalog of movies and TV shows available to stream. But at least they've wised up to the emotional turmoil they put eager customers through. The company now releases lists of the changes you can expect in the upcoming month so you can prepare accordingly. Several Batman and James Bond movies are among the bigger titles that will expire as well as Apocalypse Now. MASH the movie will be gone, but M*A*S*H the TV series will take its place.

The third season of House of Cards, as promised, will arrive February 27. For better or worse, no new beloved 90s sitcoms will be appearing on the site in its entirety, so you're all set to continue and/or recover from your Friends binge watch. 12 Signs You're Addicted to Netflix. There's nothing like a free hour on Friday night to send your whole weekend into an all-out Netflix binge fest. It starts off innocently enough. You plan to watch one episode of House of Cards before heading out to interact with real people at a real bar. Six hours later, the bar's closing down, your friends are heading home and you're still on the couch wondering how you blew through half a season.

Netflix's Data Points Are Not the Usual Suspects. Some businesses would love to get basic information like your name, age and gender to better understand how to market to you in the future. Netflix could care less. Netflix used to place an emphasis on collecting these types of biographical details about its users, but it eventually decided the data wasn't particularly useful. "It really doesn't matter if you are a 60-year-old woman or a 20-year-old man because a 20-year-old man can watch Say Yes To The Dress and a 60-year-old woman could watch Hellboy," Todd Yellin, VP of product innovation at Netflix, told Mashable in an interview this week.