Nanoparticles and nanosafety: the big picture. Nanoparticles — or nanomaterials, as they are often called — are chemical objects with dimensions in the range of 1-100 nanometres (nm). 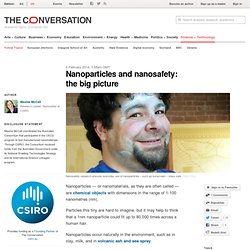 Particles this tiny are hard to imagine, but it may help to think that a 1nm nanoparticle could fit up to 80,000 times across a human hair. Nanoparticles occur naturally in the environment, such as in clay, milk, and in volcanic ash and sea spray. Manufacturers also make nanoparticles for use in a range of everyday products. The surfaces of your fridge may hold silver nanoparticles to stop bacteria growingSunscreen applied as a clear film to your skin may contain zinc oxide or titanium dioxide nanoparticles to provide broad-spectrum sun protectionThe frame of your new bicycle may even contain carbon nanotubes to make it stronger and lighter than older bikes. No, metal oxide nanoparticles in your food won’t kill you. Recently the American publication Mother Jones published an article on the dangers of food laced with tiny metal oxide particles. 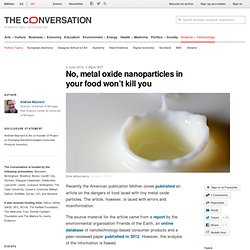 The article, however, is laced with errors and misinformation. The source material for the article came from a report by the environmental organisation Friends of the Earth, an online database of nanotechnology-based consumer products and a peer-reviewed paper published in 2012. However, the analysis of the information is flawed. DNA-based logic gates operate inside cockroach cells. DNA-based nanotechnology has been around for more than 30 years, but it really took off in 2006, when DNA origami was featured on the cover of Nature. 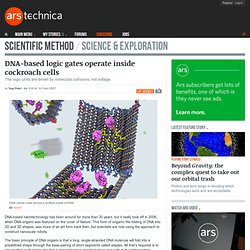 This form of origami, the folding of DNA into 2D and 3D shapes, was more of an art form back then, but scientists are now using the approach to construct nanoscale robots. Scientists Accidentally Made Color-Changing Paint From Gold Nanoparticles. It's like Hypercolor but for touch instead of heat. 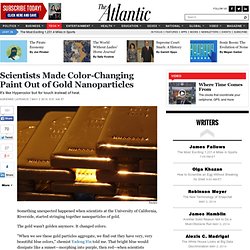 Reuters Something unexpected happened when scientists at the University of California, Riverside, started stringing together nanoparticles of gold. The gold wasn't golden anymore. It changed colors. "When we see these gold particles aggregate, we find out they have very, very beautiful blue colors," chemist Yadong Yin told me. The finding was one of those happy scientific accidents that turns into something bigger. First-functioning-carbon-nanotube-computer-developed-8842104. The machine is rudimentary, but it is running a basic operating system, and can perform calculations, but it probably wouldn’t stand up to the rigours of GTA 5. 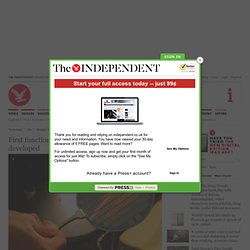 It’s most important as proof of concept, that computers can be made of more efficient materials Currently, computer processors are made out of silicon, an element that has so far done everything asked of it. However, as the art of miniaturisation improves, computer scientists are beginning to realise it has a limit to its abilities. According to Moore’s Law, formulated in 1965, the density of transistors – and, effectively the processing power of computers – doubles every two years. But as silicon processors have become smaller and cheaper, so too have they become hotter. Nanosheets Made from Ancient Egyptian Blue Emit Invisible IR Radiation. In a surprise discovery, researchers at the University of Georgia (UGA), Athens, Georgia (US), found that the calcium copper silicate in Egyptian blue — humanity's first artificial pigment, used in paintings on tombs and artifacts throughout the Mediterranean millennia ago — breaks apart into nanosheets so thin that thousands would fit across the width of a human hair. 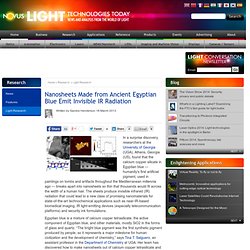 Iridescent And Ultra Water Proof Material Created At Penn State. Image Caption: A drop of water sits on a material with structural color and superhydrophobicity. 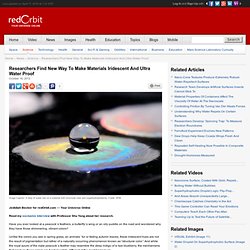 Credit: AFM Jedidiah Becker for redOrbit.com — Your Universe Online Read my exclusive interview with Professor Shu Yang about her research. Have you ever looked at a peacock´s feathers, a butterfly´s wing or an oily puddle on the road and wondered why they have those shimmering, vibrant colors? Unlike the colors you see in spring grass, an animals´ fur or fading autumn leaves, these iridescent hues are not the result of pigmentation but rather of a naturally occurring phenomenon known as “structural color.” According to a study published in the journal Advanced Functional Materials, a team of researchers from the University of Pennsylvania has found a new way to artificially recreate structural colors in a laboratory while also combining them with another highly useful physical property: the ability to strongly repel water known as “superhydrophobicity.” Scientists reveal new method to 'grow' electronic sensors inside human tissue.

Researchers say breakthrough is 'first step' towards an artificial heartCould be used to implant sensors into patients to monitor medical issuesCan also be used in labs to study the effects of new drugs By Mark Prigg Published: 14:13 GMT, 27 August 2012 | Updated: 16:22 GMT, 28 August 2012 Cyborgs melding human and robotic technology together have finally come a step closer to reality. 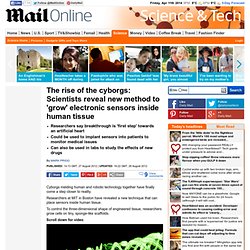 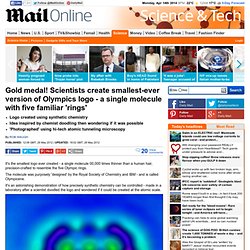 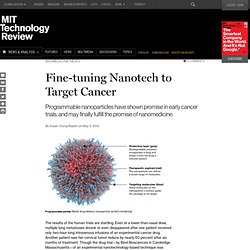 The results of the human trials are startling. Even at a lower-than-usual dose, multiple lung metastases shrank or even disappeared after one patient received only two-hour-long intravenous infusions of an experimental cancer drug. Another patient saw her cervical tumor reduce by nearly 60 percent after six months of treatment. Though the drug trial—by Bind Biosciences in Cambridge, Massachusetts—of an experimental nanotechnology-based technique was designed simply to show whether the technology is safe, the encouraging results revive hopes that nanomedicine could realize its elusive promise. For more than a decade, researchers have been trying to develop nanoparticles that would deliver drugs more effectively and safely. Nanowires Covered in Nanoparticles Boost Performance. Decoration with nanoparticles creates intricate surface patterns full of nooks and crannies, twists and turns that greatly improve surface area.

Image courtesy of the Stanford Nanocharacterization Laboratory. By “decorating” nanowires with nanoparticles, engineers at Stanford University were able to greatly improve surface area, resulting in increased electrical and catalytic performance. The hope is that technology like this may lead to better lithium-ion batteries, more efficient solar cells and improved catalysts.

Scientists use world's fastest 3D printer to create amazingly detailed F1 car. By John Hutchinson Published: 00:31 GMT, 31 March 2012 | Updated: 00:36 GMT, 31 March 2012 Making complex, large 3D structures would normally take hours or even days to perfect. 1,000 globes on a grain of salt: IBM creates world's smallest map... of the world. By Amy Oliver Updated: 15:44 GMT, 19 January 2012 Scientists in Zurich have created the world's smallest 3D map - of the world. IBM's perfectly formed 'nano-world', has now been accepted by the Guinness World Record organisation. The map measures a miniscule 22 by 11 micrometers. Or, to put it in perspective, 1,000 maps would fit on just one grain of salt. Invisible chips? IBM stores data inside just 12 atoms - and can spell words on a 'drive' built from 100. Nanotechnology. Cookies on the New Scientist website close Our website uses cookies, which are small text files that are widely used in order to make websites work more effectively.