Family Chrysomelidae - Leaf Beetles. 3D scans reveal a new species of millipede in stunning detail. Using a technique known as micro-CT, scientists have shed light on the insect, named Ommatoiulus avatarThe resulting images has revealed the millipede in incredible detail, while also keeping the specimens intactTechnique allowed the scientists to get a detailed look at the millipede's genitals, known as the gonopodsMuseum of Natural History in Vienna says different shapes of gonopod can help scientists identify new species By Ellie Zolfagharifard For Dailymail.com Published: 19:43 GMT, 28 August 2015 | Updated: 21:32 GMT, 28 August 2015 It may look like something from an alien planet, but this creature is in fact a humble millipede. 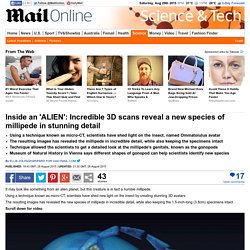 Using a technique known as micro-CT, scientists have shed new light on the insect by creating stunning 3D avatars. The resulting images has revealed the new species of millipede in incredible detail, while also keeping the 1.5-inch-long (3.8cm) specimens intact. Scroll down for video. Insects May Be Able To Feel Fear, Anger And Empathy, After All. Source: www.brainblogger.com | Original Post Date: June 26, 2015 – A recent survey suggests that for most of us that have ever had a pet companion, it’s a no-brainer that mammals and birds are emotional creatures, sharing emotions with multiple species and not just their own. 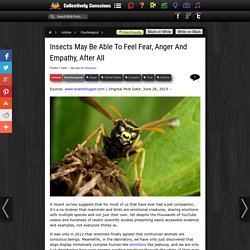 Yet despite the thousands of YouTube videos and hundreds of recent scientific studies presenting easily accessible evidence and examples, not everyone thinks so. It was only in 2012 that scientists finally agreed that nonhuman animals are conscious beings. Meanwhile, in the laboratory, we have only just discovered that dogs display immensely complex human-like emotions like jealousy, and we are only just deciphering how cows express positive emotions through the white of their eyes.

But what about insects? From monogamous termites to male-eating spiders, an ecologist explains. The Conversation organised a public question-and-answer session on Reddit in which James Gilbert, postdoctoral researcher at the University of Sussex, explained weird and stunning insect reproductive strategies. 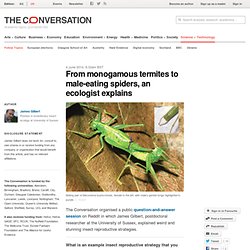 What is an example insect reproductive strategy that you would describe as especially ‘creative’? I use the word “creative” because that’s precisely what some of the strategies evoke to me. However, I must stress that it is evolution being “creative” here – I’m not trying to claim that the individual male is being “creative” or even evaluating what he is doing. The amazing 'Harry Potter' golden beetle that looks just like a Quidditch snitch. Golden tortoise beetle can change colour and even its reflectivityPicture taken in Mungood, India - where the beetles were commonly caught by schoolchildren intrigued by their colours By Mark Prigg Published: 11:10 GMT, 19 February 2013 | Updated: 07:55 GMT, 22 February 2013 At first glance, it looks uncannily like the flying golden snitch that Harry Potter chased while playing quidditch - but in fact these amazing images show a unique colour-changing beetle. 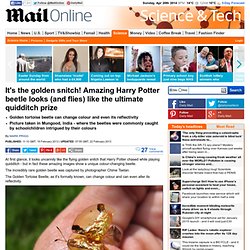 The incredibly rare golden beetle was captured by photographer Chime Tsetan. The Nightmarish Detail of New 3D Insect Images - Adrienne LaFrance. They offer clearer views than even microscopes can. 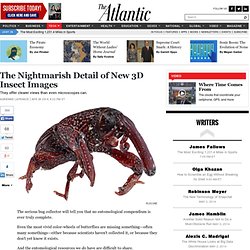 The serious bug collector will tell you that no entomological compendium is ever truly complete. Even the most vivid color-wheels of butterflies are missing something—often many somethings—either because scientists haven't collected it, or because they don't yet know it exists. And the entomological resources we do have are difficult to share. Bugs are often delicate and tiny. Most photographs fail to capture essential qualities like the iridescence of a cellophane-thin wing. X-rays are good for mapping an insect's core structure, but not for capturing surface-level details like the insect's color. But researchers at Australia's national science agency think they may have a solution. The plan, outlined in a Plos One paper published this month, was developed for the Australian National Insect Collection.

Why are these caterpillars climbing over each other? The surprising science behind the swarm. Imagine you’re deep in the Amazon rainforest, and you come across this.. thing. 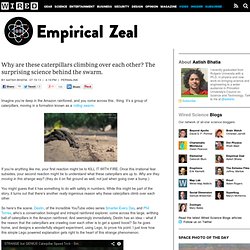 It’s a group of caterpillars, moving in a formation known as a rolling swarm. If you’re anything like me, your first reaction might be to KILL IT WITH FIRE. Once this irrational fear subsides, your second reaction might be to understand what these caterpillars are up to. Why are they moving in this strange way? (they do it on flat ground as well, not just when going over a bump.) Moth displays the ultimate deterrent after evolving camouflage on its wings that looks like a SPIDER. By Anna Edwards PUBLISHED: 12:00 GMT, 1 June 2013 | UPDATED: 12:01 GMT, 1 June 2013 It has wings lighter than a feather and is one of the most delicate creatures on earth. But this tiny moth can frighten off predators far bigger then itself - with its scary spider-like markings. The Lygodium Spider Moth knows how to stand up for itself by using intricate patterns that mimic the shape of a spider - deterring potential predators from attacking it.

The fascinating and unpredictable world of 'alien' creepy crawlies as you've never seen them before, unveiled by Sir David Attenborough. Never-before-seen footage of Emerald Cockroach Wasps, Goliath Beetles, Ogre-Faced Spiders and Tramp Ants captured in 3D on location in Africa and AustraliaFilm crews used macrophotography to make the tiny insects appear larger than lifeOne sequence shows a wasp in flight stinging a cockroach that took 10 hours to fully captureDuring studio filming cockroaches were cooled down in a fridge because they moved so fast the cameras couldn't keep upMicro Monsters 3D is Sir David's latest documentary exploring untouched parts of the natural world By Victoria Woollaston Published: 12:02 GMT, 14 June 2013 | Updated: 18:01 GMT, 26 June 2013 From ferocious scorpions with paralysing stings, beetles shooting boiling chemicals and assassin bugs that clothe themselves in their victims’ corpses, there is a whole world few of us know anything about. 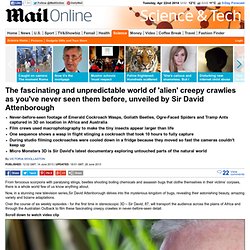 Scroll down to watch video clip One of the stars of Micro Monsters 3D is the African Goliath Beetle. The male grasps the female’s pincers and 'kisses' her. Spider webs found to attract insects by pulling them in using electric charge created by their flapping wings. An Illustrated Tour Of Australia's Museum of Copulatory Organs. The astonishing fake spider - built as a decoy by another spider: How amazing Amazonian arachnid avoids attack. Apparent new species found in a floodplain in the Peruvian AmazonEntomologists say they have seen nothing like it beforeFinder now plans to return and collect samples specimens for proper study. 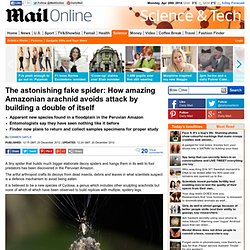 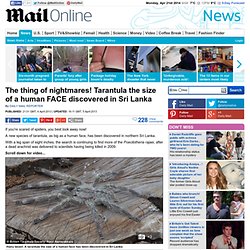 A new species of tarantula, as big as a human face, has been discovered in northern Sri Lanka. With a leg span of eight inches, the search is continuing to find more of the Poecilotheria rajaei, after a dead arachnid was delivered to scientists having being killed in 2009. Peacock spiders (Maratus volans): Rare photos of stunning tiny peacock spiders found in south-east Australia.

There are 20 known species of peacock spider but only eight have been formally identifiedPeacock spiders are so small you could fit ten of them on a fingernailThey are found in Queensland and New South Wales in Australia By Daily Mail Reporter Published: 16:16 GMT, 17 January 2013 | Updated: 18:02 GMT, 17 January 2013 These dramatic-looking spiders may seem like they're getting ready to attack, but this colourful display from male peacock spiders is in fact a mating ritual. 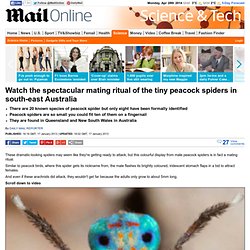 Similar to peacock birds, where this spider gets its nickname from, the male flashes its brightly coloured, iridescent stomach flaps in a bid to attract females. The incredible giraffe weevil that uses its neck as a weaponRead more: incredible giraffe weevil. The long, articulated neck is used by males to fight for matesNative only to Madagascar and their conservation status is as yet unknown By Daily Mail Reporter Published: 11:18 GMT, 5 October 2012 | Updated: 11:34 GMT, 5 October 2012 With its bizarrely articulated long neck, this odd-looking creature almost looks like something out of the twisted imagination of Alien creator H.R. Giger. But it is actually a real insect, native to Madagascar, and it is known as a giraffe weevil. From its long legs to smaller body the unusual shaped critter is a surreal echo of its much larger namesake. Unbe-weevil-ble: The incredible giraffe weevil of Madagascar which, with it's long articulated neck, looks almost like something from the imagination of Swiss surrealist painter H.R.

Peering about: Unlike the giraffe the bug's neck is not to help it reach for food but is for aggressive combat with other giraffe weevils to win over a female 'And this is the strangest insect I have ever seen. The king is back: Bizarre bug found with the face of Elvis on its back. Holidaymaker spotted the astonishing bug in ThailandAstonishing insect has previously been spotted in Singapore - where it was likened to a Sesame Street character By Mark Prigg Updated: 15:13 GMT, 27 September 2012 A photographer was left 'all shook up' after spotting the face of Elvis on the back of a bug.

With markings on its back resembling human eyes, nose, mouth and a pompadour hairdo, the unusual stink bug bears an uncanny resemblance to the King of rock 'n' roll. The sinister looking cockroach that goes from creepy crawly to just downright creepy underneath fluorescent light. Closely resembles cartoon robot designed by Apple's Sir Jonathan IveInsect can light itself up to scare away predators By Damien Gayle Published: 07:52 GMT, 24 August 2012 | Updated: 14:05 GMT, 24 August 2012 With it's unnerving pumpkin head-like face-shaped marking on the top of its head, this roach looks creepy enough. But shine a fluorescent light on the creepy crawly, and it looks more sinister still.

How Does A Caterpillar Turn Into a Butterfly? Are you looking at me? Scientists discover bizarre flatworm with 60 eyes. Flatworm is completely new speciesDiscovered in grassland near CambridgeBelieved to be of Antipodean descent. A little too close for comfort: The weird and wonderful world of insects pictured in a series of stunning super-magnified snaps. Nephilengys malabarensis spider loses its penis during sex to make it more fierce in battle against love rivals. The Antlas: Scientists travel the world imaging every species of ant in amazingly detailed 3D for online database. 'Prime suspect' in bee colony deaths is found - a parasitic mite that spreads viruses while feeding on the insects' 'blood' Secrets of cockroaches 'disappearing act' revealed - creatures swing underneath ledges when we see them 'vanish'

Creatures run away at speeds up to 200mph to scaleHind legs grab on to surface, swing round, then run away upside down'Trick' works thanks to tiny hairs on legs. Odor Processing Function of Fly Resembles Mammalian Brain. In an effort to better understand why fruit flies are immediately attracted to our food, a team of scientists developed a device, called Flywalk, to measure the response of insects to odor signals. Researchers discovered males and females of the same species were attracted to different odors and that their brain function, when determining between “good” and “bad” odors, resembled that of a mammalian brain.

Bees can overwhelm huge hornets by COOKING them inside huge ball of bodies.