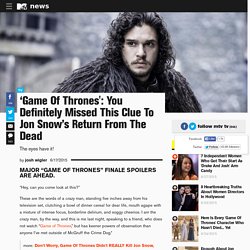 These are the words of a crazy man, standing five inches away from his television set, clutching a bowl of dinner cereal for dear life, mouth agape with a mixture of intense focus, borderline delirium, and soggy cheerios. I am the crazy man, by the way, and this is me last night, speaking to a friend, who does not watch “Game of Thrones,” but has keener powers of observation than anyone I’ve met outside of McGruff the Crime Dog.* I’m asking for her help because I need to look at what I’m watching.

The morning after the season five finale’s brutal cliffhanger ending, in which Jon Snow is betrayed and murdered by his fellow members of the Night’s Watch, I wrote about the many reasons why Jon simply cannot be dead. But what if it isn’t known? If Jon Snow is dead, I have some late stage grieving in my future next year. At Chris’ urging, I rolled the tape, and rolled it again, and rolled it some more. 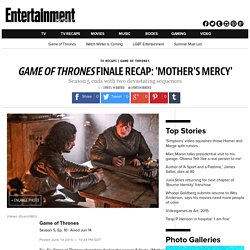 Six Game of Thrones characters died in the season 5 finale, “Mother’s Mercy.” And one of those deaths (maybe) marks the show’s greatest character loss yet (we felt every gut stab). Oh, and Arya’s blind. Shrieen is still dead. Cersei just totally redefined a term for walking home after a hookup. There is so much more. There is much to discuss. Stannis’ Camp: Snow is melting, it initially appears that last week’s sacrifice has worked.

Stannis then finds his wife Selyse hanged from a tree. How will Melisandre explain this to Stannis? And why didn’t it work, anyway? So, with Stannis’ child dead, his wife dead, his lover having dumped him, and his Tinder app not showing any potential new matches in the area (Osha? 'Game of Thrones' team on that fatal Jaime twist. The Game of Thrones season 5 finale was so packed with major upheavals and shocking deaths that perhaps the most crucial moment of all may have been largely overlooked: The tragic death of Myrcella Baratheon, Cersie and Jaimie’s daughter, poisoned by Prince Oberyn’s lover Ellaria Sand with a fatal kiss. 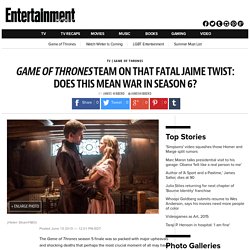 We asked showrunners Dan Weiss and David Benioff whether this will constitute an act of war by Dorne against the Lannisters. “It’s an act of war by the person who perpetrated it,” Weiss said. “But I don’t think Cersei is going to be particularly interested in whose fault it was that this happened to her daughter—it happened in Dorne. She might be in a more bellicose frame of mind than usual when she finds out.” Actor Nikolaj Coster-Waldau—who notes he doesn’t have any idea what’s to come next season—speculated that Jaime is going to have a pretty tough time explaining this one to his beloved sister. “Cersei has someone she could enact revenge on—Trystane,” Coster-Waldu said. Game of Thrones: Gwendoline Christie on her deadly finale fight. Game of Thrones: Maisie Williams reveals her season 6 concern.

Fans have been warning Maisie Williams about her season 5 finale twist for years [finale spoiler alert]. 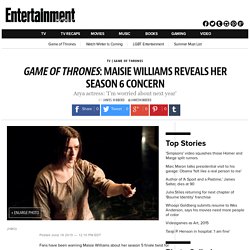 “Somebody on the street will go, ‘Oh, you’re going blind,’” the Game of Thrones actress told EW. “And I wanted to keep them guessing. I love keeping everything a surprise. So I’m always like, ‘Am I? Oh my God! And now that Arya Stark has indeed lost her vision as an apparent punishment by Jaqen H’ghar and The House of Black and White for her murderous rebelliousness, Williams is fretting about what this means for next season. Williams isn’t alone in feeling that anxiety. Game Of Thrones' Lena Headey nude body double was Rebecca Van Cleave. By Kate Thomas for MailOnline Published: 19:47 GMT, 18 June 2015 | Updated: 21:29 GMT, 18 June 2015. 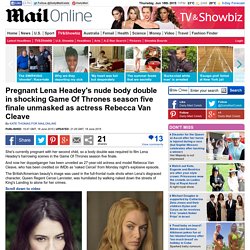 Game of Thrones's Lena Headey nude walk of shame was filmed by body double. By Shyam Dodge for MailOnline Published: 20:31 GMT, 15 June 2015 | Updated: 06:38 GMT, 16 June 2015 Lena Headey used a body double to film her most brutal (and nude) scene on the season five finale of Game Of Thrones. 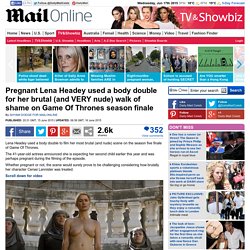 The 41-year-old actress announced she is expecting her second child earlier this year and was perhaps pregnant during the filming of the episode. Whether pregnant or not, the scene would surely prove to be challenging considering how brutally her character Cersei Lannister was treated. Cersei Lannister used a body double for her naked walk of shame. Warning: This post contains spoilers from the Season 5 finale of Game of Thrones as well as graphic images. 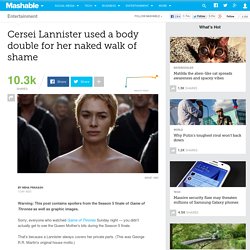 Sorry, everyone who watched Game of Thrones Sunday night — you didn't actually get to see the Queen Mother's bits during the Season 5 finale. That's because a Lannister always covers her private parts. (This was George R.R. Game Of Thrones kills off a host of main characters in season finale. By Ross Mcdonagh For Dailymail.com Published: 05:24 GMT, 15 June 2015 | Updated: 20:33 GMT, 15 June 2015 All Men must die - even Jon Snow. 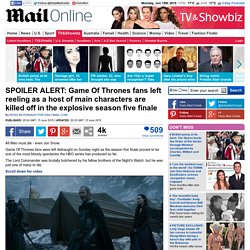 Game Of Thrones fans were left distraught on Sunday night as the season five finale proved to be one of the most bloody spectacles the HBO series has produced so far. The Lord Commander was brutally butchered by his fellow brothers of the Night's Watch, but he was just one of many to die. Scroll down for video Preparing for war: The episode begins at Stannis Baratheon's camp, where Melisandre claims the snows thanks to the Lord of Light Viewers had already been reeling at the sight of Cersei Lannister moments earlier being shorn and stripped completely naked, before being forced to march through the streets of King's Landing in front of a baying mob. The explosive season five finale jumped from one shocking scene to the next, also seing Stannis Baratheon executed at the hands of Brienne of Tarth, just hours after his wife Queen Selyse hanged herself. 'Game of Thrones' vs. the books: Why the TV version just won.

Warning: This post contains spoilers for everything up to and including Season 5, episode 2 of Game of Thrones as well as for the book series. 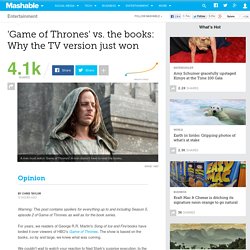 For years, we readers of George R.R. Martin's Song of Ice and Fire books have lorded it over viewers of HBO's Game of Thrones. The show is based on the books, so by and large, we knew what was coming. We couldn't wait to watch your reaction to Ned Stark's surprise execution, to the battle of the Blackwater, to the Red Wedding, to Joffrey's poisoning or the Red Viper's eye-opening defeat. In our heightened anticipation, we may even have let a spoiler or two slip here and there. But TV-only fans, you get to lord it over us book readers now. So far, one character has died in the show instead of being improbably saved and sent off on an unlikely quest; another has discovered the target of her quest instead of wandering aimlessly; another got elected to a new role in a far more believable fashion.