Miscarriage: 7 myths busted. There's still a stigma around miscarriage - even though its estimated that, among women who know they're pregnant, one in six of pregnancies will end this way. 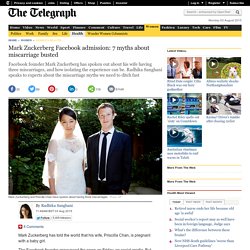 It’s why we’ve spoken to experts and put together a myth buster to answer any questions that women, or their partners, have around miscarriage - and to help us ditch some common misconceptions around it. Fast. 1) Women can cause miscarriages through stress Earlier this year, an online study published in the Obstetrics and Gynecology journal found that a large number of women have the wrong ideas about what causes miscarriages, which leads to unnecessary feelings of guilt and shame. But the NHS website clearly states that an increased risk of miscarriage is not linked to “a mother's emotional state during pregnancy, such as being stressed or depressed.” Elizabeth Duff, senior policy advisor at the UK’s largest charity for parents, the NCT, adds: “There’s very little evidence of anything like that. . • Sex, wine or stress? This is what happens to internal organs during a pregnancy. How we make immune cells that keep the body from attacking itself.

One of the primary tasks of the immune system is to distinguish self from non-self. 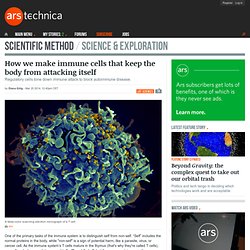 “Self” includes the normal proteins in the body, while "non-self" is a sign of potential harm, like a parasite, virus, or cancer cell. As the immune system’s T cells mature in the thymus (that's why they're called T cells), any cells unlucky enough to respond to "self" are killed off, lest they cause autoimmune diseases. This process is known as negative selection.

Like most biological processes, though, negative selection is not foolproof; not every autoreactive T cell ends up dying. To catch them, the body produces Treg (for T regulatory) cells, which provide another safeguard against autoimmunity. All T cells express a receptor (creatively called the TCR, for T cell receptor) that helps them identify cells that are infected or defective. But the new work shows that T cells with very high-affinity receptors—those that are extremely sensitive to the proteins they recognize—actually survive.

New Insight on Mitotic Spindle Architecture. Using laser ablation to slice through microtubules in the mitotic spindle, researchers have developed a clearer picture of how cell division occurs. 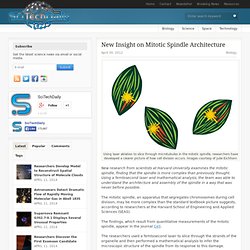 Images courtesy of Julie Eichhorn New research from scientists at Harvard University examines the mitotic spindle, finding that the spindle is more complex than previously thought. Using a femtosecond laser and mathematical analysis, the team was able to understand the architecture and assembly of the spindle in a way that was never before possible. The mitotic spindle, an apparatus that segregates chromosomes during cell division, may be more complex than the standard textbook picture suggests, according to researchers at the Harvard School of Engineering and Applied Sciences (SEAS). The findings, which result from quantitative measurements of the mitotic spindle, appear in the journal Cell. Building The Body Electric. Hormel Institute study makes key finding in stem cell self-renewal. A University of Minnesota-led research team has proposed a mechanism for the control of whether embryonic stem cells continue to proliferate and stay stem cells, or differentiate into adult cells like brain, liver or skin. 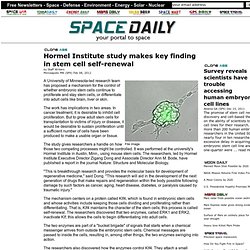 The work has implications in two areas. In cancer treatment, it is desirable to inhibit cell proliferation. Life is sweet: New clue to our chemical origins as sugar molecules found in DNA are recreated by scientists. By Nick Enoch Updated: 08:03 GMT, 27 January 2012 Organic chemists at the University of York have recreated a pair of simple sugars - threose and erythrose - in a process which could have occurred before the advent of life Scientists are one step closer to understanding the origin of life after making a breakthrough into how sugar molecules found in DNA are created. 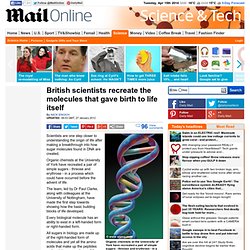 Organic chemists at the University of York have recreated a pair of simple sugars - threose and erythrose - in a process which could have occurred before the advent of life. The team, led by Dr Paul Clarke, along with colleagues at the University of Nottingham, have made the first step towards showing how the basic building blocks of life developed. Protein Tweak May Trigger Alzheimer’s. Scientists find 'miracle' stem cells stay alive for 17 days in corpses. Stem cells are touted as a future source to replenish damaged tissueResearchers find skeletal muscle stem cells can survive for 17 days in human and 16 days in miceThis is some two weeks more than the one or two days currently thought'Highly promising' research requires more testing and validation before it can be tested in humans By Graham Smith Published: 12:51 GMT, 13 June 2012 | Updated: 12:52 GMT, 13 June 2012 Some stem cells can lay dormant for more than two weeks in a dead person and then be revived to divide into new, functioning cells, scientists revealed yesterday. 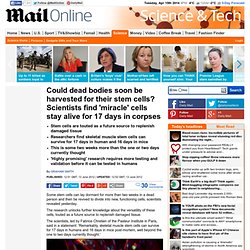 The research unlocks further knowledge about the versatility of these cells, touted as a future source to replenish damaged tissue. The beauty of genes: Scientists take stunning 'photographs' of human cells by making the DNA inside them GLOW. The structures were captured using a technique dubbed ‘Exchange-PAINT’DNA is attached to antibodies that recognise a specific cellular structureDNA with fluorescent tags are introduced and bind to partner structureThis is first time system has been able to take images less than 10nm apartImages like this could uncover new ways to diagnose disease, track its progress, or monitor the effectiveness of therapies at a cellular level By Ellie Zolfagharifard Published: 13:10 GMT, 6 February 2014 | Updated: 13:11 GMT, 6 February 2014 This hypnotic image is what the human body looks like when you break it down into its smallest parts. 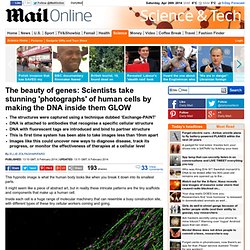