George Osborne's changes to business rates: Q&A. How big a change is this? 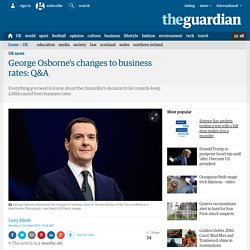 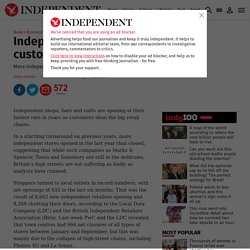 In a startling turnaround on previous years, more independent stores opened in the last year than closed, suggesting that while such companies as Marks & Spencer, Tesco and Sainsbury are still in the doldrums, Britain’s high streets are not suffering as badly as analysts have claimed. Shoppers turned to local outlets in record numbers, with net openings of 432 in the last six months. Independent shops bounce back as customers shun retail chains. Birmingham City University - Sign In. The UK is now a smartphone society. 06 August 2015 Smartphones overtake laptops as UK internet users’ number one deviceWe’re spending two hours online on our smartphones every day; twice as long as laptops and PCsSuperfast 4G is helping change the way we shop, bank, watch TV and communicate Smartphones have overtaken laptops as the most popular device for getting online, Ofcom research has revealed, with record ownership and use transforming the way we communicate. 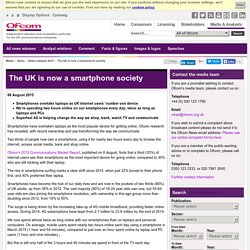 Two thirds of people now own a smartphone, using it for nearly two hours every day to browse the internet, access social media, bank and shop online. Ofcom’s 2015 Communications Market Report, published on 6 August, finds that a third (33%) of internet users see their smartphone as the most important device for going online, compared to 30% who are still sticking with their laptop. The rise in smartphone surfing marks a clear shift since 2014, when just 22% turned to their phone first, and 40% preferred their laptop. Gentrification pushing some of the poorest members of society out of their homes, says study.

The damaging impact of gentrification on some of the poorest people in the country has been highlighted by a new analysis of the latest official statistics on deprived areas in England. 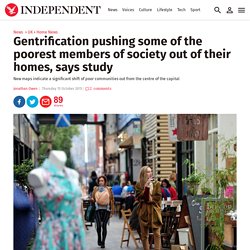 People living in the bottom ten per cent in terms of relative deprivation are being pushed out of their homes and communities, with a dramatic change in the demographics of London within the past decade. New maps produced by Dr Alasdair Rae, an expert on urban deprivation based at the University of Sheffield, indicate a significant shift of poor communities out from the centre of the capital. Based on data released by the Department of Communities and Local Government last month, they show how many inner city boroughs have seen a marked decrease in the number of areas classed as the least deprived in the past decade. 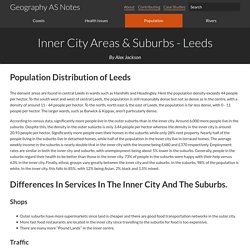 You should really enable it for this site but <i>most</i> things should work without it. </p></div> Population Distribution of Leeds. 10 Brands Doing an Amazing Job on Social Media. Zara Faces Sweatshop Allegations In Argentina. 04 April 2013 Ella Alexander ZARA has been accused of producing clothes in "degrading" Argentinian sweatshop conditions, following a new investigation. 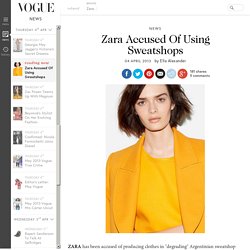 The mainly Bolivian employees said that they were made to work more than 13 hours a day and could not leave the factory without permission. The inquiry - conducted by Argentina's health and safety watchdog - focused on three factories, said to be supplying apparel to Zara Man, currently on sale in British stores. Many of the workers were immigrants and children, workers' rights group La Alameda said.

People at the factory were forced to start work at 7am and continue, without a break, until 11pm six days a week. "We found men and children who lived in places where they worked," said Juan Gomez Centurion, head of the country's health and safety watchdog. Zara Faces Sweatshop Allegations In Argentina. Birmingham City University - Sign In. Birmingham City University - Sign In. Breaking the chains on high streets: A movement for independent local loyalty cards plans to go nationwide. What started as a regional push to get people shopping locally is spreading across the country, armed with the latest weapons against the chain stores hogging the high street. 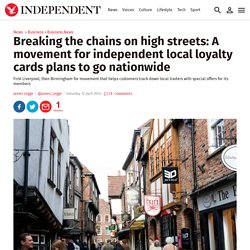 Independent shops have been badly hit by the financial crisis, with 18 stores closing every day last year across the UK's biggest town centres. Independent Birmingham's campaign to boost Brummie businesses. “There's such pride in this city and independents really champion that,” says Joe Schuppler as he sups coffee in Saint Kitchen. 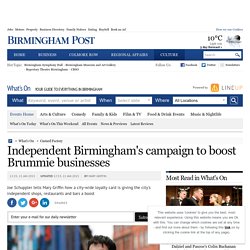 The Jewellery Quarter coffee shop is one of 60 cafes, restaurants, bars, pubs and shops that are being championed by his website, Independent Birmingham. Birmingham City University - Sign In. About Greenwashing. Everyone’s heard the expression “whitewashing” — it’s defined as “a coordinated attempt to hide unpleasant facts, especially in a political context.” 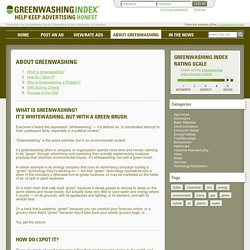 “Greenwashing” is the same premise, but in an environmental context. It’s greenwashing when a company or organization spends more time and money claiming to be “green” through advertising and marketing than actually implementing business practices that minimize environmental impact. Saving our high streets: telling a local story is the key. Look at government reports such as the Portas Review, magazine articles and blogs from architects and neighbourhood activists and you'll see the reflection of our love-hate relationship with a row of shops, whether they are located in one street or under one roof. 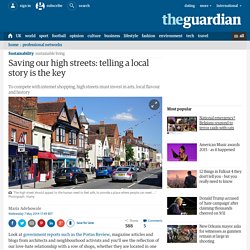 When I find myself in a high street, the Clash's Should I Stay comes to mind. I may need to buy something, but the sameness, the price and the general feeling that you could be in any town in the country makes me want to chuck the shopping list and head home. Talking to friends and colleagues, I know I'm not the only one. The high street experience is about what happens outside the shops possibly more than what happens inside them. Independent retailers plug high street gaps left by chain store exodus. Independent mobile phone shops, barbers, tailors and tattoo parlours are becoming the new linchpins of Britain's rapidly changing high streets as the exodus of chain stores continues. "As chains cut their links with high streets our towns are showing signs of reverting to older models of economic activity, where they serve the needs of physical customers in physical stores, alter their clothes, style their hair and mend their broken iPhones," said British Independent Retailers Association (BIRA) deputy chief executive Michael Weedon.

Despite the tough economic conditions the number of independents has risen every year since 2009 although the growth has tapered with each passing year. Collaboration could fuel rise of the independent retailer. Independent retailers have it tough with competition from chain stores, the rise of e-commerce, and reduced consumer spending power. But with a little help from friends, they can do more than simply get by. Tim Lewis believes small retailers are an important part of society and says it's important to see them thrive. He says they can do so through collaboration with others. Lewis helped found MyHigh.St, which is part of the online network target200 alongside the British Independent Retailers Association and Rakuten's Play.com, working with Action for Market Towns and the Association of Town and City Management.

It allows small retailers to come together to showcase their high street stores online. Seven reasons to shop locally. 'Sustainability': is it a dirty word? Can we save the independent high street? As more large retailers collapse, do independent stores face the same fate? Can the UK high street surivive without large chains? Yet at the bottom end of town – home to mainly chain stores and large retailers – it’s a different story. Four retail units have become empty and landlords are struggling to fill them. H&M's $1m recycling prize is clever but no solution to fast fashion. Faster fashion: ‘If a trend comes, we need to have it on our site in under a week’ UK high street has worst month since 2008. August turned out to be the worst month for Britain’s retailers since the financial crisis of 2008, a survey has shown, as poor weather and a spike in foreign holidays kept shoppers away from the high street.

Retail sales fell by 4.3% on the year before, according to the monthly high street sales tracker from accountancy firm BDO. This was the biggest drop since November 2008 and the sixth monthly fall this year. The John Lewis department store chain, seen as a barometer of the high street, reported a 3% drop in August sales year on year. Organic food back in vogue as sales increase. After years of falling sales, organic food is making a comeback. Supermarkets and food associations say that after a sustained decline, demand for organic fruit, vegetables and dairy produce is on the rise, as consumers become more willing to pay a premium for food produced to higher farming standards. Experts say that better product availability is helping to drive growth. A powerful organic marketing campaign, set up by growers and retailers, has also played a part. "Early indications show positive growth in the organic market in 2013, after around four years of decline – showing strong appetite among consumers for the environmental, animal welfare and health benefits of organic produce," said Bob Sexton, chief executive of certification at the Soil Association.