CONSHOHOCKEN, Pa., March 19, 2013 /PRNewswire/ CONSHOHOCKEN, Pa., March 19, 2013 /PRNewswire/ -- As we approach the March 20th celebration of National Proposal Day, David's Bridal, the nation's leading bridal and special occasion authority, gets to the heart of how newly engaged women will start planning their trip down the aisle. 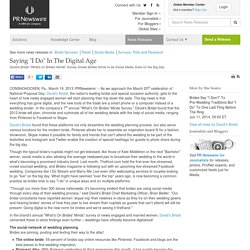 The big news is that everything has gone digital, and the new tools of the trade are a smart phone or a computer instead of a wedding binder. How luxury brands can target deep-pocketed brides. Courtesy of Oscar de la Renta With wedding season just around the corner, luxury marketers should start to prepare marketing efforts for high-end products, venues and services. 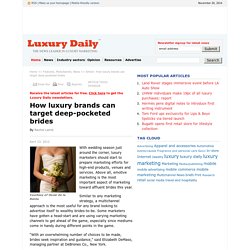 Above all, emotive marketing is the most important aspect of marketing toward affluent brides this year. Similar to any marketing strategy, a multichannel approach is the most useful for any brand looking to advertise itself to wealthy brides-to-be. Buyer Behaviour. In addition to understanding the needs of your customers, you also need to understand what motivates them to purchase, and how you can influence the buying process to ensure that your products or services are on the shopping list. 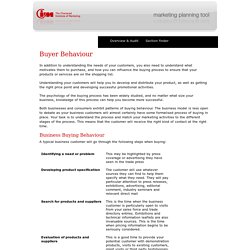 Understanding your customers will help you to develop and distribute your product, as well as getting the right price point and developing successful promotional activities. The psychology of the buying process has been widely studied, and no matter what size your business, knowledge of this process can help you become more successful. Both businesses and consumers exhibit patterns of buying behaviour. UK Couples Prefer a Traditional Wedding Theme : hitched W.I.F.E. When it comes to giving a wedding a theme, the choices and possibilities are endless; from quirky and colourful to a destination wedding theme and beyond. hitched.co.uk ran a recent survey to see which wedding theme was more popular — and with over a third of the votes (36.4%) a Traditional/Classic wedding theme was most popular! 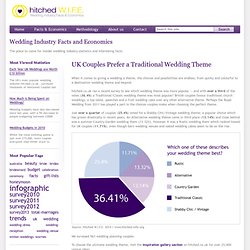 British couples favour traditional church weddings, a top table, speeches and a fruit wedding cake over any other alternative theme. Perhaps the Royal Wedding from 2011 has played a part in the choices couples make when choosing the perfect theme. Just over a quarter of couples (25.4%) voted for a Shabby Chic/Vintage wedding theme; a popular choice which has grown drastically in recent years. An Alternative wedding theme came in third place (13.14%) and close behind was a summer Country Garden wedding them (13.32%). We surveyed 563 wedding planning couples. Wedding-Album-Cover.jpg (JPEG Image, 1734 × 1156 pixels) - Scaled (59%) Home. Average Wedding Cost Budget Breakdown. Event Management Courses. 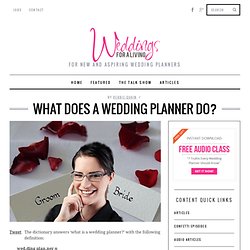 With the following definition: wed.ding plan.ner n 1. a person hired to plan and organize a wedding, reception and possibly the honeymoon in consultation with the bride and groom. wed.ding con.sul.tant n 1. someone who owns a wedding planning business. 2. one who gives expert or professional advice to couples planning a wedding, reception and/or honeymoon. Wedding Planning Professional Titles. Wedding planner: definition of wedding planner in Oxford dictionary. Weddings Gowns Gifts, The Knot. Bridal Trends for Spring 2015 from New York Bridal Week. Wedding Statistics for 2013. Although it's a somewhat dry topic for discussion today, the facts and figures presented below suggest that despite the recent difficulties attributed to the economic climate, the wedding industry remains extremely healthy and is continuing to go from strength to strength. 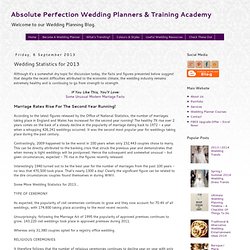 Marriage Rates Rise For The Second Year Running! According to the latest figures released by the Office of National Statistics, the number of marriages taking place in England and Wales has increased for the second year running! Inside the Designer Bridal Boom - BoF - The Business of Fashion. LONDON, United Kingdom — Greek-born designer Sophia Kokosalaki has been producing custom-order bridal gowns since her London atelier opened its doors in 2000. 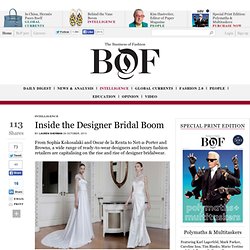 But it wasn’t until a chance meeting with Net-a-Porter founder Natalie Massenet in 2011 that Kokosalaki, who chose to step away from ready-to-wear that same year, thought an entire bridal line might be a worthy endeavour. Two years later, Net-a-Porter — which launched a dedicated online bridal boutique in 2009 — increased its buy of Kokosalaki’s bridal line by 67 percent. Wedding Industry Statistics – Brides American Wedding Study 2011. June 17, 2011 – New York, NY – BRIDES, the #1 brand in the world for reaching engaged women, has once again conducted the American Wedding Study, the quintessential analysis of spending and behaviors around wedding planning that provides key insights to the emerging and established trends surrounding this economically charged life phase. 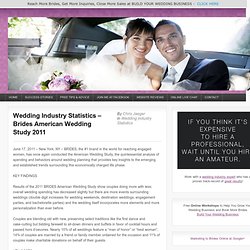 Results of the 2011 BRIDES American Wedding Study show couples doing more with less; overall wedding spending has decreased slightly but there are more events surrounding weddings (double digit increases for wedding weekends, destination weddings, engagement parties, and bachelorette parties) and the wedding itself incorporates more elements and more personalization than ever before. Couples are blending old with new, preserving select traditions like the first dance and cake-cutting but bidding farewell to sit-down dinners and buffets in favor of cocktail hours and passed hors d’oeuvres. 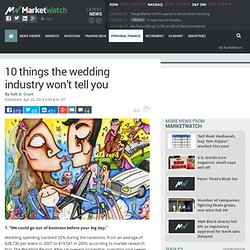 “We could go out of business before your big day.” Wedding spending tumbled 32% during the recession, from an average of $28,730 per event in 2007 to $19,581 in 2009, according to market research firm The Wedding Report. After recovering somewhat, spending now seems to be flattening out — in 2012, the average wedding cost $25,656, an increase of just $25, or less than one-tenth of 1%, over 2011. British Couples Stick to Wedding Traditions : hitched W.I.F.E. Over in the States some couples choose to have their wedding photographs taken with their bridal party before the wedding ceremony, but over in the UK we tend to like the old tradition of not seeing each other before walking down the aisle. 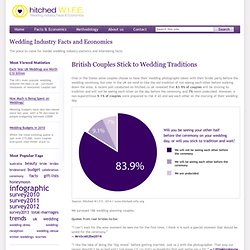 A recent poll conducted on hitched.co.uk revealed that 83.9% of couples will be sticking to tradition and will not be seeing each other on the day before the ceremony, and 7% were undecided. However, a non-superstitious 9.1% of couples were prepared to risk it all and see each other on the morning of their wedding day. We surveyed 186 wedding planning couples. How Much is Being Spent on Weddings? : hitched W.I.F.E. Each Year UK Weddings are Worth £10 billion : hitched W.I.F.E. Wedding Services in the US Market Research. Industry Analysis & Industry Trends During the past five years, many economic and consumer trends acted against the Wedding Services industry. 9 facts about marriages. Wedding Report 2014. Pressure to have fantasy wedding threatening marriage, warns Rowan Williams. Speaking during a debate organised by the law firm Winckworth Sherwood in London, the former Archbishop also warned of a crisis of identity among a generation of young men, which he said is threatening the stability of relationships.

And he also hit out at the growing culture of pre-nups, which he suggested was eroding the trust which should be the basis of a stable marriage. Lord Williams, who took over as master of Magdalene College Cambridge after stepping down as Archbishop last year, joined an expert panel to debate the role of “love or law” in marriage. He said that despite rapid social changes, including the growth of cohabitation, marriage is still highly valued as the ultimate “public affirmation of commitment”. The ever changing wedding industry The UK Alliance of Wedding Planners - The leading industry body for the UK Wedding Planning Market.

Associate member Isabel Smith of Isabel Smith Wedding Design , was contacted recently by someone studying events management and asked if she might be able to answer a few questions to assist with her dissertation. We thought the questions asked (and the answers she gave), might be of interest. So, here’s how it went: The Reinvented Wedding - Smaller and Cheaper. Tatyana Lapson and her husband, Michael, had their ceremony in a beer garden in Queens. So when the time came to do it again, Ms. Philippa, 47, a former restaurant owner, author of “Ruby’s Juke Joint Americana Cookbook” and lead singer in the rockabilly band Ruby Dee and the Snakehandlers, went in the other direction. Average wedding now costs more than £18,000. Costs are hitting 25 to 34 year-olds the hardest with one-in-five (20 per cent) having to choose between a wedding or getting that first leg up on the property ladder.

A third (33 per cent) admitted getting into debt to pay for their wedding, while 23 per cent put off getting married due to their strained finances. Almost one in five (18 per cent) blame the pressure to "keep up with the Jones" as the main reason for wedding costs snowballing, whilst a third (33 per cent) put it down to their ever-expanding guest list. Pressure to host a free bar has caused 16 per cent of newlyweds' finances to get out of control, and 19 per cent felt obliged to kit out their bridal party with full regalia even though they could not afford it. And 24 per cent of those polled thought they were overcharged by wedding suppliers with 20 per cent admitting they booked venues or caterers and later regretted it, due to the cost. Average Wedding Cost Budget Breakdown. Wedding Bells, And Cash Registers, Ring In China. Boden: 'Superbrides'