Backgammon Tutorial. Chicago Point Online Backgammon Links. Sydney Backgammon - Home Page. Dice roll probabilities in backgammon. In a nutshell: Your chances of getting back from the bar are better than they look. 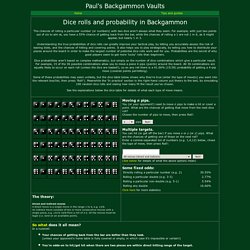 (unless your opponent's home table is fully covered or empty, in which case it's impossible or certain!) You're odds-on to hit/get hit when there are two pieces are within direct hitting range of the target. You're extremely likely to hit/get hit when there are three or more pieces within direct hitting range. By spreading pieces out across your outfield (points 7 to 12), you greatly increase your chances of making points in your home table. The positions you leave your pieces in after each move influence two sets of probabilities: The likelihood of your opponent being able to hit or outmanoeuvre you on his next dice roll. Here are examples of how you'd use the probabilities shown in this page in a game. Moving n pips This is the simplest (and arguably most important) set of percentages to remember - what are the chances of being able to make a move of n pips (points) on the next dice roll?

Becoming a Better Player, by Hank Youngerman. Let's start with a multiple-choice quiz: Should Blue double? 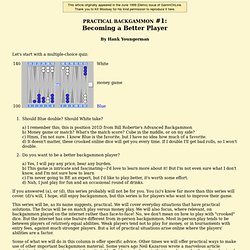 Should White take? A) I remember this; this is position 201D from Bill Robertie's Advanced Backgammon b) Money game or match? What's the match score? Cube in the middle, or on my side? C) Hmm, I'm not sure. If you answered (a), or (d), this series probably will not be for you. This series will be, as its name suggests, practical. Some of what we will do in this column is offer specific advice. To kick off the series, I want to offer my thoughts on the tools that an intermediate player needs to be able to compete with the big boys—and what you don't need. What you need: An understanding of basic probabilities and the willingness to make use of them. What you don't need: A photographic memory. Next Article: Basic Probabilities, Dice, and the Doubling Cube. 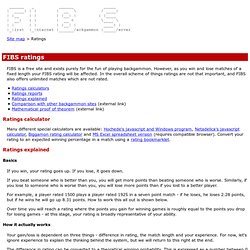 However, as you win and lose matches of a fixed length your FIBS rating will be affected. In the overall scheme of things ratings are not that important, and FIBS also offers unlimited matches which are not rated. Ratings calculator Many different special calculators are available: Hochede's javascript and Windows program, Netadelica's javascript calculator, Biggamon rating calculator and MS Excel spreadsheet version (requires compatible browser).

Ratings explained Basics If you win, your rating goes up. If you beat someone who is better than you, you will get more points than beating someone who is worse. How it actually works The difference in rating can be converted to a theoretical winning probability. /p/659/BlackBerry/Backgammon-for-BlackBerry/#product_reviews. GammOnLine. Discussions - rec.games.backgammon. FIBS for Blackberry Bold. Backgammon Software. Sydney Backgammon - FIBS Tournament rules. These tournament rules have been developed by David Escoffery (david@escoffery.com) and are used with his kind permission. 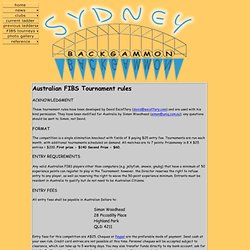 They have been modified for Australia by Simon Woodhead (simon@uniq.com.au); any questions should be sent to Simon, not David. The competition is a single elimination knockout with fields of 8 paying $25 entry fee. Tournaments are run each month, with additional tournaments scheduled on demand. All matches are to 7 points. Prizemoney is 8 X $25 entries = $200. Any valid Australian FIBS players other than computers (e.g. jellyfish, snowie, gnubg) that have a minimum of 50 experience points can register to play in the Tournament; however, the Director reserves the right to refuse entry to any player, as well as reserving the right to waive the 50-point experience minimum.

All entry fees shall be payable in Australian Dollars to: Entry fees for this competition are A$25. 100 percent of all the collected entry fees will be returned to the winners of the tournaments. Backgammon Resource.