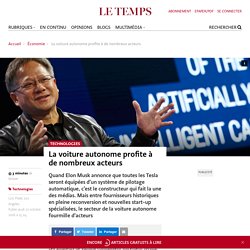 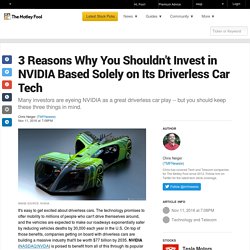 It's easy to get excited about driverless cars. The technology promises to offer mobility to millions of people who can't drive themselves around, and the vehicles are expected to make our roadways exponentially safer by reducing vehicles deaths by 30,000 each year in the U.S. On top of those benefits, companies getting on board with driverless cars are building a massive industry that'll be worth $77 billion by 2035. NVIDIA (NASDAQ:NVDA) is poised to benefit from all of this through its popular Drive PX 2 semi-autonomous driving platform, and its GPUs that can turn camera images into actionable information for self-driving systems. But investors looking to jump into NVIDIA's stock based on just the company's opportunities in the driverless car market should keep these three things in mind: 1. But investors may remember that just four months ago it was Mobileye's (NYSE:MBLY) technology that was helping to bring about Tesla's driverless car future. 2.

iCar release date rumours. Why self-driving cars won't put all Uber drivers out of a job - Roadshow. At first glance, Uber has what seem like dramatically opposing goals: in the short term, to get more people driving for the company -- and in the long term, to replace human drivers with robots. 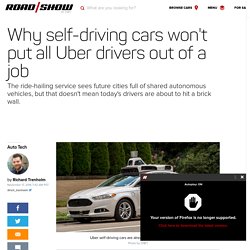 But Uber's Guy Levin, who spoke Thursday at an industry event in London, said that self-driving cars won't completely replace people. "We don't think there'll be mass ownership of individual self-driving cars," said Levin, a senior analyst in Uber's public policy group for Europe. Instead, people in cities will have shared access to fleets of autonomous vehicles. That leaves room for drivers to provide transportation outside urban areas. Interest and research in self-driving cars continues to climb in the auto and tech industries. Levin pointed out that you don't need to drive a car to work for Uber. "In a world in which Uber has self-driving fleets in cities, they'll be much bigger than they are today," he said.

And if required, "there'll still be some cases where you want a human driver. " Can Samsung cruise to top of auto-tech industry with $8B Harman buy? SEOUL — Samsung Electronics' $8 billion acquisition of the US auto electronics company Harman will instantly transform the South Korean tech company into a major player in the highly competitive and rapidly growing market for auto infotainment, software, and connected car technology. 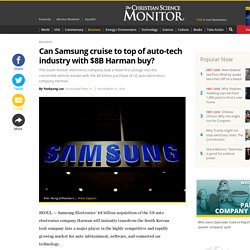 Samsung announced Monday that it would pay $112.00 per share in cash for the Stamford, Conn., company. It's Samsung's largest acquisition by far and it will put the company in a strong position as the race to develop autonomous vehicles barrels forward. Harman International Industries Inc. is already is a $7 billion-in-sales per year player in the automotive market. It makes touch screens that control vehicle functions and infotainment systems, and it's dominant in automotive sound systems with brands such as Harman Kardon, JBL, Infinity, and Mark Levinson. In recent years Harman has used acquisitions to move into over-the-internet software updates and cyber security. "An M&A deal this big is a first for us. Intel Courts Auto Industry as Battle Brews to Provide Autonomous-Car Computing Power. 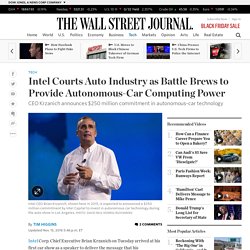 Chief Executive Brian Krzanich on Tuesday arrived at his first car show as a speaker to deliver the message that his semiconductor company’s computing muscle and big-data prowess are just what auto makers need as they prepare for vehicles that can drive themselves. In his speech at the annual Los Angeles car show, he announced a $250 million commitment by Intel Capital to invest in autonomous-car technology during the next two years.