Biography of Katsuhiro Otomo (大友克洋) July 16, 1988 is the day most Western fans of Japanese anime recall as the day that put this modern art form on the global map. 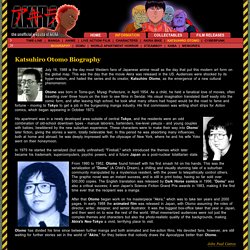 This was the day that the movie Akira was released in the US. Audiences were shocked by its hyper-realism, and hailed the series and its creator, Katsuhiro Otomo, as the emergence of a new cultural phenomenon. Otomo was born in Tome-gun, Miyagi Prefecture, in April 1954. As a child, he held a fanatical love of movies, often travelling over three hours on the train to see films in Sendai.

His visual imagination translated itself easily into the comic form, and after leaving high school, he took what many others had hoped would be the road to fame and fortune - moving to Tokyo to get a job in the burgeoning manga industry. In 1979 he started the serialized (but sadly unfinished) "Fireball," which introduced the themes which later became his trademark; supercomputers, psychic powers, and a future Japan as a post-nuclear totalitarian state. John Paul Catton Landmark. Grand Prix d’Angoulême 2014 : et si c’était Katsuhiro Otomo ? BoDoï dresse le portrait des trois finalistes pour le Grand Prix 2014 du Festival international de la bande dessinée d’Angoulême. 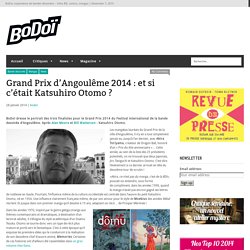 Otomo: les maîtres de la BD qui l'ont influencé. Started From AKIRA Now We Here: Katsuhiro Otomo's Affect On Comics And Film - This Is Infamous. The camera opens on an aerial shot of a Japanese highway. 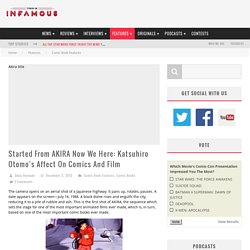 It pans up, rotates, pauses. A date appears on the screen—July 16, 1988. A black dome rises and engulfs the city, reducing it to a pile of rubble and ash. This is the first shot of AKIRA, the sequence which sets the stage for one of the most important animated films ever made, which is, in turn, based on one of the most important comic books ever made. Katsuhiro Otomo · Interview. Japanese director Katsuhiro Otomo began his career as a manga artist, writing and drawing series like Fireball and Domu in the late '70s and early '80s before moving on to the staggeringly ambitious, 2,000-plus-page series Akira, which followed two young biker-punks in a muddled future dystopia. 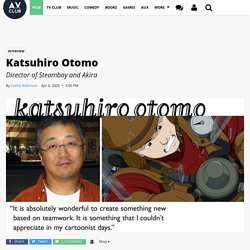 When Otomo directed a feature adaptation of Akira in 1988, it became the most expensive animated movie ever produced in Japan, and also one of the most visually impressive: It inspired a generation of Japanese viewers to become animators, and as one of the first anime films to play in American theaters and to gain mainstream critical support, it remains the seminal anime film for many older American fans. A conversation between Katsuhiro Otomo and Takehiko Inoue. Men’s culture magazine Brutus did a special issue on Katsuhiro Otomo back in April 2012, when Otomo was doing his giant exhibition where he displayed the original handdrawn pictures of every page of Akira. 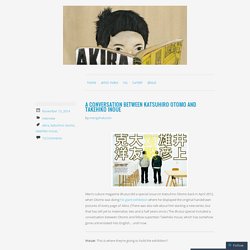 (There was also talk about him starting a new series, but that has still yet to materialize, two and a half years since.) The Brutus special included a conversation between Otomo and fellow supertitan Takehiko Inoue, which has somehow gone untranslated into English… until now. Inoue: This is where they’re going to hold the exhibition? Otomo: This is it. I thought it was too big at first, but I found that once you set everything up it’ll actually get pretty full. Inoue: So if you’re doing this exhibit with Akira in its entirety, how many pages does that work out to? Naoki Urasawa and Hisashi Eguchi talk about manga in the 70s and 80s, mostly Otomo. Two artists in conversation today about manga in the 70s and 80s. 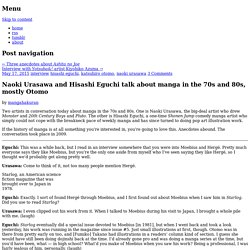 One is Naoki Urasawa, the big-deal artist who drew Monster and 20th Century Boys and Pluto. The other is Hisashi Eguchi, a one-time Shonen Jump comedy manga artist who simply could not cope with the breakneck pace of weekly manga and has since turned to doing pop art illustration work. If the history of manga is at all something you’re interested in, you’re going to love this. 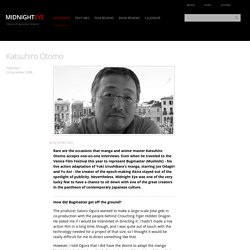 Even when he traveled to the Venice Film Festival this year to represent Bugmaster (Mushishi) - his live action adaptation of Yuki Urushibara's manga, starring Joe Odagiri and Yu Aoi - the creator of the epoch-making Akira stayed out of the spotlight of publicity. Nevertheless, Midnight Eye was one of the very lucky few to have a chance to sit down with one of the great creators in the pantheon of contemporary Japanese culture. How did Bugmaster get off the ground? The producer Satoru Ogura wanted to make a large-scale jidai geki in co-production with the people behind Crouching Tiger Hidden Dragon. He asked me if I would be interested in directing it. However, I told Ogura that I did have the desire to adapt the manga Mushishi, which is also a kind of period piece. 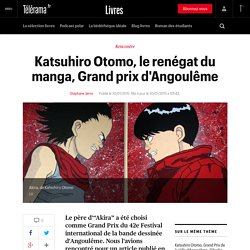