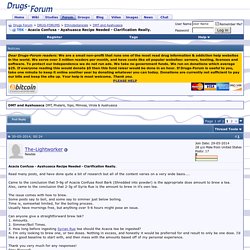 Hey Lightworker, I have a pretty straightforward recipe that I have used with success multiple times. You are correct about the dosages by the way, I use the same dose. 5 grams of acacia and 3 grams of Syrian Rue should be a good first time dose. So what you are going to want to do is simmer, just below boiling, your Acacia 3 times, for 30 minutes each time, stirring frequently. At the end of each boil, let the pot sit for ten minutes undisturbed to allow the powder to sink to the bottom of the pot/container.

Gently and carefully poor as much of the liquid you can into another pot without transferring the resting powder. When the final boil is complete, filter the mixture through a t-shirt, you can use other material, and discard the powder. Take the egg whites from 1-2 eggs and place them in any bowl/container. TEK - Acacia Confusa - Ayahuasca Recipe Needed - Clarification Really. FAQ - DMT Frequently Asked Questions and Troubleshooting Guide. DMT overview What is DMT, Where do I learn the basics? 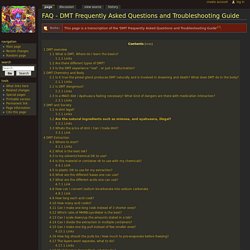 DMT is a naturally occuring substance, present in trace amounts in normal human metabolism (and its purpouse is still relatively unknown, check question 2.1 , as well as in a variety of plants and animals. It can be extracted from some of these plants and smoked for some very strong psychedelic/entheogenic effects lasting 10 minutes. It can also be taken orally, but we have an enzyme (MAO) in our stomach that destroys dmt if taken orally, so for taking orally DMT must be acompanied by a substance that inhibits this enzyme (MAOI, or MAO Inhibitor), which is also present in some other plants.

Ayahuasca, a sacred drink used by indigenous people of the Amazon, is an example of a drink usually made with a dmt-containing plant (Psychotria viridis), together with a MAOI containing plant (Banisteriopsis caapi), that is drank orally for a psychedelic/entheogenic experience lasting around 4 hours. Links. Pharmacological and therapeutic effects of Peganum harmala and its main alkaloids.

Acrb-shop - home page. Acacia confusa Changa..! - DMT Discussion. Well, Lemon Balm is a nice herbal relaxant, people can make tea with it, it has some good properties it seems for sure. 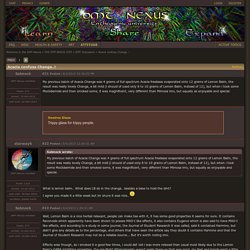 It contains flavonoids which apparently have been shown to posses MAO-I like effects, it also contains Eugenol which is also said to have MAO-I like effects, and according to a study in some journal, the Journal of Student Research it was called, said it contained Harmine, but didn't give any details as to the percentage, and others that have seen the article say they doubt it contains Harmine and that the Journal of Student Research may not be a reliable source... But it's worth noting imo. The Art of Changa, a guide to making the perfect blends. - Changa.

Changa You've heard the word but perhaps don't know what all the hub-bub's about. 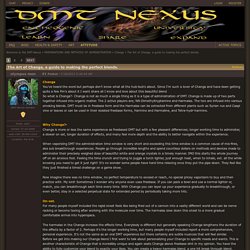 Since I'm such a lover of Changa and have been getting quite a few Pm's about it I want share all I know and love about this beautiful blendSo what is Changa? - Changa is not as much a single thing as it is a type of administration of DMT. Changa is made up of two parts together infused into organic matter. The 2 active players are; NN-Dimethyltryptamine and Harmalas. The two are infused into various smoking blends. Why Changa? When vaporizing DMT the administration time window is very short and exceeding this time window is a common cause of mis-fires, aka sub breakthrough experiences. Now imagine there was no time window, no perfect temperature to exceed or reach, no special pricey vaporizers to buy and then practice with. On-set. The harmalas in the Changa increase the effects time. Remove plant material by however you wish. 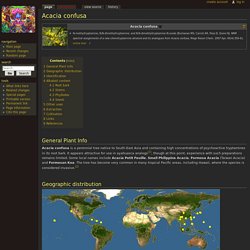 It appears attractive for use in ayahuasca analogs[1], though at this point, experience with such preparations remains limited. Welcome to Tryptamine Palace: The information source on the endogenous entheogens, DMT  and 5-MeO-DMT. Plants Containing DMT and Relative Advantages of Each. Erowid Experience Vaults: Acacia confusa (root bark) & Syrian Rue - Formosahuasca - 85507. Citation: mindbody. 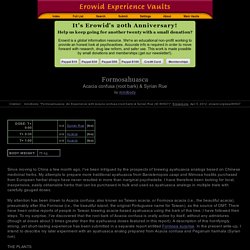 "Formosahuasca: An Experience with Acacia confusa (root bark) & Syrian Rue (ID 85507)". Erowid.org. Apr 5, 2012. erowid.org/exp/85507 Since moving to China a few month ago, I've been intrigued by the prospects of brewing ayahuasca analogs based on Chinese medicinal herbs. My attempts to prepare more traditional ayahuasca from Banisteriopsis caapi and Mimosa hostilis purchased from European herbal shops have never resulted in more than marginal psychedelia. My attention has been drawn to Acacia confusa, also known as Taiwan acacia, or Formosa acacia (i.e., the beautiful acacia), presumably after Ilha Formosa (i.e., the beautiful island, the original Portuguese name for Taiwan), as the source of DMT. Erowid Search Results for acacia confusa. Displaying Results 1 to 30 of 37 Acacia Vault Information about Acacia species including basics, effects, dosage, history, legal status, photos, research, media coverage, and links to other resources. 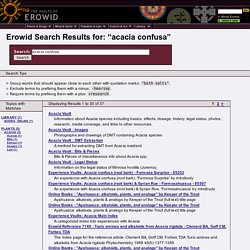