How Statins Cause Heart Problems; Use These Natural Solutions Instead – REALfarmacy.com. In the past, some MDs have proposed that statin drugs should be put into our water supplies and handed out to fast food customers. 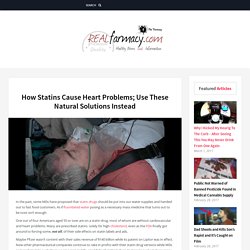 As if fluoridated water posing as a necessary mass medicine that turns out to be toxic isn’t enough. One out of four Americans aged 55 or over are on a statin drug, most of whom are without cardiovascular and heart problems. Many are prescribed statins solely for high cholesterol, even as the FDA finally got around to forcing some, not all, of their side effects on statin labels and ads. Maybe Pfizer wasn’t content with their sales revenue of $140 billion while its patent on Lipitor was in effect. Now other pharmaceutical companies continue to rake in profits with their statin drug versions while MDs and cardiologists push them on ignorant middle-aged folks that think their doctors know best. Dr. Pfizer must have spent many millions of dollars on just this one ad. The abstract mentions how CoQ10 is production is stymied by statins. Dr. Share: Comments comments. Dementia now striking people in their 40s as mercury from vaccines causes slow, degenerative brain damage.

Brain Exercises, Brain Fitness, Brain Games - BrainHQ from Posit Science. Amyloid proteotoxicity initiates an inflammatory response blocked by cannabinoids : npj Aging and Mechanisms of Disease. MC65 cells are a human CNS nerve cell line that contains the C-99 fragment of the amyloid precursor protein under the control of a tetracycline (tet)-sensitive promoter.12 The parent cell line is SK-N-MC from a human brain tumor, and it has an electrically excitable membrane typical of neurons.13 When tet is withdrawn, cells express C-99 that is converted to Aβ by γ-secretase and the cells die within 4 days (Figure 1a,b). 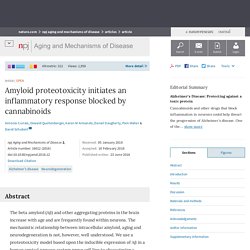 Aβ remains within the cell and forms aggregates.12,14 In the presence of γ-secretase inhibitors (SI), cells accumulate C-99, but do not die, and C99 does not aggregate. Intraneuronal Aβ induces an inflammatory response that is potentiated by arachidonic and linoleic acids. EWAO Active Compound in Cannabis Found to Shield the Brain from Alzheimer's Disease. The Explorer After my first UFO encounter I turned from a lifelong skeptic into a believer. 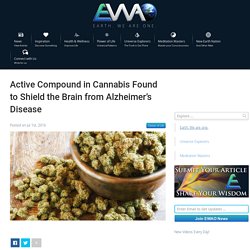 After I had my second UFO experience I became a true believer. Now I want to bring as much awareness as possible about this ongoing phenomenon. Latest posts by The Explorer (see all) Bad news for Alzheimer’s disease: THC (the active chemical compound in marijuana) is officially acknowledged to remove the toxic bundle of amyloid beta protein that onsets the evolution of the disease, ultimately damaging the brain beyond repair. This late discovery is backed up by previous studies revealing the effective and protective qualities of cannabinoids and THC over patients suffering from this neurodegenerative disease. Little is known about what exactly causes Alzheimer’ disease, but so far it’s believed to be caused by two types of lesions: neurofibrillary tangles and amyloid plaques.

GetSharedSiteSession?rc=4&redirect= Figure 1 Illustration of one isolated subvessel (top) and a bundle of subvessels of the primo vessel. 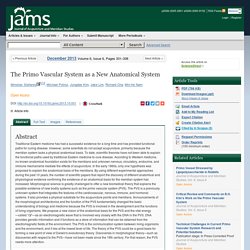 Figure 2 Schematic of the primo vascular system. Figure 3 Topographical distribution of the primo vascular system. Traditional Eastern medicine has had a successful existence for a long time and has provided functional paths for curing disease. How antidepressants ruin your natural serotonin so you can never be happy again ... without your pills. The frequency of the human body is? Discussion of human resonant frequency. SAO/NASA ADS Physics Abstract Service · Electronic On-line Article (HTML)· Table of Contents· Also-Read Articles (Reads History) · · Translate This Page Abstract Human bodies are often exposed to vertical vibrations when they are in the workplace or on vehicles. 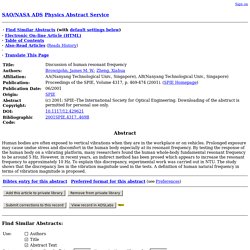 Prolonged exposure may cause undue stress and discomfort in the human body especially at its resonant frequency. By testing the response of the human body on a vibrating platform, many researchers found the human whole-body fundamental resonant frequency to be around 5 Hz. This “Muscle Of The Soul” May Be Triggering Your Fear & Anxiety. The psoas major muscle (pronounced “so-as”) is often referred to as the deepest core, or as yoga therapist and film-maker Danielle Olsonstates, the “muscle of the soul.” 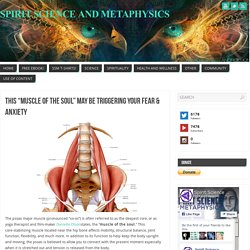 This core-stabilizing muscle located near the hip bone affects mobility, structural balance, joint function, flexibility, and much more. In addition to its function to help keep the body upright and moving, the psoas is believed to allow you to connect with the present moment especially when it is stretched out and tension is released from the body. Research indicates that the psoas is vital to our psychological wellbeing in addition to structural health. Liz Koch, author of The Psoas Book, states that our psoas “literally embodies our deepest urge for survival, and more profoundly, our elemental desire to flourish.” Researchers Find Missing Link Between the Brain and Immune System.

Implications profound for neurological diseases from autism to Alzheimer’s to multiple sclerosis. 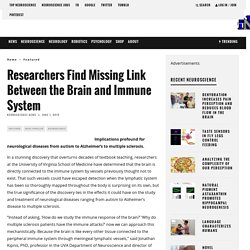 In a stunning discovery that overturns decades of textbook teaching, researchers at the University of Virginia School of Medicine have determined that the brain is directly connected to the immune system by vessels previously thought not to exist.