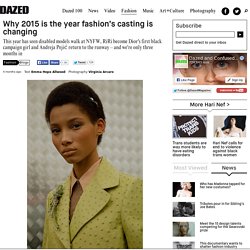 We’ve been witness to a full-frontal fashion statement thanks to Rick Owens’ trouserless models, seen Galliano’s triumphant return to the industry at Margiela, and been treated to Ben Stiller and Owen Wilson’s reprisal of their iconic Zoolander roles at the end of the Paris catwalk. But today, as we officially put the first quarter of the year behind us, there’s one theme that has risen from of the haze of 2015’s Instagram moments to dominate the past three months of fashion – casting. “Through the internet people all over the world are getting more acquainted with all types of people, faces and identities and starting to realise how insular fashion is,” explained Nafisa Kaptownwala, founder of outsider modeling agency Lorde Inc to Dazed last week, as she reflected on why fashion shows remain dominated by white models and whether the world is prepared for her collective’s radical vision of streetcast diversity. Why Cultural Appropriation Is Still A Problem In The Fashion Industry.

We all know of the Kardashian-Jenner clan in some way or another. 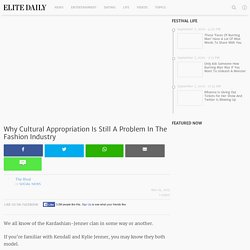 If you’re familiar with Kendall and Kylie Jenner, you may know they both model. Kendall Jenner is now a high-fashion model, and she recently walked the 2015 Victoria’s Secret fashion show. But, how did she earn this claim to modeling fame? She didn’t, of course. The industry headlines are filled with celebrities such as Kendall Jenner, Kylie Jenner and Gigi Hadid, who are known for other things besides their modeling abilities. My vegan soul dinner with Erykah Badu. (Photo: Getty Images for BET) It’s not everyday you get an invite to have dinner with Erykah Badu. 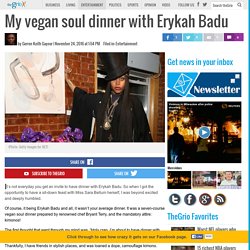 So when I got the opportunity to have a sit-down feast with Miss Sara Bellum herself, I was beyond excited and deeply humbled. Of course, it being Erykah Badu and all, it wasn’t your average dinner. It was a seven-course vegan soul dinner prepared by renowned chef Bryant Terry, and the mandatory attire: kimonos! The first thought that went through my mind was, “Holy crap, I’m about to have dinner with Erykah Badu.” Trump’s election means more police brutality towards black people. Donald Trump has won the presidency. 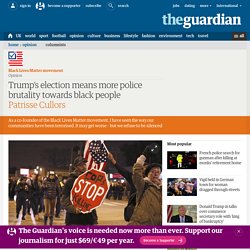 But did he win the nation’s heart? We must believe that he did. And, for now, it appears that his form of white nationalism has won too. Why the Kardashian-Jenner's Hairstyles are Cultural Appropriation. The Kardashian-Jenner clan is at it again. 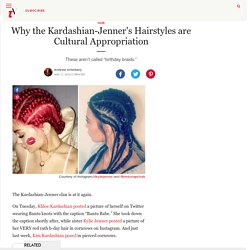 On Tuesday, Khloe Kardashian posted a picture of herself on Twitter wearing Bantu knots with the caption “Bantu Babe.” She took down the caption shortly after, while sister Kylie Jenner posted a picture of her VERY red 19th b-day hair in cornrows on Instagram. White People Are Rebranding Cornrows as 'Boxer Braids' Why Was the Media So Quick to Accept Caitlyn Jenner ‘Detransition’ Rumors? Caitlyn Jenner’s rep says she has no plans to transition back to living as a man. 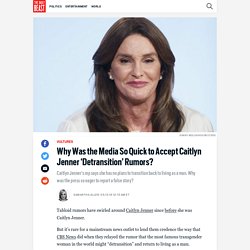 Why was the press so eager to report a false story? Tabloid rumors have swirled around Caitlyn Jenner since before she was Caitlyn Jenner. True Finns campaign to repeal same-sex marriage legislation. The Appropriation of Black Culture is not just a fad. Sherida Kuffour (above) writes on a phenomenon that has no boundaries, as she argues why appropriation of Black culture in all forms, is a big deal and its effects cannot just simply be wished away! 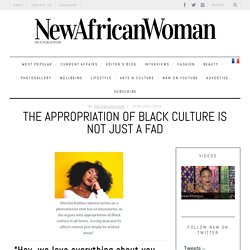 “Hey, we love everything about you… just not on you” From Elvis Presley, to Kylie Jenner to Iggy Azalea, and even Pablo Picasso, the entertainment and creative industries have long upheld the idea that blackness and all that it encompasses is valuable. But just without its black canvas. Fashion and The Appropriation of Black Culture. Photo: Steven Meisel/Vogue Italia Imitation is not always the highest form of flattery. 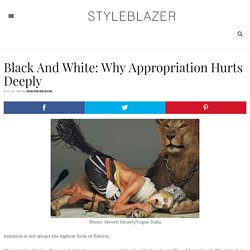 The ongoing debate of nuanced imitation versus appreciation has the “post-racial” world perplexed. The topic has come up nearly every week in the news and on social media, specifically pegged toward White women who love, “looking” and “acting Black.” The ultimate question begs to know if the adoption of Black fashion, physical features, and culture –by White counterparts– is appropriation or appreciation? Although both words have opposing definitions, when applied to Black culture and its convenient adoption by mainstream entities, the question is simple to answer.

A Magazine Used a White Model to Steal Beyoncé’s Style. At Super Bowl 50 in February, Beyoncé slayed the halftime show in an outfit that appeared to be an homage to the Black Panthers, the African-American revolutionary party that emerged in the 1960s. 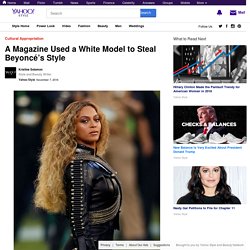 Bey’s squad of all-black backup dancers seemed to mirror the look of the militant group as it performed her anthem “Formation,” and many people saw her entire show as a rallying cry for the Black Lives Matter movement, according to the Daily Mail. Suffice it to say, Beyoncé intended to make a political statement about the myriad struggles of African-Americans throughout recent history.