We are a group of Behavioral Experts and Data scientists that are trying to transform personal finance into an easy experience. That is why we decided to build an Artificial Intelligence that works behind the scenes to make sure you are on track financially, and never spiral out of control.

4 Crazy Overdraft Prevention Techniques that Actually Work - Change Labs. In such a divided world, it’s reassuring to know most of us have one nagging pet-peeve in common. 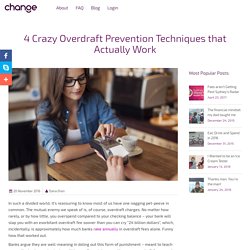 The mutual enemy we speak of is, of course, overdraft charges. No matter how rarely, or by how little, you overspend compared to your checking balance – your bank will slap you with an exorbitant overdraft fee sooner than you can cry “24 billion dollars”, which, incidentally, is approximately how much banks rake annually in overdraft fees alone. Funny how that worked out. Banks argue they are well-meaning in doling out this form of punishment – meant to teach you a stinging lesson in staying within your financial means. Outrageous Overdraft Fees Finally Meet their Match - Change Labs. If you’ve ever been slapped with an overdraft fee, odds are you (a) didn’t see it coming, and (b) ended up paying more in fees than you originally tried to draw. 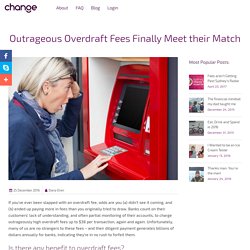 Banks count on their customers’ lack of understanding, and often partial monitoring of their accounts, to charge outrageously high overdraft fees up to $38 per transaction, again and again. Unfortunately, many of us are no strangers to these fees – and their diligent payment generates billions of dollars annually for banks, indicating they’re in no rush to forfeit them. Is there any benefit to overdraft fees?

By design, overdraft fees are charged to discourage bank customers from overdrawing their accounts; essentially, it’s a penalty for failing to live within your means. These automatic fees often increase incrementally on a daily (!) 2017 Financial Game Plan: The Experts Weigh in - Change Labs. It’s the dawn of a new year, and everyone around you is reinventing themselves. 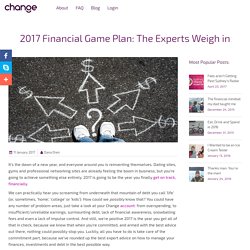 Dating sites, gyms and professional networking sites are already feeling the boom in business, but you’re going to achieve something else entirely. 2017 is going to be the year you finally get on track, financially. We can practically hear you screaming from underneath that mountain of debt you call ‘life’ (or, sometimes, ‘home’, ‘college’ or ‘kids’): How could we possibly know that? You could have any number of problem areas, just take a look at your Change account: from overspending, to insufficient/unreliable earnings, surmounting debt, lack of financial awareness, snowballing fees and even a lack of impulse control. And still, we’re positive 2017 is the year you get all of that in check, because we know that when you’re committed, and armed with the best advice out there, nothing could possibly stop you. 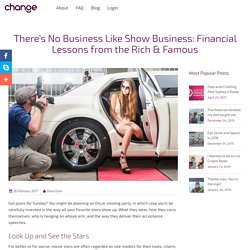 You might be planning an Oscar viewing party, in which case you’ll be carefully invested in the way all your favorite stars show up: What they wear, how they carry themselves, who is hanging on whose arm, and the way they deliver their acceptance speeches. Look Up and See the Stars. Tips & Tricks to Better Financial Health: How Sydney Saved 36% of her Gross Annual Income - Change Labs. No one is born a financial genius, and even those who’ve become such experts could use a few tips now and then. 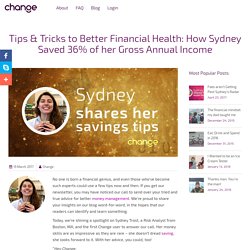 If you get our newsletter, you may have noticed our call to send over your tried and true advice for better money management. We’re proud to share your insights on our blog word-for-word, in the hopes that our readers can identify and learn something. Getting Over Overdraft – Part I: Identifying the Root of the Problem - Change Labs. Change Labs. What if I told you there is a well crafted piece of software, that when plugged into your Bank account OR Credit Cards, it can automatically eliminate banking fees that you pay, dramatically reduce your interest charges and make you mindful of your spending habits - to me that’s just magical? 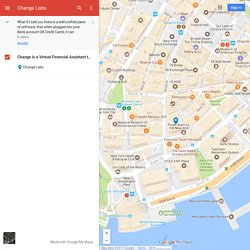 But for underserved Millennials in America, who are stuck in financial quicksand, it can be a lifesaver! They are collectively paying over $100B per year on Bank Fees and Interest Charges, simply because they don’t pay attention and even when they do, they are slow to act. Financial Institutions make their profit off that human weaknesses and we are here to change that! Getting Over Overdraft – Part II: Shake it Off - Change Labs. Account chronically overdrawn? 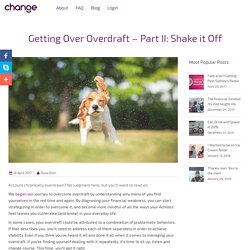 No judgment here, but you’ll want to read on. We began our journey to overcome overdraft by understanding why many of you find yourselves in the red time and again. By diagnosing your financial weakness, you can start strategizing in order to overcome it, and become more mindful of all the ways your Achilles’ heel leaves you vulnerable (and broke) in your everyday life. In some cases, your overdraft could be attributed to a combination of problematic behaviors. Like fairy dust for your bank account.