Chandrakant Patil is an Indian politician who is State President BJP Maharashtra. He has served as the Cabinet Minister of Maharashtra since July 2016. He is responsible for Revenue and Public Works.

Statement on Pune’s 8 Vidhan Sabha Constituencies. Maharashtra state elections are set to commence soon, and many political parties have started their election campaigns as well as plans accordingly. 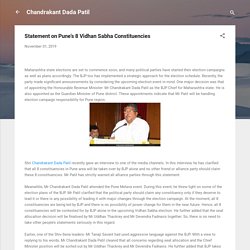 Press Conference at Kolhapur. The month of October has been very happening for the Maharashtra state with reference to changed political equations, the elections, and the election results. 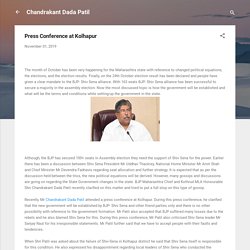 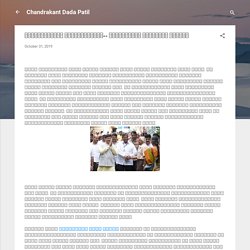 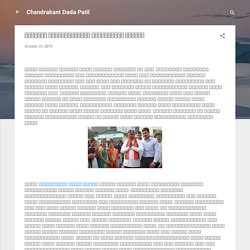 First Melava at Kothrud for the Election. The BJP recently came up with a surprising decision regarding the Assembly election ticket for the BJP Chief of Maharashtra- Mr Chandrakant Dada Patil. 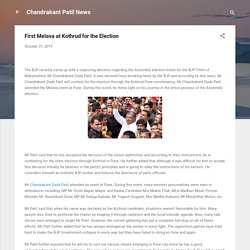 It was eleventh-hour breaking news by the BJP and according to this news, Mr Chandrakant Dada Patil will contest for the election through the Kothrud Pune constituency. Mr Chandrakant Dada Patil attended the Melava event at Pune. During this event, he threw light on his journey in the entire process of the Assembly election. Mr Patil said that he has accepted the decision of the senior authorities and according to their instructions, he is contesting for the state election through Kothrud in Pune. Auto-Rickshaw Journey in Election Campaign. Traffic is the most severe issue in Pune city. 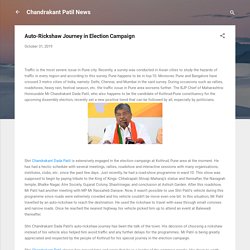 Recently, a survey was conducted in Asian cities to study the hazards of traffic in every region and according to this survey, Pune happens to be in top-10. Moreover, Pune and Bangalore have crossed 3 metro cities of India, namely- Delhi, Chennai, and Mumbai in the said survey. During occasions such as rallies, roadshows, heavy rain, festival season, etc. the traffic issue in Pune area worsens further. 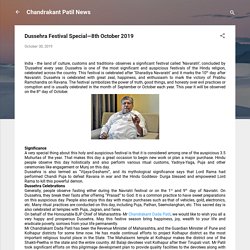 Dussehra is one of the most significant and auspicious festivals of the Hindu religion, celebrated across the country. This festival is celebrated after ‘Sharadiya Navaratri’ and it marks the 10th day after Navaratri. Dussehra is celebrated with great zeal, happiness, and enthusiasm to mark the victory of Prabhu Ramchandra on Ravana. Kojagiri Poornima Special—13th October 2019. India is known as the land of culture, customs, and traditions. 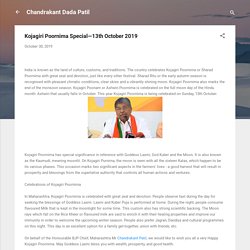 The country celebrates Kojagiri Poornima or Sharad Poornima with great zeal and devotion, just like every other festival. Sharad Ritu or the early autumn season is recognised with pleasant climatic conditions, clear skies and a vibrantly shining moon. Kojagiri Poornima Special—13th October 2019. Shubh Deepawali— (Deepawali Special—25/10/2019-28/10/2019) Diwali or Deepawali is a major Hindu festival of India. 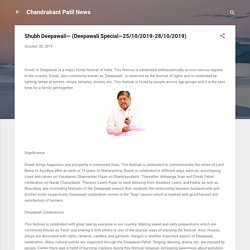 This festival is celebrated enthusiastically across various regions in the country. Diwali, also commonly known as ‘Deepawali’, is observed as the festival of lights and is celebrated by lighting lamps at homes, shops, temples, streets, etc. Polite Appeal to Vote through a Twitter Video. Maharashtra’s State election season has already begun, and all the political parties are putting significant efforts for election campaigns. 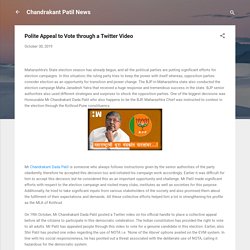 In this situation, the ruling party tries to keep the power with itself whereas, opposition parties consider election as an opportunity for transition and power change. The BJP in Maharashtra state also conducted the election campaign Maha Janadesh Yatra that received a huge response and tremendous success in the state. BJP senior authorities also used different strategies and surprises to shock the opposition parties. One of the biggest decisions was Honourable Mr Chandrakant Dada Patil who also happens to be the BJP, Maharashtra Chief was instructed to contest in the election through the Kothrud-Pune constituency. Launching of the Kothrud Manifesto. BJP Chief of Maharashtra and the Mahayuti candidate for Kothrud constituency- Mr Chandrakant Dada Patil recently presented the manifesto for Kothrud. This manifesto is totally promising and in line with the developmental initiatives planned for this constituency.

On 24th October, Maharashtra state election results were declared and the BJP-Shiv Sena alliance established the control again for the next 5 years term. BJP and Shiv-Sena have secured 161 seats in total out of 288 and they have received a clear majority for establishing their government again in the state. A few of the constituencies were considered as the prestigious ones due to the changed political equations and many other factors. One of the prestigious constituencies among the state was the Kothrud-Pune constituency. This constituency has been secured by the BJP Chief of Maharashtra- Honourable Mr Chandrakant Dada Patil. Yesterday, the election results were declared, and all media channels concentrated on only election result news. After this victory, Shri Chandrakant Dada Patil took to his Twitter account to thank voters and express himself.

In short, it can be concluded that it is a new inning for Mr Chandrakant Dada Patil. Exit Poll Predictions. The Maharashtra state assembly elections are going to be held on 21st October 2019, the results of which will be out on 24th October 2019. Meanwhile, many exit polls are being declared by different political analysts, news channels and experts. A majority of these polls have claimed that the BJP- Shiv Sena Government will be back in the state. According to these polls, Honourable Mr Devendra Fadnavis will be appointed as the Chief Minister of the state again. Interview to Policenama. Appointment of Mr Bavankule as the East Vidarbha Election Campaign Chief.

On 21st October, the Maharashtra state elections are set to commence and BJP-Shiv-Sena have already started discussions regarding seat allocation and election strategy. In this situation, political equations can easily get changed due to some reasons or on account of some hidden plans and strategies. Local supporters or activists are generally unaware of these long-term decisions and they sometimes complain about the changes occurring. Society Redevelopment—The Key for Kothrud Makeover.

Shri Chandrakant Dada Patil is contesting for the state election through the Kothrud-Pune constituency. Through means of the election campaign, he has strengthened his public relations and gathered massive support as well as backing from several sectors and stakeholders of the society. Mr Patil also had a talk with many housing society committees through meetings and visits. In doing so, he collected significant inputs regarding the problems faced by them and their expectations. After gaining these insights, Mr Patil said that the makeover of Kothrud will only be possible when the way for redevelopment of the society will be hurdle-free.

“Karkarta Karta-Dharta” Movement—A Huge Success. The BJP President of Maharashtra and the Mahayuti candidate for Kothrud constituency- Honourable Mr Chandrakant Dada Patil presented his invention in the election campaign through a unique and innovative initiative called — “ Karykarta Karta-Dharta”. According to several social media sources, this campaign has been a huge success and Shri Chandrakant Dada Patil is being accounted credible for the same. This digital campaign was launched by Mr Patil to honour and acknowledge all BJP workers and activists who work hard with a view to strengthening the party. As of now, Mr Chandrakant Patil has posted 3 videos on his official Twitter handle regarding this movement. He has explained the foundation and thought process behind this campaign, which originated from King Chhatrapati Shivaji Maharaj’s thought process and all-inclusive approach towards Swarajya activists, also known as ‘Mavalas’.