Desktop Fun: Steampunk Theme Wallpapers. Do you enjoy imagining what it would be like to live in a world where technology and fantasy are mixed together? 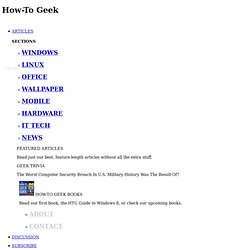 Then kick back and get ready to indulge in some great daydreaming with the first in our series of Steampunk Wallpaper collections. Steampunk Series 1 If the image links fail for some reason you can download the entire set as a zipped file here. Note: Click on the picture to see the full-size image—these wallpapers vary in size so you may need to crop, stretch, or place them on a colored background in order to best match them to your screen’s resolution. More Steampunk Goodness for You and Your Desktop Desktop Fun: Steampunk Wallpaper Collection Series 2 Desktop Fun: Steampunk Customization Set Desktop Fun: Steampunk Fonts. 25 Steampunk Inspired Wallpapers. To all those who do not know what Steampunk is, let me give you a basic definition of Steampunk, from Wikipedia: Steampunk is a sub-genre of science fiction, alternate history, and speculative fiction that came into prominence during the 1980s and early 1990s. 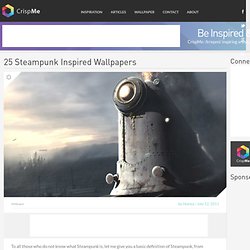 Steampunk involves a setting where steam power is still widely used—usually the Victorian era Britain—that incorporates elements of either science fiction or fantasy – Wikipedia Here are some 25 wallpapers that make use of the Steampunk theme, and either are inspired from Steampunk designs. The artists of these are unknown – so contact us if you see one of your works here. We will be more than glad to credit you. Laura Mersini-Houghton. Education[edit] Laura Mersini-Houghton received her undergraduate degree from the University of Tirana, Albania, and her M.Sc. from the University of Maryland. 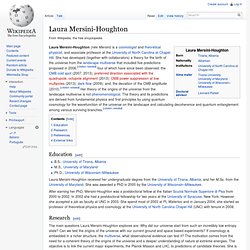 She was awarded a PhD in 2000 by the University of Wisconsin–Milwaukee. After earning her PhD, Mersini-Houghton was a postdoctoral fellow at the Italian Scuola Normale Superiore di Pisa from 2000 to 2002. In 2002 she had a postdoctoral fellowship for two years at the University of Syracuse, New York. However she accepted a job as faculty at UNC in 2003. Research[edit] Oor Hamlet - Scottish Song about Hamlet Lyrics, Free MP3, Sheet Music, Chords. The Scale of the Universe 2. 20 interesting facts about science. The biggest (known) star in the universe – Canis Majoris, could fit 7 000 000 000 000 000 Earths. 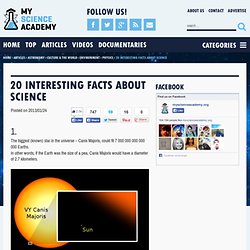 In other words, if the Earth was the size of a pea, Canis Majoris would have a diameter of 2.7 kilometers. Here’s how a sphere of whole water existing on the planet would look in relation to the Earth. (diameter of 1385km). Fresh water in a liquid state (not counting the glaciers), is only 0.77% of the world water. Heat Signature of Mimas – Saturn’s moon, is similar in shape to Pac-Man. Here’s how far the first terrestrial radio transmissions reached (112 years). Newfound ‘super-Earth’ could support life. This artist’s impression shows the newfound potentially habitable alien planet HD40307g in the foreground. 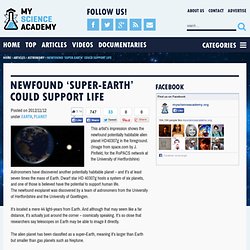 (Image from space.com by J. Pinfield, for the RoPACS network at the University of Hertfordshire) Astronomers have discovered another potentially habitable planet – and it’s at least seven times the mass of Earth. Dwarf star HD 40307g hosts a system of six planets, and one of those is believed have the potential to support human life. 27 Science Fictions That Became Science Facts In 2012.

We may never have our flying cars, but the future is here. 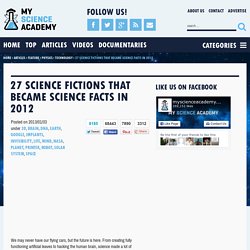 From creating fully functioning artificial leaves to hacking the human brain, science made a lot of breakthroughs this year. 1. Quadriplegic Uses Her Mind to Control Her Robotic Arm At the University of Pittsburgh, the neurobiology department worked with 52-year-old Jan Scheuermann over the course of 13 weeks to create a robotic arm controlled only by the power of Scheuermann’s mind. The team implanted her with two 96-channel intracortical microelectrodes. 2. Once the robot figures out how to do that without all the wires, humanity is doomed. 3. Photo Courtesy of Indigo Moon Yarns. At the University of Wyoming, scientists modified a group of silkworms to produce silk that is, weight for weight, stronger than steel. 4. Is there a long-lost fifth gas giant of our solar system? Was our solar system once home to a fifth gas-giant? 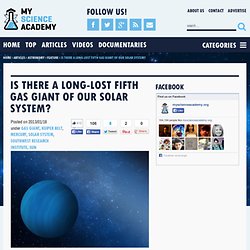 An astronomer from the Southwest Research Institute in Texas believes it might have been. First, it isn’t entirely unusual for planets to be ejected from planetary systems. In fact, astronomers think one or more planets may have been kicked from a system when there are hot-Jupiter exoplanets orbiting their parent start from an unusually close distance.. Usually only a fraction of the distance that separates Mercury from the Sun. Most think these planets likely formed much further out than their rocky counterparts, but were somehow sent inwards to the inner solar system, booting out the unfortunate planets that lie in their path.