Gmail Users to Get Free Phone Calls. Google has announced that Gmail users will be able to make free phone calls to the U.S. and Canada through 2011. 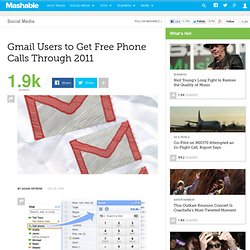 When calling was added to Gmail back in August, the company said that it’d be making such calls free “for at least the rest of the year,” with per minute rates starting at $0.02 per minute for international dialing. The service made a major splash initially, with 1 million calls placed in the first 24 hours and pundits predictably calling the service a potential Skype killer. That said, we haven’t heard many updates about the traction the service is getting since then, though free calling for all of 2011 certainly stands to lure more users.

We’ve reached out to Google for some updated numbers and will post here if we hear back. In the meantime, let us know in the comments if you’re making phone calls from Gmail. Richard Littledale&#039;s Preacher&#039;s A – Z. HOW TO: Optimize Your LinkedIn Profile. With more than 85 million members in more than 200 countries, LinkedIn is a professional social network worth using, understanding and optimizing. 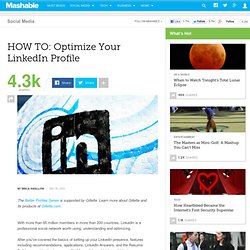 After you've covered the basics of setting up your LinkedIn presence, features including recommendations, applications, LinkedIn Answers, and the Resume Builder can add value to your profile. Many of these highly useful features, though, are often overlooked or underused by newcomers. We spoke with four LinkedIn aficionados to get their top advice on making the best use of these tools. Read on for their thoughts and let us know which tips you'd add for optimizing LinkedIn profiles in the comments below. Cover the Basics The first step to spiffing up your LinkedIn profile is to fill in as much information about your work experience as possible. Sharlyn Lauby, president of Internal Talent Management, HR blogger and guest contributor for Mashable, believes that a person's LinkedIn profile should, at minimum, reflect his or her current situation. Twitter.

Social Media - TNW. Tweeterism - Guide to Twitter tools, apps and culture. Social media cheat sheet – super speedy, all you needy. Download our cheat sheet here (To download it, simply share the love using the pink box at the bottom of the page!) 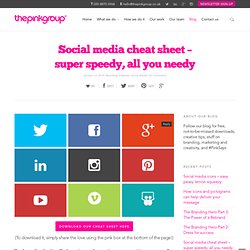 You know the situation. You’ve got a new logo or image you want to use across all your social media, and that means spending the next hour Googling what size the image needs to be, how big the file can be and how many different options you need. As a super-busy creative agency ourselves, we know how frustrating and time consuming that is! Well now you can use that hour to sit back and relax as we’ve done all the hard work for you, and put together an awesome social media cheat sheet for you to download.

With our cheat sheet, you won’t need to pay your branding agency to get on the case, because you’ll have everything you need to brand your own pages across all your social media channels. It’s free to download and all we ask is that you share the love using the pink box below. Google Plus Google+ is great for SEO and can really drive traffic to your site. List of emoticons. A simple smiley This is a list of notable and commonly used emoticons or textual portrayals of a writer's mood or facial expression in the form of icons.

The Western use of emoticons is quite different from Eastern usage, and Internet forums, such as 2channel, typically show expressions in their own ways. In recent times, graphic representations, both static and animated, have taken the place of traditional emoticons in the form of icons. Emoticons can generally be divided into two groups: Western or Horizontal (mainly from America and Europe), and Eastern or Vertical (mainly from east Asia).

The most common explanation for these differences is how the different cultures value different parts of the face, i.e. eyes often play a bigger part in figuring out mood in the East while the West puts the eyes as equal to the rest of the face.[1] Western The emoticon in Western style is written most often from left to right as though the head is rotated counter-clockwise 90 degrees. Emoticon. Origin of the term[edit] The word is a portmanteau word of the English words emotion and icon. 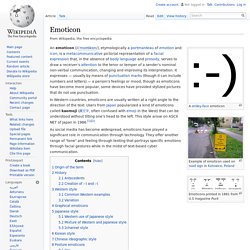 In web forums, instant messengers and online games, text emoticons are often automatically replaced with small corresponding images, which came to be called emoticons as well.