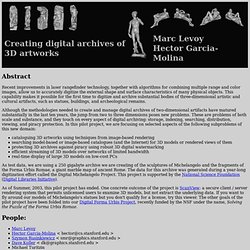 This capability makes it possible for the first time to digitize and archive substantial bodies of three-dimensional artistic and cultural artifacts, such as statues, buildings, and archeological remains. Although the methodologies needed to create and manage digital archives of two-dimensional artifacts have matured substantially in the last ten years, the jump from two to three dimensions poses new problems. These are problems of both scale and substance, and they touch on every aspect of digital archiving: storage, indexing, searching, distribution, viewing, and piracy protection. In this pilot project, we are focusing on selected aspects of the following subproblems of this new domain: As of Summer, 2003, this pilot project has ended. Auguste Rodin&#039;s Sculpture, Art and Drawings the Kiss, Thinker, Gates of Hell. Louvre, Stanford and Hotel Biron. Roberto Rosenman&#039;s Online Portfolio. Kurt Anderson Gallery. Kimber Scott - In Progress. Martha Sharp Original Oil Paintings. 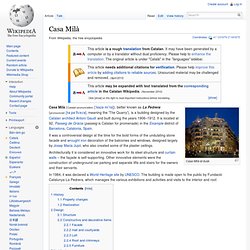 It is located at 92, Passeig de Gràcia (passeig is Catalan for promenade) in the Eixample district of Barcelona, Catalonia, Spain. ART. Words in Images: Victor Burgin: What Does Possession Mean to You? Impressionist. Impressionism is a 19th-century art movement that originated with a group of Paris-based artists. 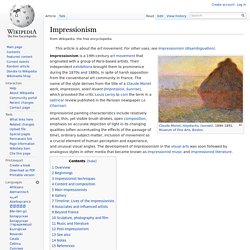 Their independent exhibitions brought them to prominence during the 1870s and 1880s, in spite of harsh opposition from the conventional art community in France. The name of the style derives from the title of a Claude Monet work, Impression, soleil levant (Impression, Sunrise), which provoked the critic Louis Leroy to coin the term in a satirical review published in the Parisian newspaper Le Charivari. Overview[edit] Radicals in their time, early Impressionists violated the rules of academic painting.

They constructed their pictures from freely brushed colours that took precedence over lines and contours, following the example of painters such as Eugène Delacroix and J. Aesthetics. "Aesthetician" redirects here. 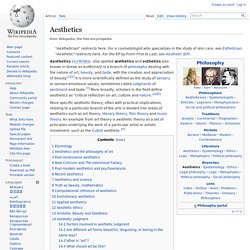 For a cosmetologist who specializes in the study of skin care, see Esthetician. More specific aesthetic theory, often with practical implications, relating to a particular branch of the arts is divided into areas of aesthetics such as art theory, literary theory, film theory and music theory. Bbc entertainment, arts and culture. Art Types. Graphic Design 2. Escher Print. Art.

Claude Monet. Oscar-Claude Monet (French: [klod mɔnɛ]; 14 November 1840 – 5 December 1926) was a founder of French Impressionist painting, and the most consistent and prolific practitioner of the movement's philosophy of expressing one's perceptions before nature, especially as applied to plein-air landscape painting.[1][2] The term "Impressionism" is derived from the title of his painting Impression, soleil levant (Impression, Sunrise), which was exhibited in 1874 in the first of the independent exhibitions mounted by Monet and his associates as an alternative to the Salon de Paris. 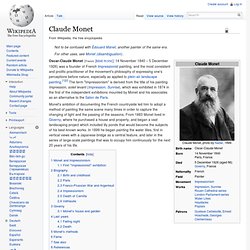 Monet's ambition of documenting the French countryside led him to adopt a method of painting the same scene many times in order to capture the changing of light and the passing of the seasons. From 1883 Monet lived in Giverny, where he purchased a house and property, and began a vast landscaping project which included lily ponds that would become the subjects of his best-known works. Monet and Impressionism Biography Paris. YPOC - Your Photo On Canvas - Photo To Canvas Printers. 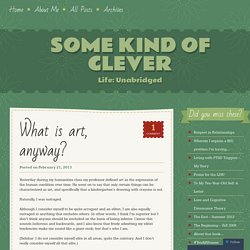 He went on to say that only certain things can be characterized as art, and specifically that a kindergarten’s drawing with crayons is not. Naturally, I was outraged. Although I consider myself to be quite arrogant and an elitist, I am also equally outraged at anything that excludes others. In other words, I think I’m superior but I don’t think anyone should be excluded on the basis of being inferior. I know this sounds ludicrous and backwards, and I also know that freely admitting my elitist tendencies make me sound like a giant snob, but that’s who I am.

(Sidebar: I do not consider myself elite in all areas, quite the contrary. So, sitting in class listening to this, I just couldn’t help myself. I challenged him by asking him this question: “Who is it that decided such a limited definition of art?” Nudity in Art: A Virtue of Vice?, By Brian Yoder. By Brian K. 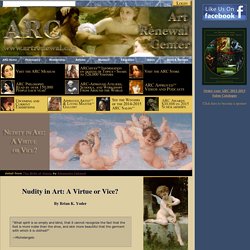 Yoder The Complaint ome people feel that the nude form is something that should be hidden away both in art and the artist's classroom. Although this may seem at first like a mere annoyance, such people frequently attempt to stop others from viewing or learning from the human form, thereby infringing on their rights to create and consume art as they wish. On the ARC website there are countless paintings and sculptures featuring nude figures. John Myatt: The former art forger is using celebrities as models to re-create world-famous masterpieces. By Victoria Woodhall Updated: 20:01 GMT, 29 January 2011 He went from teacher to forger – and was sent to prison for the biggest art fraud of the 20th century. 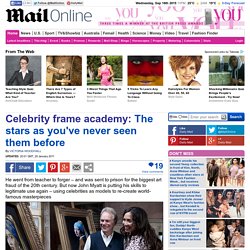 But now John Myatt is putting his skills to legitimate use again – using celebrities as models to re-create world-famous masterpieces John with Myleene Klass, who posed as Girl with a Pearl Earring John Myatt’s colourful life as a ‘convicted art forger made good’ has Hollywood movie written all over it. British Museum defines Greek naked ideal. The art of Ancient Greece focused unashamedly on the naked body. 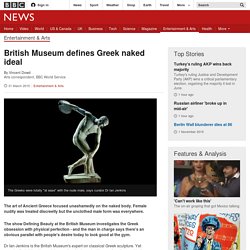 Female nudity was treated discreetly but the unclothed male form was everywhere. The show Defining Beauty at the British Museum investigates the Greek obsession with physical perfection - and the man in charge says there's an obvious parallel with people's desire today to look good at the gym. Artist Alexa Meade paints directly onto human models to make them look like canvases. By Daily Mail Reporter Updated: 12:13 GMT, 22 August 2011 Normally when a model poses for an artist, they are expected to remain motionless. 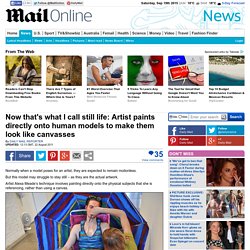 But this model may struggle to stay still – as they are the actual artwork. Artist Alexa Meade’s technique involves painting directly onto the physical subjects that she is referencing, rather than using a canvas. Manet's ambition revealed at Paris exhibition. The Musee d'Orsay in Paris has just opened the biggest exhibition in France in decades of the work of the painter Edouard Manet. The new show investigates what lay behind Manet's image as an elegant man-about-town. Descriptions of Edouard Manet often resort to the untranslatable French term 'flaneur'.

In the late 19th century a flaneur was a well-to-do dandy, observing the city around him but always slightly distant from it. Walking around the galleries at the Musee d'Orsay you can see why some art lovers find Manet a little reserved. By and large his work lacks gorgeous blue skies and parasols and beach scenes - the sunny holiday scenes which make Impressionism such an easy sell. Born in 1832 to a wealthy Parisian family, Manet steered clear of too much involvement with his Impressionist contemporaries, although the new show makes their mutual influence clear.

Changing art market gives Sydney four art fairs at once. By Jane O'Sullivan The opening night of the Art Basel Hong Kong art fair was manageable. "But every single day after, the crowds got bigger and bigger and bigger," Sydney art dealer Joanna Strumpf says. iPhones hovered constantly around Sam Jinks' hyper-realistic sculptures of human figures and the gallery had to post two staff members to protect the artworks.

Says Strumpf, "At any one time in the stand we might have had 70-plus people, and that's a lot in a small space … It was quite fantastic and a little bit daunting. " Art Basel Hong Kong's eerily realistic nude sculpture. The remarkably life-like nude sculpture, created by Australian artist Sam Jinks, was by far the most photographed work at this year's Art Basel in Hong Kong, a three-day art fair that has attracted tens of thousands of visitors since it first launched nearly three years ago. A powerhouse brand in the art fair industry, Art Basel bought-out the homegrown Hong Kong International Art Fair in 2011, and quickly cemented the city's position in the multi-billion dollar global art market.

People From Classic Paintings Inserted Into Modern City Life (Part 2) Alexey Kondakov, the Ukrainian artist whom we covered before, is back with new images of figures from classical paintings photoshopped into modern locations. The ongoing series, titled The Daily Life Of Gods, features images such as William-Adolphe Bouguereau’s Nymphs and Satyr, or Cesar van Everdingen’s Bacchus. In fact, the paintings of Cesar van Everdingen are what first inspired Kondakov to start creating. “I realized that the heroes of these masterpieces were simply looking to spend quality time [together], like us,” reports Modern Met. Rokeby Venus: The painting that shocked a suffragette. A century ago a painting in the National Gallery was slashed by a suffragette. The day Lucian Freud turned Jerry Hall into a man: How the artist painted the model's face as a male after she 'didn't show up for two sittings' By Geordie Greig Published: 00:32 GMT, 18 September 2013 | Updated: 16:27 GMT, 7 November 2014 As a brilliant new biography reveals, the artist Lucian Freud lived a life as colourful as it was uncompromising.

Michigan Town Moves 'Blue Human Condition' Sculpture After Backlash. A small town in southeastern Michigan was forced to move a sculpture away from municipal buildings after getting an earful from locals who complained the artwork was too racy. The sculpture, "Blue Human Condition," appears to depict seven human figures of unknown gender huddled in ambiguous standing and sitting positions. Nudity in Art - From a Christian Perspective.

This article is a compilation of several blog posts I wrote in 2011. Meet the therapist who likes painting on naked models. A therapist by day, Gesine Marwedel spends her free time painting nude models. Photo: Barcroft. Body artist captures nude women blended into city scenes. Artist Transforms Scrap Metal into Lifelike Animal Sculptures. Specializing in metal and inspired by nature, artist John Brown transforms spare bits of scrap into quirky animal sculptures. The gifted artist manages to repurpose salvaged metal by producing delicate, lifelike characters that range from colorful butterflies and insects to birds, snakes, and frogs. Each piece is welded into shape and then painted over with an oil paint to mimic the natural markings of each subject. 5-Year-Old Girl with Autism Paints Breathtaking Works of Art. For many people diagnosed with autism, communicating through speech and social interaction can be challenging.

As a way to express herself, 5-year-old Iris Grace began painting last year, and has already garnered praise across the globe for her incredibly beautiful works of art. The young artist, who lives in the UK with her parents and her cat Thula, creates gorgeous paintings filled with dreamy colors and fascinating textures. Beyond Rodin: New Directions in Contemporary Figurative Sculpture. Carole A. Feuerman - From Studio to Foundry. Pornography vs. The Nude in Art: The Catholic-Christian Perspective « Conservative Colloquium.

Giovanni Battista Moroni; Egon Schiele: The Radical Nude – review. It is hard to believe that there are any painters of genius still ripe for rediscovery, in this country at least, but so it seems with the elusive 16th-century Italian portraitist Giovanni Battista Moroni. Off Piste – Drawing inspiration. Lucian Freud: life writ large. Intense master creates show of the summer. Picture gallery: the nude in contemporary art. What exactly are the Leonardo da Vinci drawings in the Laing Art Gallery exhibition? Naked People Dipped In Honey Make For A Truly Hypnotic Work Of Art (NSFW) The Human Body, Bare Facts and All, in a Retrospective at the Montclair Art Museum. Art Blog for Creative Living. Beautiful women emerge from the deep in captivating pictures painted by street artist.