The Facts About Americans Who Receive Public Benefits – Center for American Progress. Download this issue brief (pdf) Introduction Gross misperceptions about who receives public benefits and for what purposes are leading the nation toward debates that distract from the real problems facing middle-class and low-income Americans. 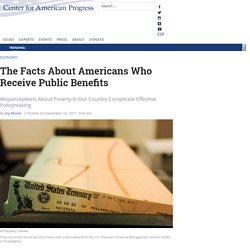 Who receives government benefits, in six charts. "There are 47 percent of the people who will vote for the president no matter what," Mitt Romney famously said. 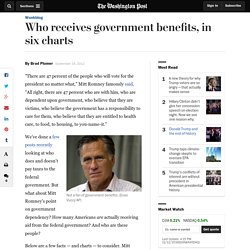 "All right, there are 47 percent who are with him, who are dependent upon government, who believe that they are victims, who believe the government has a responsibility to care for them, who believe that they are entitled to health care, to food, to housing, to you-name-it. " Not a fan of government benefits. (Evan Vucci/AP) We've done a few posts recently looking at who does and doesn't pay taxes to the federal government. But what about Mitt Romney's point on government dependency? Below are a few facts — and charts — to consider. 1) In 2011, about 49 percent of the population lived in a household where at least one member received a direct benefit from the federal government. Census: 49% of Americans Get Gov’t Benefits; 82M in Households on Medicaid. HHS Secretary Kathleen Sebelius, President Barack Obama and then-House Speaker Nancy Pelosi in the White House on March 23, 2010, the day Obama signed the Patient Protection and Affordable Care Act. 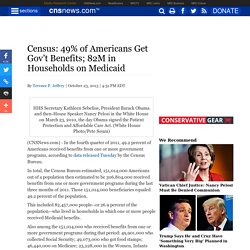 (White House Photo/Pete Souza) (CNSNews.com) - In the fourth quarter of 2011, 49.2 percent of Americans received benefits from one or more government programs, according to data released Tuesday by the Census Bureau. In total, the Census Bureau estimated, 151,014,000 Americans out of a population then estimated to be 306,804,000 received benefits from one or more government programs during the last three months of 2011. Department of Children & Family Services. Fraud includes concealing or not reporting information in order to receive ineligible public assistance benefits (the Supplemental Nutrition Assistance Program, Family Independence Temporary Assistance Program, Kinship Care Subsidy Program and Child Care Assistance Program) and Electronic Benefit Transfer benefits. 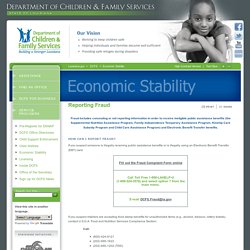 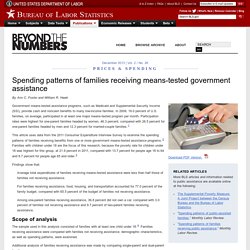 Foster and William R. Hawk Government means-tested assistance programs, such as Medicaid and Supplemental Security Income (SSI), provide cash and noncash benefits to many low-income families. In 2009, 19.0 percent of U.S. families, on average, participated in at least one major means-tested program per month. This article uses data from the 2011 Consumer Expenditure Interview Survey to examine the spending patterns of families receiving benefits from one or more government means-tested assistance programs.2 Families with children under 18 are the focus of this research, because the poverty rate for children under 18 was highest for this group, at 21.9 percent in 2011, compared with 13.7 percent for people age 18 to 64 and 8.7 percent for people age 65 and older.3 Findings show that: Average total expenditures of families receiving means-tested assistance were less than half those of families not receiving assistance.

Scope of analysis Findings Chart 1. Forbes Welcome. 1 in 5 Americans receive government assistance: food stamps, welfare, Medicaid details. The Census Bureau says the food stamp program is one of the most widely used means-tested assistance programs.John Kuntz, Northeast Ohio Media Group CLEVELAND, Ohio -- One in five Americans received monthly assistance from at least one of a variety of government programs throughout 2012, a report issued Thursday by the Census Bureau says. 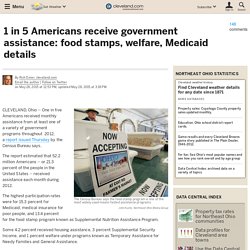 The report estimated that 52.2 million Americans -- or 21.3 percent of the people in the United States -- received assistance each month during 2012. US Welfare System - Help for US Citizens.