VOD Cutter. What 1 cent and luck can buy you on eBay. Blue Stahli - Stahlivision 99.5. Vk.com. Discordapp. Walking in the forest and navigating through flooded regions of the Amazon rainforest, we'll be taking pictures, sound recordings and filming of the fauna and flora to serve as a basis for creating a new series of digital art by artist Andy Thomas. 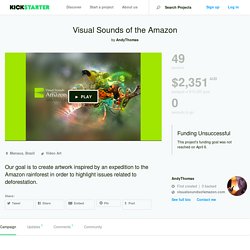 All observations will be scientifically classified by the biologist Reynier Omena Junior. The organization of the journey is being prepared by cultural producer Ricardo Queiroz. Once photos, video and sound recordings have been captured, back in the his studio, Andy Thomas will create a new audio visual artwork series with detailed photoshop artwork and sound responsive animation triggered by the wave forms of the sounds captured in the forest. We also will prepare a small documentary film of this expedition that will be freely distributed online. To finance the activities of this project we are raising funds through a crowd funding campaign on Kickstarter. You can help us to publish this idea in your social network or in your site. Sound and picture development. Ircam Verb v3 - Room Acoustics and Reverberation [ AU 32 & 64 bit | VST 32 & 64 bit | AAX Native/AudioSuite 32 & 64 bit* ] Ircam Verb v3 is an algorithmic room acoustics and reverberation processor. 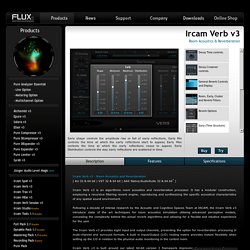 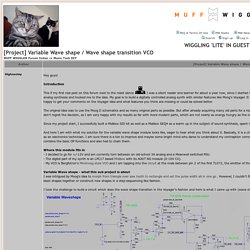 Introduction This if my first real post on this forum next to the robot dance I was a silent reader and learner for about a year now, since I started my project to build my own synth. It all started with the trailer of “I Dream of Wires" which led me to seriously dive into analog synthesis and hooked me to the idea. My goal is to build a digitally controlled analog synth with similar features like Moog's Voyager. It won't be a true modular, as I plan to build more compact, but the different sections will be independent. The original idea was to use the Moog D schematics and as many original parts as possible. Since my project start, I successfully built a Midibox SID kit as well as a Midibox SEQ4 as a warm up in the subject of sound synthesis, spent hours online researching on different forums, consulting schematics and finally bred boarding my first VCO.

And here I am with what my solution for the variable wave shape module looks like, eager to hear what you think about it. ReverbNation Discover. Dirk_Ehlert - Twitch. Voicians_ - Twitch. Old Movie Samples, Movie Dialogue Vol. 6, Vintage Film Dialogue Sounds, Vocal Loops, Loopmasters. Movie Dialogue 6 is an inspirational set of 610 separate Wav samples taken from original early Film Dialogue, all licensed for use under the new Creative Commons license agreement. 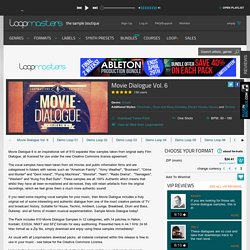 The vocal samples have been taken from old movies and public information films and are categorised in folders with names such as "American Family", "Army Weather", "Business", "Crime and Murder" and "Devil Island", "Flying Machines", "Monster", "Nam", "Radio Drama", "Teenagers", "Western" and "Kung Foo Bad Dubs".

These samples are all 100% Authentic which means that whilst they have all been re-mastered and de-noised, they still retain artefacts from the original recordings, which we feel gives them a much more authentic sound! If you need some inspiring vocal samples for your music, then Movie Dialogue includes a truly original set of some interesting and authentic dialogue from one of the most creative periods of TV and broadcast history. Brainchild (Remastered) Free Loops Samples Acapellas Vocals Downloads Royalty Free Music. Rolandcloud. Hall of Fame. In the years before his first real success as a composer, Elgar relied on choral composition for much of his income. 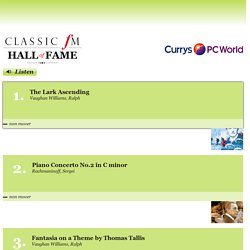 Unfortunately, these time-consuming, large-scale works were not always the most efficient of payers. Luckily for Elgar, he had been befriended by a senior figure at the music publishers Novello. August Jaeger was someone who genuinely appreciated his music and he was immortalised as 'Nimrod' in Elgar's Enigma Variations. In the 1880s Elgar retreated to Malvern, from where he wrote, bemoaning his fate to the ever-receptive Jaeger. Complaining of lean times, he sent Jaeger a violin piece called Evensong, suggesting the name could be changed to Vespers if needed. A couple of years later, Elgar wrote to Jaeger again, claiming to have recently rediscovered its companion piece. Find out more about Elgar on Classic FM.