Scto Grotesk – Schick Toikka. By the late 1800s, the grotesque had matured from a display novelty into a no-nonsense style that could be used for a range of applications. 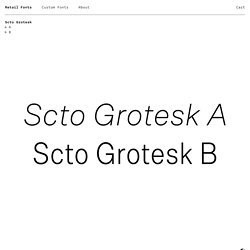 The mid-20th century saw a reappraisal of these classic sans serif forms. Fueled by modernist ideas, they were rethought and redrawn, now with consistent details and even text color. Transferred into systematic families of numerous weights and widths, the neo-grotesque became an essential ingredient of the International Typographic Style. To this day, it remains the go-to option for designers who are after a self-evident, transparent vessel for communication. Scto Grotesk is Schick Toikka’s very own take on this genre. The naming pays tribute to the tradition of typefaces that didn’t yet have names of their own, but were rather identified by the foundry or designer, complemented by a style descriptor. Webfont & Desktop font. Vesterbro Font Family - Befonts.com. Libre Baskerville Font Free by Impallari Type. This license can also be found at this permalink: Copyright (c) 2012, Pablo Impallari (www.impallari.com|impallari@gmail.com), Copyright (c) 2012, Rodrigo Fuenzalida (www.rfuenzalida.com|hello¨rfuenzalida.com), with Reserved Font Name Libre Baskerville. 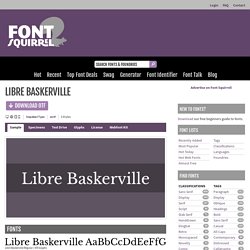 The OFL allows the licensed fonts to be used, studied, modified and redistributed freely as long as they are not sold by themselves. Prata. Domaine Display – Klim Type Foundry. Noe Display – Schick Toikka. Fonts Sorts Mill Goudy. Grumpy wizards make toxic brew for the evil Queen and Jack. 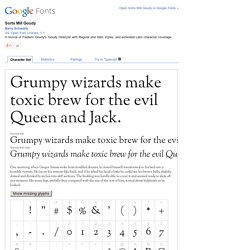 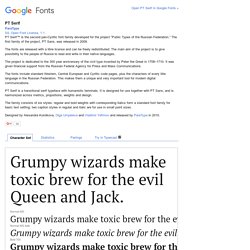 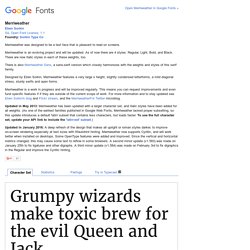 Merriweather is an evolving project and will be updated. As of now there are 4 styles: Regular, Light, Bold, and Black. There are now Italic styles in each of these weights, too. There is also Merriweather Sans, a sans-serif version which closely harmonizes with the weights and styles of this serif family. Designed by Eben Sorkin, Merriweather features a very large x height, slightly condensed letterforms, a mild diagonal stress, sturdy serifs and open forms. Merriweather is a work in progress and will be improved regularly. Updated in May 2013: Merriweather has been updated with a larger character set, and Italic styles have been added for all weights. Updated in January 2016: A deep refresh of the design that makes all upright or roman styles darker, to improve on-screen rendering especially at text sizes with ttfautohint hinting. 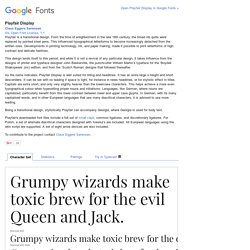 From the time of enlightenment in the late 18th century, the broad nib quills were replaced by pointed steel pens. This influenced typographical letterforms to become increasingly detached from the written ones. Developments in printing technology, ink, and paper making, made it possible to print letterforms of high contrast and delicate hairlines. This design lends itself to this period, and while it is not a revival of any particular design, it takes influence from the designs of printer and typeface designer John Baskerville, the punchcutter William Martin’s typeface for the ‘Boydell Shakspeare’ (sic) edition, and from the ‘Scotch Roman’ designs that followed thereafter.